Every hike has its season, and the season for Norvan Falls is pretty much now. Despite the fact that the falls are not spectacular, and that the hike is long and not especially interesting, we really enjoyed today’s trek. The light was perfect, the forest green was soothing, and the woodland flowers were blooming in profusion. Even the waterfall was in pretty good flow.

I don’t think I’ve ever seen this trail as dry as it is now. A few things have changed since I last hiked it in 2015. The big log bridge has gone, and a few cross ditches have been dug on what used to be the wettest section just beyond the Third Debris Chute. It also feels like the washouts have got larger. Most of all there’s now a giant logjam on Norvan Creek.

The trail was busy but it’s long enough for groups to spread out so it never felt crowded or noisy. As ever, not all hikers were appropriately attired for the trail – we saw a fair number of jeans-wearers along with a few just wearing street shoes or light tennis shoes. Many others were carrying precious little. Much like last week, not many people filled out the hiker registration form – about a dozen or so. Too few people take their ventures into the North Shore mountains seriously.

It seems that a lot of people walk the access road – more than before? – which means that car drivers really need to keep their speed down. We had one halfwit almost take us out because they decided that they could squeeze past a batch of pedestrians at a speed that was way to fast for that narrow road. Grrr.

There were birds aplenty singing in the forest too. Varied thrushes, wrens, robins, and numerous other tiny birds whose song I recognized but have never seen. We did see a couple of what I believe to be Swainson’s thrushes. And that rarest of all sightings: a park ranger!! :-) 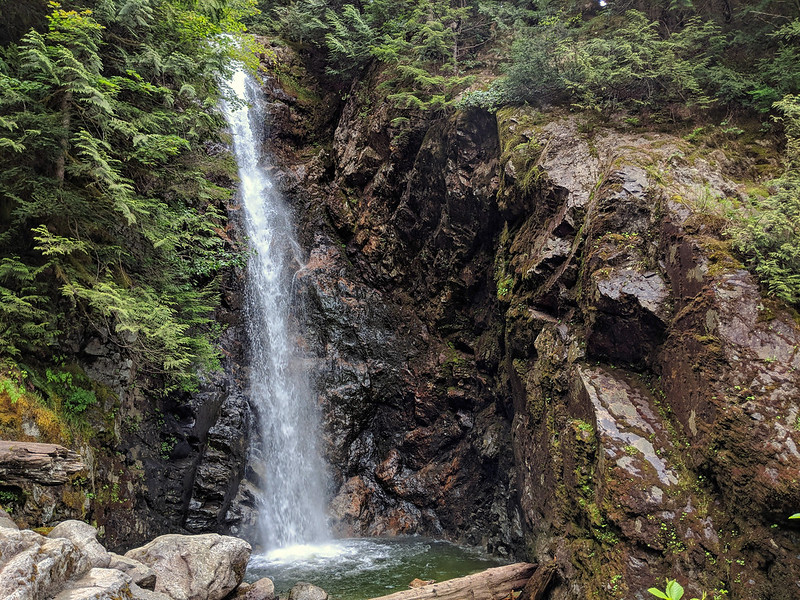