Opinion
Wow! At long last we make it into the Phelix Creek area and we were not disappointed. It’s stunningly beautiful, and although some of the mountain terrain is not to be taken lightly, there are plenty of options for exploration over the course of a few days. But we were on the receiving end of some of the most voracious mosquitoes we’ve ever encountered. They did not sleep….

Fact
The trail up to the lake was in great shape and easy to follow. It was a bit bushy in one of the clearcuts and in among the alder of the avalanche slide paths but the trail was still obvious. A couple of fallen trees make life a little more challenging with overnight packs but that was about it. Beyond the lake, a trail could easily be followed up to the Gandalf-Frodo col, and even for some of the climb up into the meadows below Gandalf and Aragorn. Descending from the lake below Shadowfax was easy thanks to a well-beaten trail though it became very bushy as it dropped down parallel with the creek/waterfall. We made one wrong decision as we crossed this creek: we picked the right-hand fork, but that petered out, so take the left-hand path instead.

The Phelix Creek FSR was actually pretty easy to drive, at least once past the rockslide near the beginning. However, the road is getting very overgrown and will leave its mark on your paintwork. If you care about the appearance of your car then this road probably isn’t for you. High clearance is definitely needed to tackle the rockslide, but it’s not too difficult as the rocks are rounded and can easily be moved or rolled out of the way. The slide is on an angle, which can be a bit unnerving if you’re not used to driving such uneven ground. After that, there were a few small waterbars and a few very rough patches that needed to be taken slowly, especially on the descent. Very wide vehicles might struggle to get through a gap formed by some fallen boulders around the 2 km mark between the two switchbacks.

According to the VOC website, the second bridge is not rated for vehicles any more, although it had a sign with a 2 tonne rating. We could easily have driven to this point (and beyond had we risked the crossing) but we ended up parking at a large landing where another couple of SUVs had stopped about 1 km before the bridge. This gave us about 2 km of walking to do on the logging road, which wasn’t unpleasant – this section is also good for walking – but some of that could have been avoided! (To be honest, you have to really ask yourself if you want to put your vehicle through all the above just to save an extra hour or so of hiking. It was satisfying to get up the road, but I have to wonder if it was really worth it.)

However, the main thing to note is that active logging will recommence there at some point in the near future. Creeks were flagged for culverts, rocks wrapped with tape marked the road centre-line, and falling-boundary tape littered the trees on the west side of the road. The tape was all dated 21-22 July 2018, but it’s not clear when they’ll start logging.

Wildflowers were plentiful in the forest and especially in the meadows. So much white and pink heather in bloom, they really dominated the landscape at higher elevations. Do I list them all? At mid-to-higher elevations there was lupine, valerian, white paintbrush, bog orchids, moptops (plus a patch of western anemone in bloom), arnica, partridgefoot, leatherleaf saxifrage, kalmia, purple mountain daisies, wood betony, some white rhododendron hanging on, a few alpine marsh marigolds here and there; in the forest, one-sided wintergreen, some pink wintergreen, even some Queen’s cup, Indian hellebore; in the clear cuts and along the logging road, thistles (amazing thistles!), pearly everlasting, fireweed. Special mention goes to a couple of glaucous gentian flowers that we spotted (somehow) along the heather above the lake beneath Shadowfax. We were especially pleased to find these, as it’s been a decade since we last saw them.

Our primary wildlife sighting was a gazillion mosquitoes and a smaller number of other biting flies. They were undoubtedly among the worst we’ve ever experienced, and they even remained active at night (which made nocturnal bathroom breaks an unpleasant experience). Fortunately they weren’t so bad at higher elevations, but then the horse-flies took over… Other wildlife included a handful of marmots lounging around on rocks by the upper lake, we heard frogs near our tent, and of course, plenty of birds in the trees.

The Brian Waddington hut was clean and tidy, and very welcome shelter away from the worst of the bugs. We pitched our tent in a meadow on the west side of the creek and slept quite comfortably there. However, there wasn’t as much good camping as I expected – just a few spots near the hut and again across the creek. I can see these areas being very wet earlier in the season, so I think we were quite lucky with our timing.

Just to reiterate, there is a voluntary closure of this area from 15th August to 15th October every year to avoid disturbing grizzly bears. While it is only voluntary, it is highly recommended that people avoid it during the closure. Please respect that closure and find somewhere else to hike. 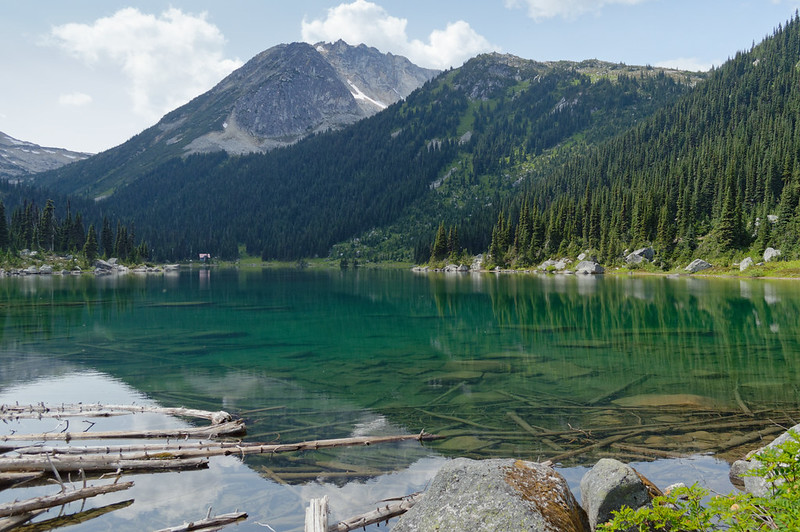 Story
As with our main backpacking trip in the Southern Chilcotins I think it’s worth me splitting this up into separate posts. Here’s a breakdown of the trip:

I’ll link to each day as I complete those posts.