Opinion
A superb updated trail makes this hike a really good workout alternative to Garibaldi Lake. Certainly Rainbow Lake isn’t as spectacular but on a clear day it has some great views, especially from the pass between Rainbow and Hanging Lakes. Today was cloudy and misty, with almost no views at all but it made for a very pleasant walk in the woods. The new trail eliminates all the slippery and uneven boardwalk, although it reduces the amount of time spent in open meadows. Trade offs had to be made I guess, but it should mean the trail can withstand the boot-steps of many more hikers.

Fact
The amount of work put in by the Resort Municipality of Whistler (RMOW) on the trail is nothing short of transformative. It’s been re-routed to avoid sensitive areas (and, in a wise move to anticipate increased numbers of hikers, to keep the water clean) and its decaying boardwalks and bridges. The trailbed is smooth the whole way up to the lake, with cross-ditches to ensure good drainage (all of which have either short plank bridges or are reinforced with rocks). The top surface will probably get muddy with some rain, but it looks like there won’t be any major muddy spots. I was impressed by how well the old trail has been decommissioned; I could barely believe a trail once existed in some places.

Other trail upgrades since our last visit in 2013 include markers every 0.5 km (complete with current elevation – thank you!) and three outhouses. The one near the lake was nice and clean; the one near the bridge at about 4 km not so much. Both were well-stocked with TP but no sanitizer so make sure to bring your own. Dogs are forbidden in the Whistler watershed of course, but there are still some people who either fail to miss the obvious signs or just ignore them in the belief that it doesn’t apply to them.

Parking is a potential issue as this trail becomes more popular. The lot was full when we arrived (though some folks were only venturing as far as Rainbow Falls), but we found an overflow parking lot on the other side of Rainbow Drive. This overflow lot could probably accommodate another 20 vehicles.

Flower season seems to have come to an end in the few weeks since we were last out on the trail. Even the fringed grass-of-Parnassus is starting to wither, and the pink monkeyflower is all but gone with just a few bright pink trumpets holding on. The only flower still actively blooming is fireweed. But as the flowers fade, the berries appear (edible and otherwise): star-flowered false-Solomon’s seal, false Solomon’s seal, baneberry, devil’s club, bunchberry, queen’s cup, rosy twistedtalk, clasping twistedstalk, thimbleberry, salmonberry, and of course black huckleberry and blueberry.

Bears were definitely active in the area as we found multiple piles of poop along the trail, as well as reports of a mother and cubs in the upper meadows near the Rainbow-Hanging Lake col. We didn’t see any though. We heard marmots, pikas, and some little birds in the trees, saw Steller’s jays and juncos, and Maria spotted a tiny mammal scurrying across the trail at one point, probably some kind of vole. Bugs were mostly non-existent though I did pick up a couple of mosquito bites. 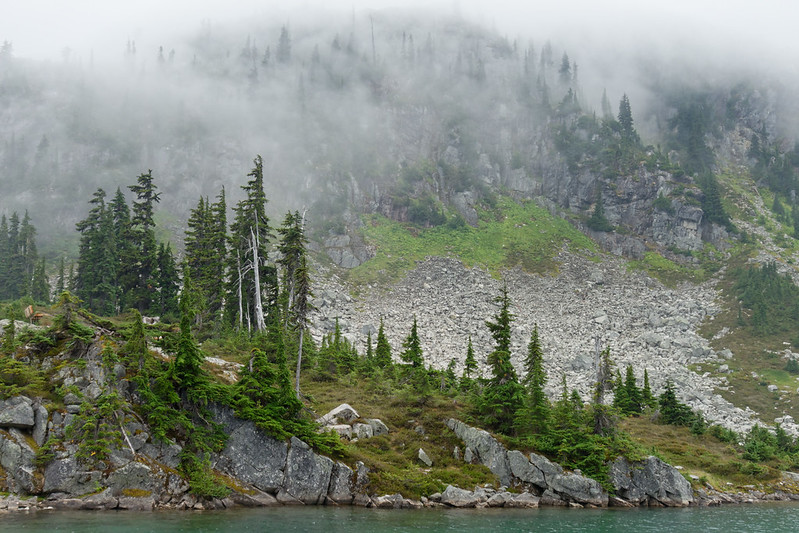