Opinion
Unremarkable but worth doing. It’s a nice enough hike for dull weather, even though the view was largely obscured due to rain today. Steeper with more elevation gain than I expected too. One big plus was that it was quiet; we saw only a few people.

Fact
We parked at the Baden-Powell western trailhead on Horseshoe Bay Drive, next to the BC Ferries terminal along with a couple of other cars. (Alternatively park at the Whyte Lake trailhead on Westport Road though this parking lot can fill up quickly on weekends.)

The trail is in fair-to-good shape, the initial section following an old road and later what appears to be more of a creek bed. No mud to speak of – yet! Deeper into the forest, pay careful attention to the trail markers as the trail itself is sometimes difficult to follow. There’s a lot of fallen and rotting trees in there and it all looks the same. The turnoff to West Knob is marked by pink flagging and a small yellow sign nailed to a tree – it’s easy to miss! The trail up to the viewpoint is easy to follow, a path carved out of the surrounding salal.

There’s not much of a view at the end, especially on a rainy day, but it makes a convenient turnaround point. On a clear day I suspect UBC is visible, and probably some of the Gulf Islands and Vancouver Island. You do at least feel a sense of achievement, looking over the forest through which you’ve just climbed.

Watch out for the burned area (from a fire in July 2018) between the two turnoffs to Whyte Lake. While the most hazardous trees have been cut down, there may yet be others that will fall over the coming months. The area is clearly cordoned off and is confined to the east side of the trail; thankfully the fire didn’t jump the trail.

Sights and sounds: snowberries, a small amount of fireweed, some decaying pinesap, Steller’s jays, Oregon juncoes. Lots of banana slugs and a sizeable snail. The leaves on the big-leaf maples are beginning to fall. 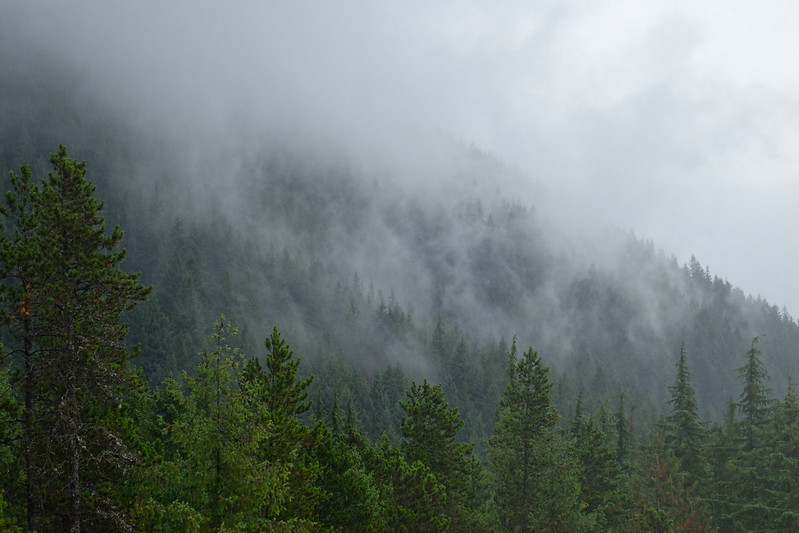