Opinion
There’s no doubt this is a beautiful destination worthy of its social media fame. And yet I find myself wondering just how good a hike it really is. Perhaps the Instagram hype got the better of me? The lake is smaller than you might think. Getting there is a bit of a slog, albeit with great views on a clear day, and you may get baked or drenched as there is no tree cover. As logging roads go, it’s a good one but at the end of the day it’s still just 2-3 hours of hiking a logging road before you get to the interesting stuff. Blah. But I do really appreciate that fact that it’s somewhere new, a place I would otherwise never have visited, and a place that is still stunning to visit.

Whatever you think of this trail, take a moment to acknowledge the immense amount of excellent work put in by members of the BCMC who built (and are still building) this trail. A big thank-you to them! Stop and chat if you see them, and say thanks!

Fact
The trail is easy to follow and for the most part not difficult. Orange markers are common enough to keep you on track, even in the section through the boulders in the old burn area. However, the difficulty of the trail ramps up once the logging road ends, especially if wearing an overnight pack. First the boulder field mentioned previously. Then the section cut through the slide alder which still has some tricky rocks and slippery alder boughs and roots to climb over. Once into the forest the trail is still so new that the surface hasn’t settled and it can be slippery. Finally the steep climb up between the edge of the forest and a talus slope needs care. It’s not as bad or as long as the final climb to Wedgemount Lake, but in some ways it’s not dissimilar. The trail in the old-growth forest is still being worked on so it can only get better!

The old logging road is well cleared of alder, although on the upper sections you can expect to still get soaked when it’s wet. Expect multiple small creek-crossings as well as a couple of patches of squelchy mud on the lower section. Patchy snow currently begins just before the cabin and is present across much of the campground.

The route around the lake to the campground is well marked and takes a conservative line across some big boulders. Expect to take up to half an hour to get from the cabin to the campground. It’s not trivial, especially with wet snow and ice!

The campground is well appointed with at least 9 wooden tent pads and a gravelly overflow camping area that could probably take at least another 6-12 tents depending on how near you want to get to your neighbour. It has an outhouse, and three metal food caches. The caches have suffered under the winter snowpack, and the tops are all bowed in. Wooden inserts have been put inside to try and stop them getting worse. The outhouse is clean and even had hand sanitizer though I wouldn’t rely on it always being stocked. However, it’s clear that the urinal was put in by guys who are 6-foot something or other. I was just tall enough not to need a step, but there wasn’t much margin for error…

While the BCMC states that open campfires are not permitted, I didn’t see any signs and of course that meant that someone just had to have a campfire. For some reason it looked like they decided to build it really close to their tent pad. They may have been the same people whom we had to ask to turn off their music too. Sigh. The lake is in a natural amphitheatre that reflects sound really well so voices easily carry across the lake.

The Mamquam River FSR is rough and potholed but easily drivable in any car. The Skookum Creek FSR has a split personality with sections that are exceptionally smooth and others that are rough and loose. My impression is that this road is still bedding in and is not yet fully compacted, leading to a few sections where the top surface is being torn up very badly, especially on hills. There aren’t many water bars but they’re often in the worst of these torn-up sections making high clearance vital. We made it without any issue with our CR-V but a regular two-wheel drive vehicle may struggle especially when the road is wet, and that will only make the road even worse. I wished for a low-range gearbox on some of the hills too.

Nothing to report on the wildflower front. Just one lone fireweed plant still hanging on. We treated ourselves to a few of the remaining frosty blueberries that exploded as soon as any pressure was applied. Tasty but very messy! Fungi are out in force though with many varieties showing off.

Wildlife: pikas galore in the rocks around the lake, and in the talus slope on the final climb to the lake. It was a treat to hear their little squeaks! Also numerous tiny birds in the trees, and a couple of varied thrushes. 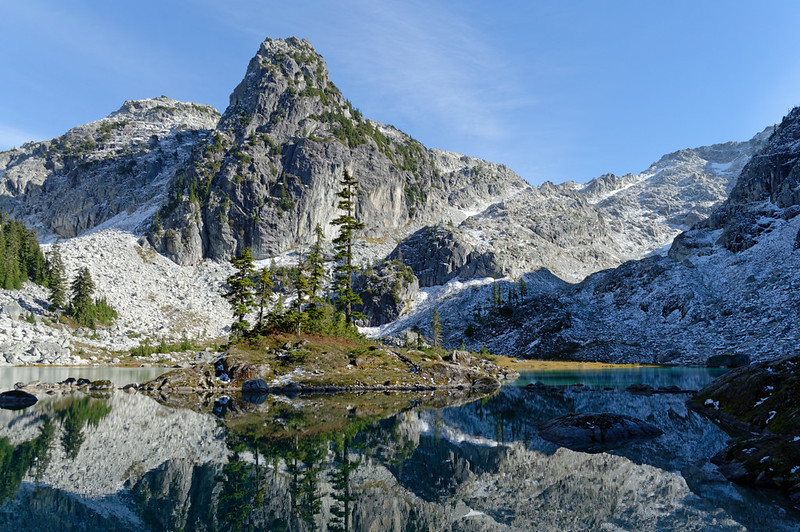