Opinion
Perhaps the nicest trail on the North Shore, but don’t tell anyone I said that. The first part to Dog Mountain remains a mess of roots and mud (as well as crowds of hikers), but once onto the Bluffs trail proper it is an absolute delight. But that doesn’t mean it’s easy: there’s a lot of up and down, and just when you think you’re done, there’s more! Despite its modest length, budget at least 3 hours and savour it.

Fact
The loop (I went clockwise) initially follows the trail to Dog Mountain so expect that section to be busy, muddy, and rooty. It’s deceptive, though, as it starts out really well-groomed with lots of nice even gravel. Then after only a few hundred metres it turns into the old root-and-mud fest. Personally I don’t mind that kind of “old-school” North Shore trail, but it’s definitely a rude awakening for people expecting an easy hike. I saw lots of families with kids, and plenty of folks with nice runners that were no longer as clean as when they started. (I must have stood out as the pretty much the only weirdo with a full hiking boots and day pack.)

The turnoff of the bluffs trail is taped off to prevent the majority of hikers from taking it by mistake. If you know where you’re going then it’s easy to duck under the tape and pick up the trail. I was hoping to not draw attention to it as I headed that way – I don’t think anyone followed but I can’t guarantee that some inexperienced hikers wondered what I was doing. Speaking of which, the only others I met on this trail was a trio who looked a little unsure of themselves and certainly weren’t well equipped for a North Shore hike. I have to wonder how they even got onto this trail – it’s not easy to find, and I would suggest inexperienced hikers go elsewhere first.

The bluffs trail is mostly a delight with a wonderful soft footbed and only a single hiker wide. Right now it’s nice and dry too. A couple of steep climbs have plastic braided “rope”, which aren’t needed for climbing up but may be helpful for descending if hiking the loop in the opposite direction (anti-clockwise). The three high-points along the way all offer wonderful views either over the city or of the mountains to the north.

Note that cell service is mostly non-existent on this trail! If you get into trouble you probably will not be able to call for help. Only up on the high-points was I able to get a signal.

A few fungi around but not as many as I was expecting. Berry bushes are hanging on to their leaves so there was a nice array of red and yellow on display which looked gorgeous against the green trees and blue sky.

Whisky jacks (Canada jays) and Steller’s jays were hanging out with the crowds at Dog Mountain; I only saw/heard/communed with ravens, mountain chickadees, and kinglets on the bluffs trails. 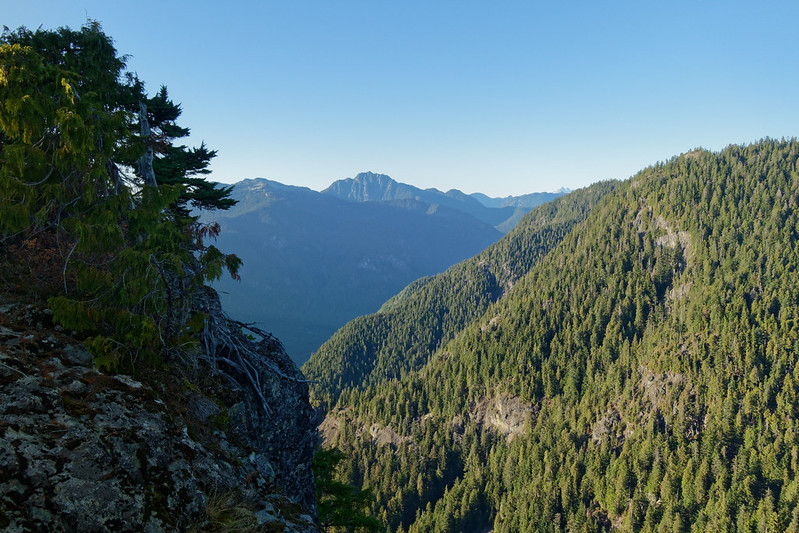 Story
I had 3 hours to fill on a sunny Saturday. I was already on the North Shore having dropped off Maria in Deep Cove, and decided to take in the Dog Mountain-Suicide Bluffs loop. It’s a trail I’ve done twice before and really enjoyed, and I thought it would be just the right length to fill the time as well as provide some wonderful nature time while the weather was good.

The Mount Seymour parking lot was surprisingly full when I arrived, showing just how many Vancouverites now seek the mountains on a fine day. I found a space and set about gearing up, lacing up my boots, initializing the GPS, etc. As I got out of the car I noticed how warm the sun was, and I wished I had worn shorts instead. Walking across the parking lot I could feel a spring in my step at being up here, and set off at a good pace. The trail to Dog Mountain started off as crushed gravel which was very easy to walk on. A sign at the junction warned of trail upgrades and I wondered if they had made more progress on this trail.

I kept my eyes open for fungi or other items on the forest floor (the first thing I noticed was some litter that went into my pocket…) The decaying leaves of Queen’s cup flowers caught my attention and I looked for any that may have retained their blue seed pod. I found two a bit later on as I came to a bit of a traffic jam.

Within only a few hundred metres, the gravel ran out and the trail reverted to its old self: a mess of uneven, ankle-twisting roots, rocks, and patches of mud. While not an issue for me, I suspect that took a lot of people by surprise, and I have to wonder if it’s a potentially serious safety issue. After all, the trail starts off so easy – why would anyone setting off believe that it wouldn’t continue this way? BC Parks needs to have its funding increased so it can pay to finish this job.

I powered on, excusing myself past a few groups of unsteady hikers, pausing here and there to let others through some particularly narrow or tricky sections. Only 15 minutes after setting off, I reached First Lake, its water level diminished from a hot dry summer. I often get a photo or two here, but today it wasn’t worth it. No light, no reflection, and not much water. The trail got a bit muddier beyond the lake. Not deep, boot-sucking mud but a surface mud borne of frosty nights, just deep enough to coat your shoes and muddy your trouser legs. I passed a few more groups, enjoying moving quickly and easily through the subalpine forest, and came up behind a larger group. Usually I’ll say something so I can get through but this time I just hung back – it would be difficult to get past that half-a-dozen people strung out along the trail with the traffic coming the other direction. However, I was a bit annoyed that they didn’t seem to acknowledge the fact that I might want to get past; they just kept on talking and walking (even though they were making reasonable time, just not quite fast enough for me).

Thankfully it wasn’t too much later that we emerged from the trees and onto the open bluffs at Dog Mountain. Yay! I scouted around for views and photos, trying to avoid the crowds, and enjoying the warm sunshine. A few whisky jacks and Steller’s jays flew around, probably alighting on outstretched hands here and there. I made a point of not paying attention so I would get annoyed by the feeding antics, concentrating on the views instead. More people kept arriving – the groups I’d been passing on my way here – and I heard a few exclamations at the view. I smiled to myself and thought how great it was for people to discover that view. I was genuinely pleased for these people and their achievements. At the back of my mind was an article I’d read this week about how experienced hikers can sometimes be a bit snobbish about the outdoors, and it spurred me to maintain a generosity of spirit.

As I headed back into the forest, a couple of hikers let me pass by (I guess I looked in a hurry :-) and when I got to the junction leading to the Suicide Bluffs trail, I tip-toed over as quickly as I could and dashed up the trail to try and get out of sight before anyone could notice that I had ventured into an area that looked closed. This junction is now well-labelled with how to get back to the parking lot and taped off to make it seem that there is no trail on the other side. Of course that’s not true as the trail is marked on OpenStreetMap based maps but it’s probably a wise move to reduce the likelihood of unprepared hikers taking the long way round. A short distance up the trail is a sign high on a tree labelling the Suicide Bluffs trail, with the (wise) words “rough route” written underneath.

I had ran out of breath after my sprint up the slope and I stopped to take in the forest around me. The late afternoon light shone through the trees, lighting up some colourful berry bushes near my feet. I could still hear the voices of hikers down on the Dog Mountain trail, muffled by the intervening forest. Having caught my breath once again I moved on. The route had materialized into a perfect little trail with a soft needle-y footbed, barely a pair of boots wide across the forest floor. It was blissful hiking. Sometimes I broke into a trot, something I never do, especially in hiking boots!