Opinion
Talk about a high reward-to-effort ratio! I’d seen plenty of photos from previous trips but nothing beats seeing the view of the ice shards and crevasses of the Coleman Glacier in person, all with a stunning view of Mt Baker itself. Not only that, the road access is largely paved. A great hike for a half-day of hiking, but we want to return with more time to explore the surrounding area.

Fact
I was surprised by the fact the road to the trailhead (road 39, aka Glacier Creek Road) was paved. The surface has washed away in places and some sections have some deep potholes that should be avoided. Bridge decks were very icy – we lost traction at one point where I was a bit too eager with the throttle. The final couple of hundred metres to the trailhead parking lot was a mix of compacted snow and ice. However, it didn’t seem to pose any issues for the majority of cars, most of which did not have snow tyres as far as I could see. We parked about 100 m before the trailhead.

The trail is very well-graded and easy to follow, even in the snow, until the third (?) major creek crossing (Heliotrope Creek). After that we followed a well-worn path in the snow until we came to the edge of the valley carved out by the glacier. The path continued to a small knoll, but we continued upwards for another 50 m to reach an unobstructed view point next to some trees. In summer the trail probably continues further up but we had no other info to go on so we stayed here.

The snowline was about 1100 m but many parts of the forest were snow-free, just a dusting here and there. The creeks were still flowing though they were quite low and mostly frozen over, posing no problems to cross. Once out of the trees near the end, the snow was probably 20-30 cm (at least, that’s how far into the snow I sank). Snowshoes were not at all necessary on the trail. However, microspikes were invaluable right from the start as the ground was frozen. Where there was snow in the forested section, it had been compacted to ice, plus many parts of the trail were just a sheet of ice where water had poured across from recent rain storms. We saw many other hikers (and skiers) with no traction devices, some of whom wished out loud for our microspikes. At one point a skier asked to borrow one of mine to make it up a slick slope that her partner had ascended but where she had become stuck. So glad I finally bought some recently!

Given that today was commemorating Veterans’ Day, parking was free. The Glacier ranger information station is currently only open on weekends until 3 pm. 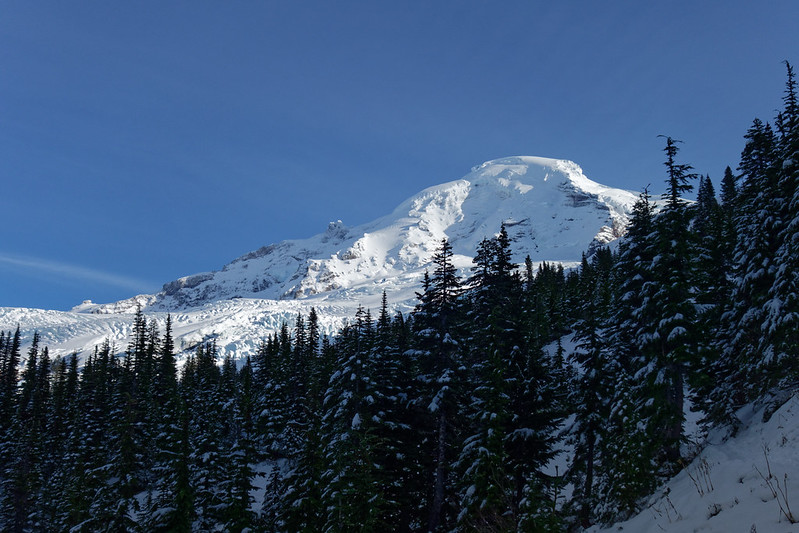