Opinion
An old favourite, and even after hiking it for the past decade and more, the views from the Chief are still worth every steep step, plus the hiking over the granite is simply a delight. A weekday in November might be one of the best times to hike it too. But the trail is definitely suffering.

Fact
A pretty quiet day on the trail. We still met a number of groups but none were large, and we had the trail to ourselves for much of the time. Much like last time, our approach was to head to Third Peak first and descend via the trail to Second Peak. However, this direction should not be attempted during busier times; it’s just too congested and too narrow for groups travelling in opposite directions to pass easily or safely.

The trail up to (down from) Third Peak was in pretty poor shape and easily lost. I remarked on this 18 months ago but had since forgotten. Keep an eye on the yellow trail markers on the trees for guidance. There was plenty of water running which added to the confusion. For the most part I hiked up the stream bed as the rocks were much grippier than the neighbouring roots, which were extremely slick. Other than that, not much has changed. It’s steep, but with lots of good steps which makes for easy travel. (Note I said easy travel, not that the trail is easy!) Watch the wooden steps, though, as they can get slippery in the wet.

The views are still great though. Tantalus, Garibaldi, and Mamquam were white with fresh snow, as was Sky Pilot. Were it not for the cold northerly wind, I could have sat and looked

Not much wildlife today, other than a soaring eagle above us at Third Peak. Didn’t even see any chipmunks, but did hear a few chattery Douglas squirrels.

The campground has new fencing to keep people off the vegetation, and there’s a new sign forbidding the use of drones. The gate to the summer campground parking is now closed. The outhouses had TP and hand sanitiser. Today I was struck by how much noise could be heard from Squamish, mostly some kind of construction (a pile driver or jack hammer), and saws from the timber yard. 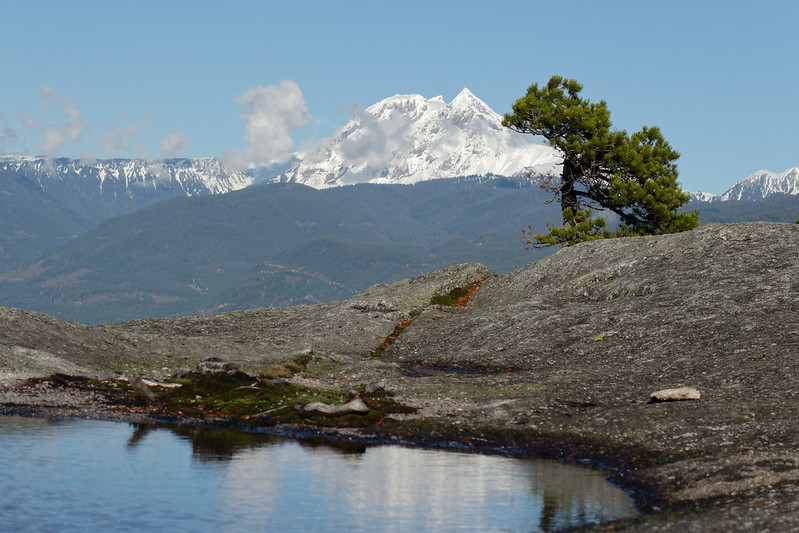 Story
A grand day out…