Opinion
As a way to get several hours of uninterrupted alpine sunshine, Elfin Lakes is a great destination. I don’t rate it as the most interesting of hikes – it’s long and the view doesn’t change much – but the views are superb and the lakes make a great lunch spot. Just don’t feed the birds: they don’t need your food, and they’re aggressive enough as it is.

Fact
Snow began at about the 2.5 km mark, just beyond the bend in the road with the waterfall (which I call Zig-Zag Falls). Between that point and the warming hut at Red Heather Meadows, the snow was compacted and very icy. Microspikes were invaluable here, but not really needed after that as the snow was firm enough to walk on, pretty much at a normal walking pace. I actually found it to be easier going than in the summer when walking on the gravel and rocks.

At the lakes the snow was perhaps up to 30 cm deep and just firm enough to make it seem that it would hold your weight before giving way. However, in places it wasn’t deep enough to cover the heather fully which was being exposed and then walked on (we saw the same thing near Artist Point last week). Please take care to stick to trails or wait until the snow is deeper. It looked like the most recent weather system dropped rain on the snow along the route, which created some nice patterns. The lakes were frozen but not yet snow-covered. They seemed to be firm enough to walk on, at least near the edges but I can’t vouch for further out. We met a park ranger who said the hut was full overnight but the campground was (perhaps unsurprisingly) mostly empty.

The access road was snow-free with just a couple of icy spots beyond that final steep switchback corner. The section after the chain-up area was very bumpy and rough, and low-clearance cars might bottom out in a couple of extremely rough spots unless they’re taken slowly. The parking lot was maybe just over half-full. The outhouse at the trailhead had sanitizer; those at the campground did not.

Wildlife was limited to whisky jacks (Canada jays) and ravens, though we saw deer and ptarmigan prints in the snow. While many of the groups were eager to feed the whisky jacks for Instagram photo-ops, I was happy to see that the group who sat with us at one of the picnic tables seemed to have the same appreciation for LNT as we did. Of course, that didn’t stop the birds trying to grab food from our hands. Mind you, their boldness also led to a few good close-up photos of the cheeky little birds as they swooped in to search for and/or pick up any crumbs left by previous hikers. 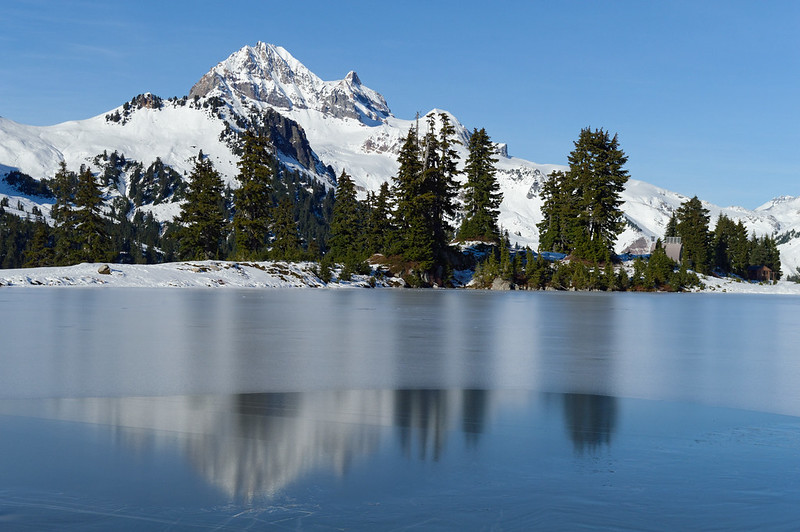