I’m not much of a runner, but occasionally I like to pull on a pair of running shoes and set off on a short circuit, usually somewhere in the range of 3-6 km. I was a sprinter as a teenager, so running several kilometres is something I never thought I’d do. However, it’s a convenient way to fit in a burst of cardio exercise as it doesn’t need much gear, and it’s possible to run almost anywhere. In Vancouver I tend to run from our front door, selecting any one of a number of variations of along-down-up-along again to create a sectional loop. But I prefer to run on trails when the opportunity presents itself.

And so it was that I found myself with an hour or so to fill, a sunny day, and an easy riverside trail only a short drive from where we were staying with family. I parked the car, and set off across the road. The main challenge at the start was to get across the multiple lanes of traffic at the vast roundabout where the A331, A30, and A321 intersect. Once over, I picked up the trail alongside the River Blackwater, following it north-west under the trees, a fenced meadow to my right and a business park to my left.

For the first couple of hundred metres I felt great, but then I hit the first moment where I wanted to stop. I knew it wouldn’t last, and I was determined to keep going, pushing through that physical/mental barrier to complete the first kilometre with relative ease. The buildings ended and the river was now surrounded by open meadows, presumably once livestock grazing areas that gave the area its name.

I encountered numerous dog-walkers, all of whom were courteous in either keeping their dogs under control, or apologizing profusely if I appeared even slightly inconvenienced. (Sorry Canada, we Brits apologize way more than you do!) But for the most part, the trail was quiet. I rounded a bend and saw a pair of Canada geese with goslings on the water, which prompted me to pause and record the scene – very pastoral, very English. 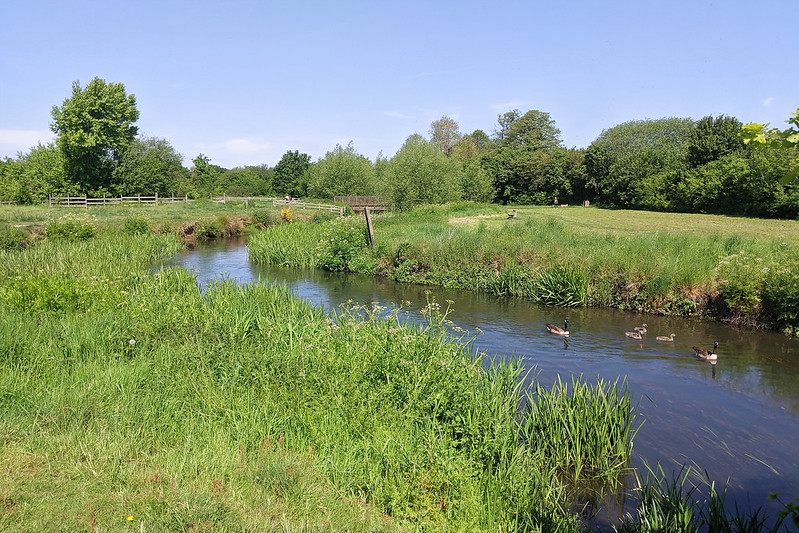 By now I was beginning to flag but I was determined to keep going, and not give in to walking too soon. Looking at the map, I decided to put in a bit of extra distance for fun by running around a small pond dotted by geese, ducks, and a few coots. I instantly regretted it as my legs now felt like lead and after circumnavigating the pond, I was glad to encounter a railway bridge which forced me to slow to a walk.

Up and over the bridge, pausing long enough to photograph the long straight tracks below me, through a gate and onwards again. The meadows had ended but I was still mostly under welcome tree cover. Now to my left were small fields with horses, one of which was scratching a posterior itch on the support cables for a telephone pole. I slowed to a walk here, vowing to start running again when I returned to this point after turning around. Walking to the next field, I saw half-a-dozen Shetland ponies, a couple of which were right up against the fence. They were far too cute to ignore, so I said hello to a couple of them and took some pictures before walking on. 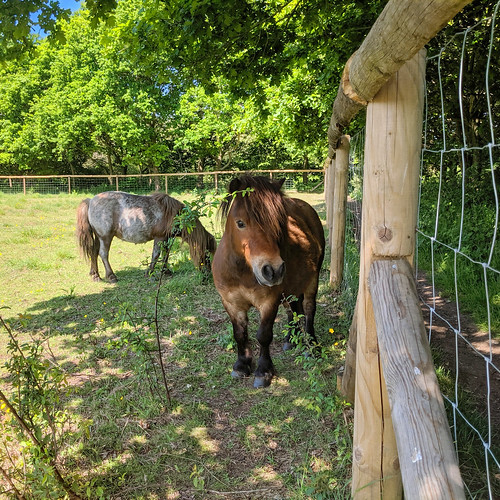 The trail ended at the next road, a Hampshire sign visible on the opposite side, barely visible above the brambles and nettles. I stopped long enough to admire the view of the river, the northern bank completely buried in nettles (which brought back some less-than-fond memories from my childhood…), before turning around and getting back under way. I stopped again to chat with the ponies before picking up my heels and retracing my steps.

Although I was tiring, I was happy to keep running, determined to keep up my pace. I took an alternative path across the meadows, joining up with the main riverside path a few hundred metres further along. I promised myself a short walk-break as I crossed the river again before finishing off the run back past the business park. Passing the Berkshire county sign, I dashed across the six lanes to return to the car, happy to have got a few running kilometres under my feet.

As I said, I’m not much of a runner, but when I give myself the chance, I do enjoy it much more than I ever expected.

Distance: 6 km
Elevation gain: 10 m to get over the railway bridge
Time: 50 min