Opinion
Wow! I’d been putting off this hike for so long because it looked steep and not particularly impressive (the photo in the Copelands’ guide book is not at all inspiring!) but this is an exceptional hike with superb meadows and fantastic 360-degree views at the summit. Don’t be put off by the number of switchbacks, it’s well worth pushing through and getting to the top. Great flower meadows now which would be awesome in the Fall too with lots of colour. We’ll be back!

Fact
The road to the trailhead was rough in spots and the fording of Fossil Creek may prove an obstacle for low-clearance vehicles. The creek itself wasn’t a problem but the berm on the east side of the creek would require care for low-clearance vehicles. Other than that it was easy to get to the trailhead. The parking lot is quite big but it was still full by the time we arrived, and we had to find a space along the road. About another dozen cars were parked along various stretches of the road from the last switchback before the parking lot. There’s an outhouse at the trailhead.

The trail was being worked on by a Washington Trails Association crew, who were extremely good at watching out for hikers and letting us past. I’d happily wait for them at their convenience but they were very quick to get out of our way. Thanks for everything you folks do: the trails in WA are amazing! Higher up we had a few fallen trees to deal with, most of which were easy enough but one either required a tricky clamber over or a steep detour on loose ground. The rest of the trail up to the meadows was in superb condition and despite the number of switchbacks, their grade was just enough to gain the required elevation quickly.

In the meadows the trail narrowed and was muddy near the creeks that become Deerhorn Creek. It was still possible to keep to a defined trail though and there was no need to widen or create new trails. Higher up there were a few snow patches that posed no problems for travel or navigation. They’re melting fast and I suspect they’ll be gone in a couple of weeks. Again, the rest of the trail was in great condition, although it was only one person wide for the most part. It was not always easy to find a spot to step off the trail to let people pass without stepping onto the meadows either. (Remarkably the vast majority of hikers yielded without question to uphill traffic: I was amazed and delighted!)

The summit area is small but still big enough for a dozen people or so to sit and admire the view. The views are superb! The true summit of Church is an exposed scramble about another couple of hundred metres away that didn’t look too inviting to me.

There isn’t a great deal of understory in the forest, so flowers were few and far between. We saw fairyslipper orchids, twinflower, strawberry (including some tiny strawberries!), queen’s cup, salmonberry, coralroot, pine drops (I think), Oregon grape, pipsissewa (spotted wintergreen) and other wintergreens in bud. In the meadows there were glacier lilies (of course), lots and lots of alpine marsh marigolds, spring beauty, Indian hellebore (corn lilies) starting to grow, small-flowered penstemon, Alaska violet, American bistort. Near the summit were rosy pussy toes, red paintbrush, spreading phlox, fleabane, and stonecrop.

Bird song was ever present, mostly hermit thrushes and varied thrushes. Bugs were around in small numbers, but I definitely encountered some hungry ones: I picked up about half-a-dozen bites, including at least one from a horsefly. We heard marmots whistling in the meadows, alas possibly in response to at least one person’s unleashed dog. We never did work out whose dog it was: it seemed to spend all its time wandering without anyone calling it back. Not impressed. It wasn’t the only off-leash dog, but thankfully most were well behaved. However, at least two dog owners didn’t pick up after their dogs, which had left their mark right on the trail. Definitely not impressed. 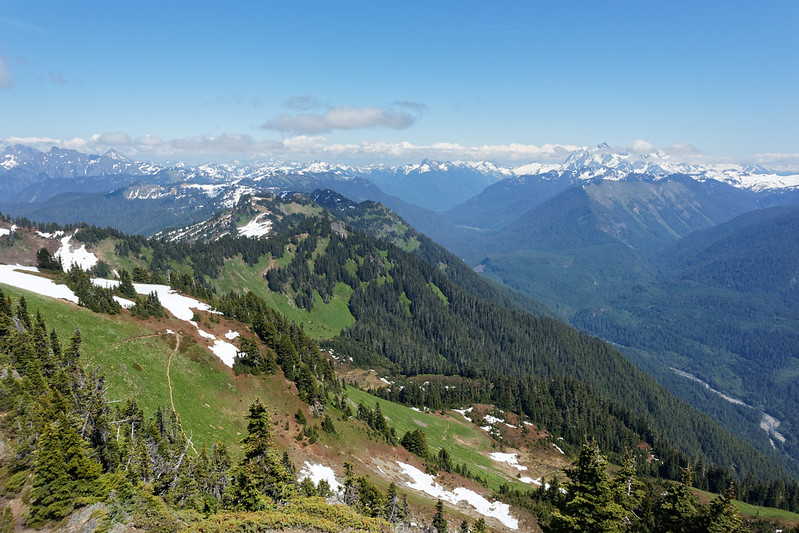