Opinion
As a Plan B for the weekend it was superb, but this area is definitely a Plan A kind of place. Easy hike in, gorgeous flowers and lake, and a couple of easy ways to get good views: going as far as the sub-summit on Gott Peak offers up vast views all around. I may have missed the peak of the glacier lilies by a couple of weeks, but the other flowers (and in particular alpine marsh marigolds) were more than making up for it!

Fact
The road is in good shape, as it was last summer. The water bars are plenty and not always obvious (so best keep your speed down). We had no issues getting to where the old trail turns away from the recent logging road spur, despite a fairly deep initial water bar, and a double feature with water running through one of the cross ditches. High-clearance makes the road much easier, though many of the water bars could be tackled with lower clearance and the right technique.

The trail (or rather, the old mining road) is also in good shape and makes for easy and quick walking, even with an overnight pack. As ever a little bit of running water in a couple of places. The trail through the wet meadows to the lake was as wet as could be expected this early in the season, though it wasn’t deep (apart from a couple of puddles). It was hard to avoid the flowers in some areas but the path was otherwise obvious. Crossing the outlet stream from the lake required careful rock hopping as the water level was high.

Higher up towards the pass, there was a bit of snow still on the road near the last switchback that is currently preventing vehicles from reaching the pass. The route up towards Gott Peak was partially snow covered but for the most part we could follow a beaten path to the awesome views.

Since the meadows were so wet, camping spots were few and far between, something I always suspected. We found some space between rocks and roots on a bare area that had two (!) fire rings. Our camp sites from last summer were still a bit damp, though still usable. The obvious green area for camping was damp but good enough for our camping neighbours. I personally don’t like that spot as it has a huge fire ring which I’d rather see others use; if I camped there I wouldn’t use it and so others would likely be tempted to create a new one. There are no facilities here, so practice your best Leave No Trace techniques! There are plenty of good trees for hanging Ursacks.

Flowers were many. Glacier lilies were mostly done, with just a few patches in sheltered spots by the trees (that’s the last 4 hikes I’ve seen them though!). The main stars of the show were the white alpine marsh marigolds which were covering the wet meadows! I’ve never seen so many! On the logging road we saw many Columbia lilies, much cow parsley (we hope…) and red paintbrush. On the walk in we saw lupines, phlox (lots of phlox higher up too), common butterwort, white and green bog orchids, and western columbine. In the meadows were also globeflower, lots of kalmia, some white paintbrush, sticky false asphodel, white and pink heather. Other flowers included western anemone, goldenrod, silky phacelia (sky pilot), skunky Jacob’s ladder (also, sky pilot!), Tolmie’s saxifrage, alpine pussytoes (which must be among the cutest budding flowers ever!), alpine lupines, arnica, moss campion, sulphur buckwheat, cinquefoil, and alpine buttercup. And probably others too!

The bugs were definitely out and hungry, though thankfully not bad enough to need a head net or bug spray. I came away with a dozen or so itchy bites. Butterflies came to visit us on the sub-summit of Gott. Birds were singing all around us – the only ones I recognized were varied and hermit thrushes, Clark’s nutcrackers, and a bald eagle eyeing up the fish in the lake. We heard and saw marmots on the higher slopes at and above the treeline; grouse, chipmunks, and a doe and fawn along the road. Plenty of bear poop (some very fresh on our drive back down) but no signs of bears near the lake. 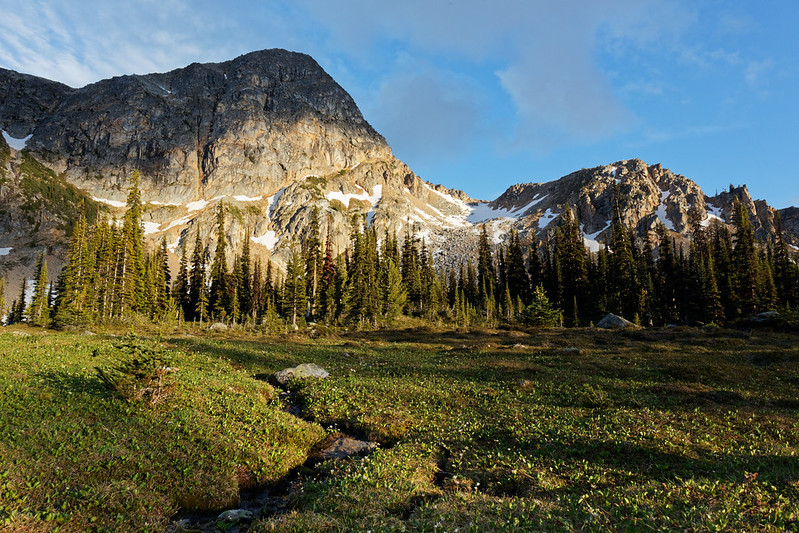