Opinion
A great option for a quieter and tougher hike, though not recommended for beginners, and it probably shouldn’t be your first backpacking trip of the season! Don’t be fooled by the modest stats to the lake as the trail has a fair few obstacles, including boulder fields and fallen trees, and uphills on the descent. It’s hauling more than hiking in places but the payoff is beautiful, untouched montane forest rich in flowers at this time of year. Heading up to Rainbow Mountain was tougher than we expected, so that’ll have to wait for another day, but there are many other options for exploration.

Fact
The road to the trailhead is rough in places, with many potholes and two sharp little water bars that may require reasonable clearance to get through, but is easy 2-wheel drive all the way. There is space for maybe half a dozen cars at the trailhead, which is well marked immediately after the second water bar.

The trail is, to be honest, a delight – with caveats. It’s mostly a single-track footbed the whole way to the lake. But there are sections of boulder field where the trail is not obvious, and multiple large fallen trees to get over. One tree had fallen across the trail that required us to remove our packs and squeeze under it. Beware: it had many pointy bits on it! It had some muddy spots, and the plank bridges were really slippery after the recent rain, but no snow until the meadows by Hanging Lake.

The route has bridges over all major creeks and planks through the wettest bogs. The bridges are all intact. We encountered one large area of blowdown that has completely covered the trail which would require a serious investment of time and effort to clear. Thankfully, a flagged route has been put in to make it straightforward to get around.

We attempted Rainbow Mountain but barely made it half way. There was an obvious trail to begin with which petered out in wet meadows. Occasional flagging and cairns kept us on the right track, but when considering our descent, we opted for a more direct line which seemed easier more efficient. Eventually the cairns ran out and we were left trying to interpret the book description. But time and the weather forecast were against us anyway and we turned around before reaching the saddle mentioned. We explored in the direction of Beverley Lake though the trail ran out before we reached any view of the lake, and we turned around at a bench overlooking the Beverley Creek valley.

Camping at the lake is best on a raised bench on the east side, especially at this time of year when the meadows are still very wet. The camping area was still partially snow covered but we had no issues finding a clear spot to pitch. The outhouse is very new and still smelled sweet! Whistler parks staff seem to keep it stocked with TP. Apparently there are plans to put a food cache in place soon as well: currently campers need to hang food in the trees (of which there are plenty).

Since this is now officially grizzly country, we ate and stowed our food well away from where we slept, trying to keep to the 100-m rule. Of course, people had had fires all over the place, including down in the meadows. Previous campers had clearly tried to burn some quite large pieces of wood too (sigh). We saw only three other groups at the lake, two of which had their own campfires right next to their tents, which is also where they ate. What can you do? :-/

Varied thrushes and hermit thrushes kept us company most of the weekend. We saw whisky jacks, red crossbills, dark-eyed juncoes, a hummingbird (briefly!), and heard wrens and nuthatches in the forest. We also saw two small toads, heard marmots and pikas, and were scolded by a few Douglas squirrels. No sign of bears at any point, except for some very old scat on our way up Rainbow Mountain. 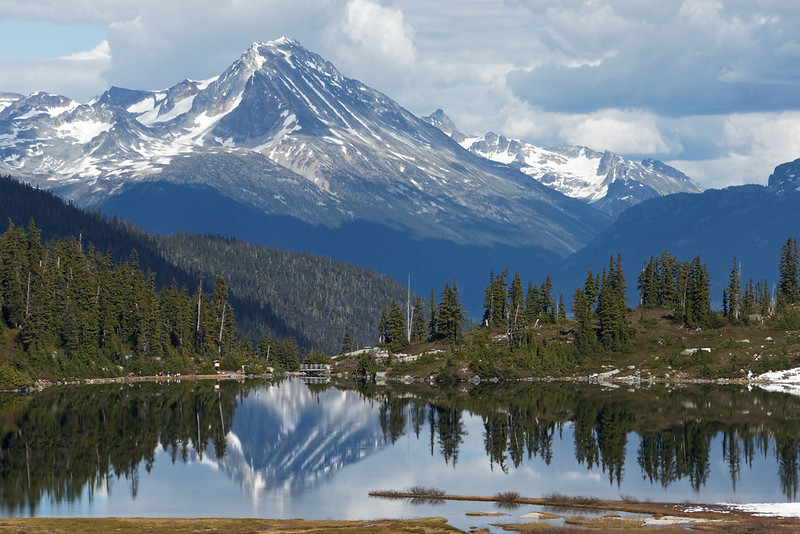