Opinion
This might be a new contender for the best trail in the Whistler area. If not then definitely in the top 5. A steady climb is followed by some sublime sub-alpine wandering through pocket meadows that always invites you to see what’s around the next bend or over the next rise, culminating in a superb lunch-spot with views over to Whistler and Blackcomb mountains. The descent from Iceberg Lake is remarkably smooth and speedy. Definitely best done counter-clockwise as suggested in “105 Hikes”.

Fact
Parking is an issue for this hike. When we hiked the Iceberg Lake trail back in September 2017, we could park in the turning circle at the top of Mountain View Drive. No more and now parking is limited to a few spots on the even-numbered side of the road. Pay close attention to the street signs! The official parking is down at the Meadow Park sports centre over 1.5 km from the trailhead. There does seem to be space at the end of a dirt road that heads up from the end of Valley Drive though it’s not clear how long that will remain viable as non-resident parking gets squeezed out more.

We followed the counter-clockwise route outlined in “105 Hikes” and think that it’s the best way to do it. Be aware that the conceptual half-way point of Iceberg Lake is actually at about the 2/3rds mark so budget your energy accordingly. The trail is fantastic, with no major mud or navigational issues. Just be aware that portions are shared with mountain bikers, although we saw none. A map is invaluable as there are many intersections with other trails and even though many are marked: the Whistler website has one that is useful as it labels the trails, but please back it up with a proper topo map too.

The suggested detour to the Valley Overlook is well worth doing, and Screaming Cat Lake was much prettier than I expected. Above the trees, be sure to follow the cairns and markers, although the trail-bed is evident the entire route. The descent to Iceberg Lake was not as long or steep as we expected, and initial descent from Iceberg Lake requires some care as there are loose rocks and gravel. There is still a significant amount of snow at Iceberg Lake, and the outlet creek has a very tempting snowbridge over it. While it supported us and a few more hikers, I imagine this will weaken considerably in the coming week or two so is probably best avoided from now on.

The alpine flowers were pretty much at their peak with bountiful displays of arctic lupines, Sitka valerian, and pink and white heather. Hellebore was abundant though rarely actually in flower, while partridgefoot decorated many rocks. In wet meadows leatherleaf saxifrage, white and green bog orchids were plentiful, accompanied by white alpine marsh marigolds and sweet coltsfoot. The outlet creek from Iceberg Lake had an exceptional display of pink monkeyflower and broad-leaved willowherb, with yellow monkeyflower and alpine willowherb playing a supporting role. In the forest we saw pink wintergreen and/or pipsessewa, elephant ears, queen’s cup beads, rattlesnake plantain, wild ginger (still!), Columbia lilies dying back, and white rhododendron. To our amazement, we even found some glacier lilies blooming along the outlet creek near the bridge! That made my day, I can tell you!

Bugs were a serious nuisance with many hungry mosquitoes and other flies. Not a good day to leave our bug shirts at home! The only other wildlife sighting was a couple of pikas at a rock slide. On our descent we passed as sign warning of grizzly activity barely 5 days earlier, but all we noticed was a few piles of scat. 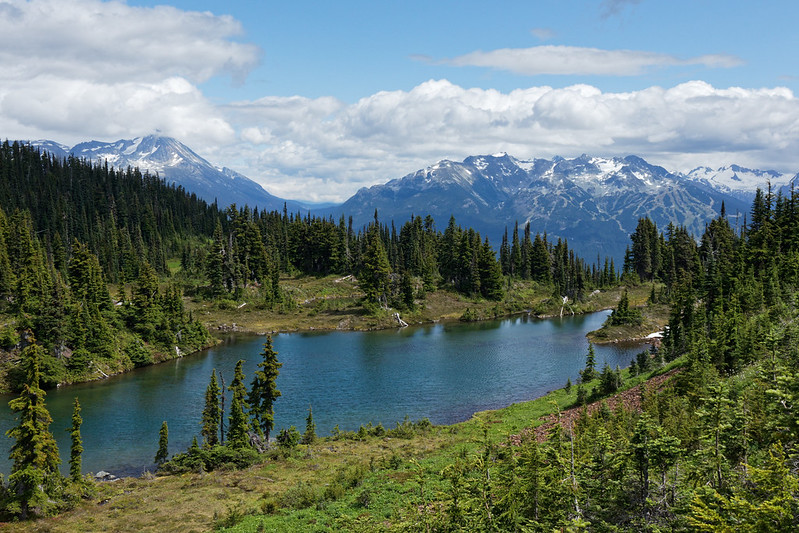