Opinion
Without doubt one of the best backpacking experiences in BC and the Canadian Rockies, especially at this time of year when the larches turn golden, with easy, mellow hiking and stunning grand vistas. It’s tough to get to, requiring 2-days each way for most hikers, and needs another 2-3 days on top of that to fully appreciate it. The Mount Shark approach is a bit boring but easier hiking than approaching from Sunshine, and has more options for splitting the journey in a sensible way. Going in through Assiniboine Pass and out via Marvel Pass minimizes the elevation gain with a full pack. Like many places, it’s become very popular, especially with non-hikers (who can pay for a helicopter ride), and that shows in places, but mostly the effects of more visitors seem to be well managed. 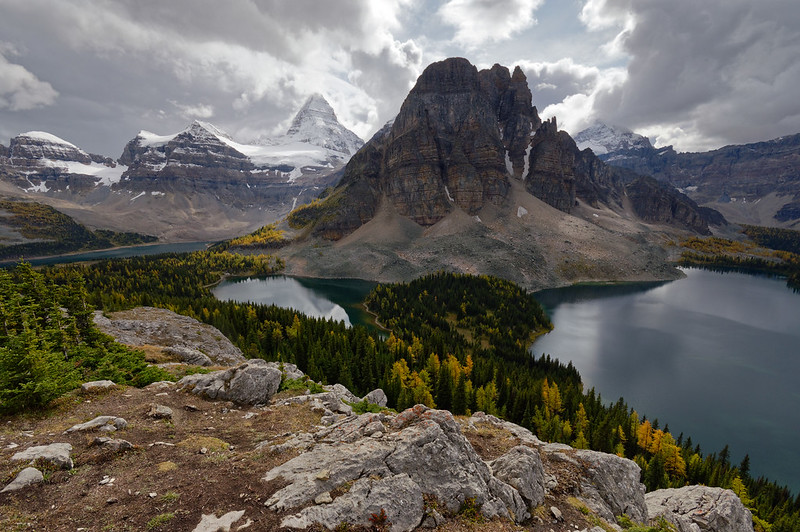 Fact
The Mount Shark trailhead is about 50 km south of Canmore, most of which is gravel (and a large fraction of that has a speed limit of 80 km/h). The road is wide and allows relatively speedy travel once on the main stretch alongside Spray Lake, but it has some very washboarded sections that will try your tolerance for vibration. The turnoff for the trailhead itself is signposted. Take care along the road, though, as there are numerous trailheads where cars line the road. Watch for hikers.

The trailhead parking area is huge, and has four washrooms (equipped with TP and sanitizer). Check the signboard for which way to proceed as there appear to be multiple trails leaving the parking area! If in doubt, follow signs to Watridge Lake to begin with.

Our route in took us up Bryant Creek to Assiniboine Pass and then into the core area. From there we explored the nearby lakes, Nub Peak, and the Wonder Pass area. Hiking out, we went back through Wonder Pass down to Marvel Lake, rejoining the Bryant Creek trail at about the 13 km mark. The trail in to the core area can be broken down into several sections and all junctions are well signposted (though the distances don’t always add up). All sections are easy hiking, with the trail between the trailhead and the Marvel Lake junction (at about 13 km) wide enough to hike side-by-side (a good morale booster!). There were patches of mud in places but they were mostly easy to walk through or avoid without going off trail. The mud was great for checking for animal tracks.

Beyond the Marvel Lake junction the trail became narrower and a bit more enclosed, staying within the forest close to the wide open grass and willow meadows of Bryant Creek. It passed through a few meadows before climbing, gently at first then considerably steeper, in the forest towards Assiniboine Pass. There were good views from time to time, but much of the trail is viewless. At this time of year the hikers’ high trail from Allenby Junction to Assiniboine Pass is closed to give grizzly bears their space, so we followed the lower, horse trail which was not as muddy as we expected with just a few mud holes. However, on some sections we were hiking in a shallow, muddy trench. Still, at no point was the mud so deep that would couldn’t just walk through it.

Beyond Assiniboine Pass (which is forested), the trail was in great condition and easy to follow, again thanks to plenty of signage. Unfortunately the direct trail to the campground was closed (it had recently undergone considerable work but was suffering again due to a combination of hiker volume and rain) so we were directed onto the trail that descends to Lake Magog. Again, no significant issues with mud and way-finding was easy, albeit with an unwelcome small gain in elevation on entering the campground.

Trails to neighbouring points of interest were well marked, easy to follow, and in good condition. The area around the Nublet and Niblet has seen a lot of foot traffic in recent years so there is now quite a network of little trails leading all over the ground. (Try and stick to the best worn trails if possible.) The route along the ridge to Nub Peak was evident, with a significant slope leading down to Elizabeth Lake that could be unnerving for some. The way up to the peak from there was obvious, with a couple of (incomplete) trail options.

In the Wonder Pass area, an unmarked but clear side trail leads to a great viewpoint. Don’t worry about it losing elevation: you will emerge on an open grassy bluff, and be able to get some great views of Mount Gloria, Gloria Lake, and the southern side of Mount Assiniboine itself. However, an even better viewpoint is on the ridge above this side-trail (and marked on Open Street Map, whereas the ‘official’ trail is not). A faint trail leads off through grass, barely 100 m along the side trail, towards a boulder field, then across the boulders and joins an obvious steep diagonal route up to the ridge. From there it was easy trail-less walking to the end of the ridge (and an Alberta survey marker) with stunning views. However, be sure to take note of where you ascended the ridge so you can retrace your steps safely.

The return leg via Wonder Pass is stunning, with great views at the pass, and then along the many debris and avalanche slopes above Marvel Lake. The slopes of Marvel Peak and Mount Gloria are especially jaw-dropping. However, the trail is nothing but rocks and by the time we were half way, we were wishing for soft forested hiking trails. We dropped back into the forest to camp at the Marvel Lake campground, before rejoining our route in the next morning.

There are campgrounds at 9 (Big Springs), 13 (Marvel Lake), 14 (McBride’s camp), and 17 km (Allenby Junction), all in Banff National Park. There’s also Bryant Creek Shelter at 13.5 km. We stayed at Allenby Junction (5 spots) on the way in and Marvel Lake (10 spots) on the way out. Allenby Junction is not a great campground: none of the 5 spots was level, and only 2 offered any treed shelter. Each was barely big enough to set up a 2-person tent. Marvel Lake is much nicer and many of the spots are big enough to host 2 tents. Each campground has metal food storage lockers (bring a carabiner to lock) and low-rise “tables” for dining, situated 100-200 m away from the camping area. (It feels a long way in the dark!) Marvel Lake also has a full size picnic table. There is no shelter at either campground. The outhouses are wrapped in wire to prevent rodents chewing them. BYOTP. Both campgrounds are next to creeks, though the one at Allenby Junction was partially blocked by rocks (possibly from a rush of meltwater or rain?) so it pooled and disappeared underground. However, the creek was running freely only a few metres upstream.

We stayed at the Lake Magog campground in Mount Assiniboine. By comparison with the Banff backcountry campgrounds, this campground is luxurious with a covered (though open) cook shelter housing 6 picnic tables (up from 4 a decade ago), well-defined tent-pads with crushed shale surfaces, running water from a tap (though it must still be treated), and a grey-water disposal pit. There are a dozen metal food lockers by the shelter and more at other points around the campground, plus there are a few poles for hanging food bags/backpacks. Some sites are better placed than others, but they’re well dispersed so it’s rare you’d be camping too close to a stranger. The campground has multiple outhouses which are kept supplied with TP.

The Mount Assiniboine lodge has a daily “hiker tea” between 4 and 5 pm where you can buy refreshments and cake. The beer has improved since our last visit: it’s currently from Mount Begbie brewing in Revelstoke (it used to be Big Rock). Highly recommended (bring cash): sitting on the patio of the lodge looking out to the mountains while drinking a cold beer in the afternoon sun was a fine way to spend an hour.

Note that all camping must be reserved in advance, at least during peak season. There is no way to pay for the camping in Banff NP once on the trail, and we didn’t see a ranger at any point. Expect rodents at all campgrounds.

Flowers were pretty much done, though we were surprised at how many were hanging on. Top of the list were the purple asters and yellow arnica which were abundant even though many were fading into a more bedraggled state. Other flowers in bloom included some red paintbrush, strawberry, white and purple clover, penstemon, fleabane (white and yellow), cinquefoil, alpine buttercup, harebells, a few forget-me-nots, and best of all, autumn gentian. Other species recognized included columbine, western meadowrue, western anemone (moptops), cut-leaf anemone, cotton grass. Fluffy willow seeds were common in those patches.

Berries could be found on juniper, cranberry, strawberry, Saskatoon berry, black huckleberry, buffalo berry (soapberry), and stinking currant. Larch, willow, huckleberry, aspen, vine-leaf maple, Saskatoon berry, stinking currant, and cottonwood provided ample fall colour. Fungi were everywhere, of all sizes and all stages from fresh to putrefying. The only ones I recognized were coral fungus and puffball.

Wildlife sightings were not especially common, though we did see something of note every day. The closest we came to seeing a grizzly bear was some paw-prints in the mud and some very fresh scat on the trail – others staying at the campground saw one between Cerulean and Sunburst Lakes, and another in the meadows on the way up to Wonder Pass. We heard elk close by on two nights, coyotes yipping and howling on another. Our closest wildlife encounters were with a male spruce grouse (of which we saw two plus a couple of females) and a group of 10 ptarmigan. Whisky jacks were present at the Magog cook shelter, always looking for crumbs or handouts (please don’t feed them!), Clark’s nutcrackers were spotted most days, and we saw raptors often too, along with ravens and chickadees. To my surprise, there were still swallows flying around near the lodge (I spotted a nest up in the rafters). We also heard nuthatches and kinglets. We had a great dipper sighting at the Marvel Lake campground, watching it hunt for insects and larvae in the creek. We saw and/or heard pikas near most talus slopes and rock piles, many chipmunks, a couple of golden-mantled ground squirrels, a couple of snowshoe hares, and a weasel at the summit of Nub Peak. How cool is that? 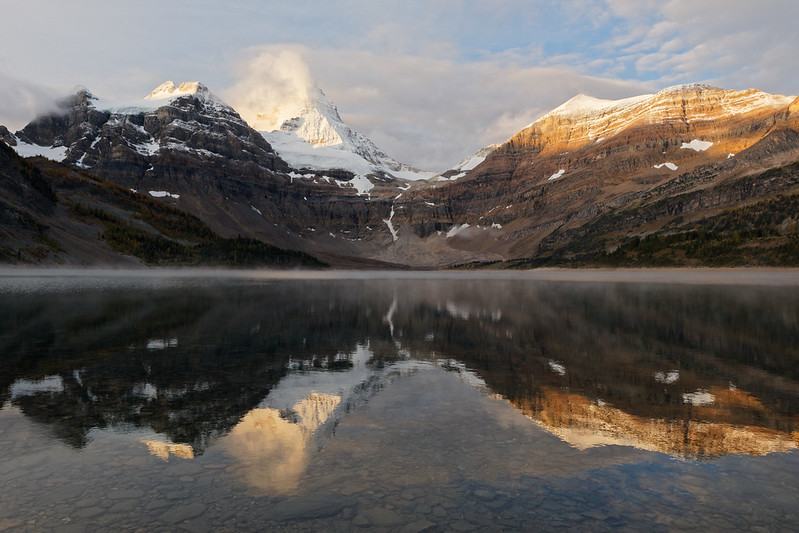 We probably added another few kilometres to that tally just walking back and forth in the various campgrounds! For example, at Marvel Lake, the eating area was nearly 300 m from the camping area, and we walked to and fro multiple times even on a single night.

There's a little patch of chocolate lilies that grows in a very popular park near Vancouver, just far enough away from the beach for most visitors to never know they were there...
Brockton Point is a nice little after-work destination at this time of year. It doesn't usually feel like winter though... It was very cold and the snow was soft - warm layers and snowshoes definitely needed off-trail (even ailing ones like mine, which broke again).
The one and only Mount Assiniboine, looking quite majestic in its snowy coat.
You could say I'm very fawn'd of these lilies... #ErythroniumOregonum #WhiteFawnLily #LighthousePark
Magnificent, majestic Mamquam Mountain
A successful search for blue (king) gentian, and the last blooms of the season.