Opinion
I have to say this trail has got worse over the years and right now I think it’s pretty awful. A steep slog up through roots and rocks, the trail has been braided by the increased foot traffic and has clearly seen little maintenance to try and shore up eroded sections or even keep hikers on track. The destination is as gorgeous as ever, even on a cloudy, misty day. But as the glacier continues to recede, I have to wonder if it’s worth it any more.

Fact
The parking lot has been expanded considerably since we were last here in 2015, and a new logging road extends north over the creek into the forest beyond (the bridge has a weight rating dated 1st October, 2019). The road was slick after recent rain and frost and it had a couple of rough spots, but posed no problems for any of the half-a-dozen cars parked up.

The trail is well signposted off the logging road. Once into the forest, the trail has definitely taken a beating over the past few years with new clear paths worn around muddy sections or areas of roots and rocks. Numerous switchbacks have obvious shortcut trails heading downslope. Many areas are badly eroded with lots of roots to deal with. It’s all a bit of a mess really.

Further up the trail (at about the 2.8 km mark) wet areas were frozen, some solid, others easily crunched through. There was a bit of snow on the boulder field around the 3 km mark, but none on the trail until a kilometre or so later. (We kept on our microspikes on the descent to deal with the icy sections.) Snow depth was anywhere from a covering up to about 20 cm, and was wet and unconsolidated.

In the meadow below the headwall, the trail was in poor condition, following the running creek in some sections, but with some badly eroded banks where hikers have avoided the water. The headwall trail itself was mostly ice or snow covered, for which we were very glad of our microspikes. Even so it was tricky in a couple of spots as the snow was wet and offered little grip, and the ice was solid on the steepest sections on which I didn’t always trust my microspikes. At least the snow and ice covered up the vast majority of the mud. (We saw a few people with poor footwear who were having serious difficulty on the descent.)

The trail to the second camping area at the lakeside was easy to follow, even with a dusting of snow, thanks to the rocks placed either side. Beyond that, it was possible to find a fairly well-trodden route (with occasional cairns) that led to the new glacial meltwater lake at the toe of the Wedgemount Glacier. Speaking of which, the glacier has receded even further since our 2015 visit, probably another 30 m or so. The meltwater lake was frozen over though not enough to bear weight.

It was a good day for wildlife as we saw two mountain goats on the cliffs on the north side of the Wedgemount Creek drainage, a dipper, and a close up encounter with a white-tailed ptarmigan. Very cool! Plus we followed a flock of grey-crowned rosy finches along the side of the lake. In the forest we heard ravens, kinglets, juncoes, chickadees, and Clark’s nutcrackers. Near the cabin, a chipmunk came looking for crumbs, and we heard pikas (and possibly a marmot) among the rocks. Flower season is most definitely over and even the berry bushes have lost all their leaves, though the seed pods of leatherleaf saxifrage have turned a beautiful rusty colour. 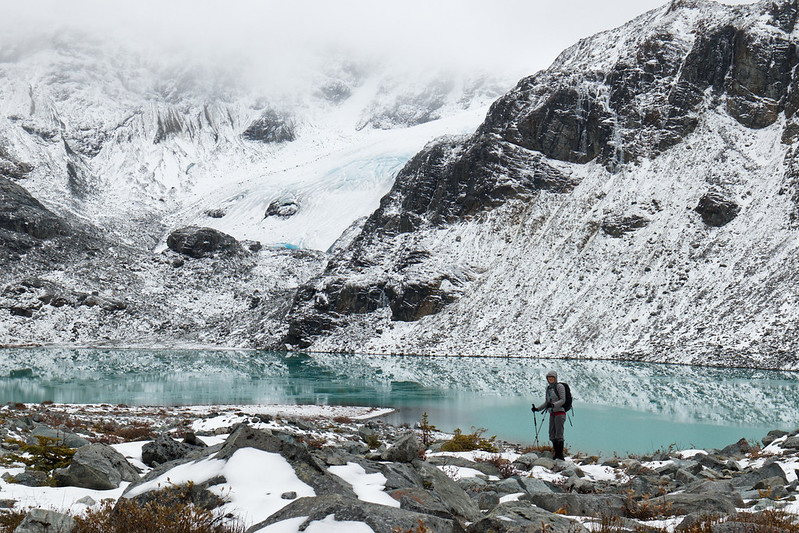