Opinion
A thoroughly enjoyable hike with a nice variety in the trail, albeit tempered a bit by the usual North Shore roots-and-mud show. I really like hiking this as a clockwise loop, ascending Christmas Gully and descending the official trail. Not the best hike for a cloudy day as the views are excellent and worth enjoying on a clear day, so don’t be like us and hike it when there’s no view anyway :-)

Fact
We hiked the trail clockwise from the Cypress Bowl parking lot. The trail through to Strachan Meadows was in great shape and made for very easy hiking. Ascending Christmas Gully was straightforward with a mixture of obvious trail and occasional flagging. There was a small amount of snow/ice near the top of the gully but not enough to merit microspikes. The descent from the south summit is bad in places, sometimes requiring considerable care to step down over wet rocks and/or roots, with mud to add a little extra excitement. As with so many hikes, new trails have been forged around some of these obstacles where unwilling hikers have decided to cut through the bushes instead of tackling the obstacles (none of which are particularly hard, but may need careful hand and foot placement).

The trail through the meadows and from the Hollyburn-Strachan col was muddy, even very muddy. Mostly there were rocks and/or roots to keep feet out of the worst of it but sometimes there was no option but to march through the middle of the mud, which was never more than ankle-deep and thus fine with boots and gaiters. (Hint: if you have to avoid the mud, you’re wearing the wrong footwear!) We finished off the loop taking the shortcut trail that splits off the main trail near the massive old yellow cedar down to the Baden-Powell trail. The turnoff is not marked and there are no trail markers along the way but the route is clear enough. It too had its fair share of slippery roots and a few fallen trees to get over.

A pack of whisky jacks followed us up the gully to the North Summit, swooping in to steal post-lunch crumbs, but thankfully only made a single attempt to grab anything from our (empty) hands. A raven landed after a time to see if there was anything on offer.

Apart from the whisky jacks and raven, we also saw four eagles circling high and a brief visit from a wren on the summit, heard kinglets, chickadees, juncoes, and Douglas squirrels. No flowers, and much of the fall colour has faded but there were still a few splashes of red and orange in the meadows.

No views to speak of today though we did see the very briefest glimpse of a Brocken spectre when the sun shone for a moment. We did get a view of something I wish I hadn’t seen, namely the worst Leave No Trace fail I’ve ever seen. I have no words… Cypress Lodge was closed so the only washrooms were back in the old day lodge. 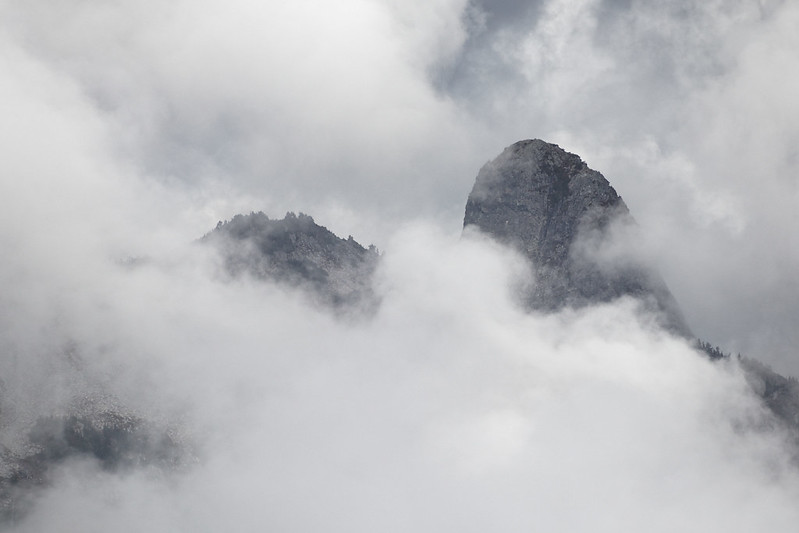