Opinion
A decent leg-stretcher for a dull or rainy day, especially at this time of year when the vine maples stand out as bright yellow beacons in the forest. It’s still very muddy and slippery in places, and the walk back along the creek gets a bit tedious, but the greenery is always a welcome sight during the darker months.

Fact
We hiked the loop anti-clockwise, my preferred direction as it means an easy return walk alongside the creek. The trail in the lower section of the loop has seen considerable upgrades since I last hiked it, with a new trail-bed of firm gravel, and stepping-stone boulders for crossing small creeks. Much easier to hike than the roots and mud of old! The trail up to the boulders has seen similar upgrades and is no longer a trail-hunt over the wet forest floor.

The upper section of the trail to the Third Debris Chute was still rooty and muddy, and, of course, slippery. A couple of open creeks were running across the trail after the recent (and ongoing!) rain, easily deep enough to submerge feet so boots were very handy. Watch for the boardwalk and bridges in the wet: they get very slippery!

The trail back alongside the creek had its usual muddy spots but is otherwise easy hiking. The outhouses at the trailhead were stocked with TP and sanitizer.

Lots of fungi out in the forest including fly agaric, white-crested coral, smoky-gilled woodlover, golden jelly cones, and small staghorn jelly fungus. There were others that I’ve not yet been able to identify too. The leaves of the vine maples and big-leaf maples were turning, often a bright yellow. Cottonwoods and birches were also showing some colour.

Wildlife sightings were limited to a few Douglas squirrels, juncoes, ravens, crows, and Steller’s jays. I also heard a varied thrush, kinglets and chickadees, and possibly a wren.

I hiked this trail as part of a Leave No Trace workshop hosted by Taryn from Happiest Outdoors with the help of Kristine from Hikes Near Vancouver. I highly recommend that everyone who heads into wild areas to learn about the seven principles of Leave No Trace. Read up, take a workshop, and apply to your time in the outdoors. The outdoors (and your fellow hikers) will thank you! 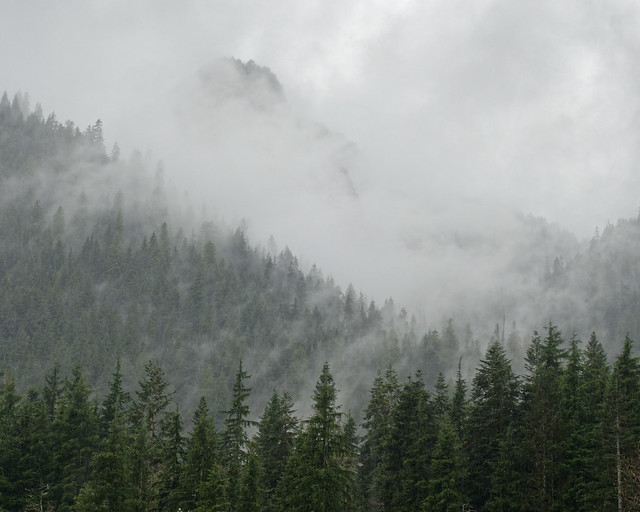 Story
I’ll talk about the workshop in another post, so I’ll just summarize the hike itself here.

For all our hiking experience in Vancouver, you’d think that a little rain wouldn’t stop us. And yet it is a rare rainy day that we venture into the mountains. It’s one thing to have to deal with rain while out on a backpacking trip, but it’s another to look beyond the weather on a morning and venture out into the world. It helps to have an alternative reason for getting out, such as a commitment with friends, or – as in this case – a workshop to attend.

Driving across the Second Narrows bridge towards the North Shore, I could see the three summits of Mount Seymour in their fresh coat of snow, clouds drifting around the nearer summits, and mist hanging in the treetops in Lynn Valley. And even better, it wasn’t raining. I pulled into the parking lot and laced up my boots while allowing the GPS to find out where I was. So much for that: the heavy cloud cover and depth of the valley meant that it took three attempts over the next half an hour to pick up enough satellites to locate me. Lesson there.

I met up with Taryn and Kristine along the rest of the Leave No Trace (LNT) workshop group. We waited awhile for a few others to turn up before starting with our first LNT activity (1: plan ahead and prepare). That done, we set off over a roaring Lynn Creek to begin our hike, turning right once over the bridge and continuing up the road towards Rice Lake. I was immediately struck by the bright yellow of the vine maples that stood out so vividly among the greenery, and couldn’t resist stopping to capture a photo or two. 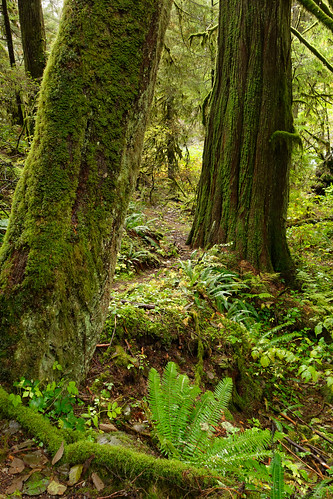 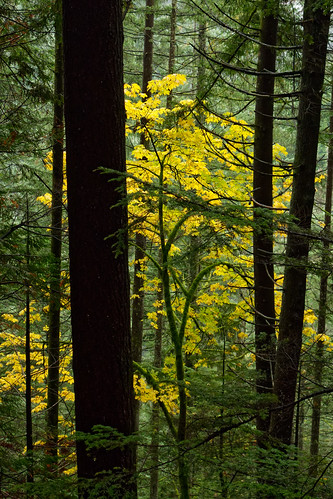 The group halted near the turnoff onto the Lynn Loop trail and we discussed another aspect of LNT (number 7: be considerate of others). From there we hiked steadily uphill, soon levelling off among the tall, ramrod trees of the second-growth forest. The trail had been upgraded since my last visit, and was now a bed of crushed gravel, easy hiking and dry despite the wet day. We hopped over a couple of boulders where a small stream crossed the trail (another upgrade as I’m sure they used to be small bridges or culverts) and continued on. The group began to gel and conversations sprang up, while simultaneously stringing out as people settled into their own pace. The hiking was easy and relaxing, and I naturally found myself sweeping the rear of the group to make sure that no one was being left behind, content to walk in silence and take in my surroundings.

The forest was awash with green, punctuated with the golden glow of yellowing maple leaves. Fungi were all around us, with some impressive specimens of fly agaric, coral fungus, and a small tree festooned with smoky-gilled woodlover. There were more than that, of course, but my knowledge remains limited, and, perhaps surprisingly, I haven’t felt as compelled to photograph fungi as I have flowers. My working hypothesis is that fungi are often in dark forest, where hand-held photography is difficult. Still, I enjoy seeing them (except for when they start to putrefy…).

The group paused once more for another LNT exercise (number 6: respect wildlife) before continuing on through the forest to the turnoff to the boulders, a number of large, uh, boulders that sit alone along the tress, far removed from their origin. (I can’t remember if they’re glacial erratics or if they fell from the cliffs above.) Here we discussed poop and its proper disposal, the group splitting in two and each digging their own cat hole. I think both sides did really well here. As my group searched for a good location, I was surprised to find myself on a faint trail, even passing a greening-cairn at one point. Looking up the slope it appeared to be heading to more boulders, and was no doubt established by climbers looking to perfect their bouldering technique. 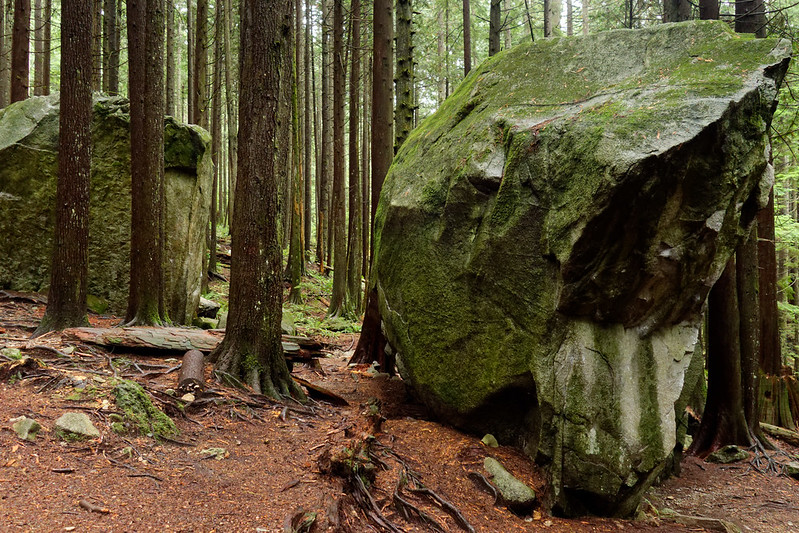 Back on the trail, we made the decision to stick with the high trail and continued on, leaving the upgraded gravel trail behind and returning to the North Shore classic of roots and mud. At least it gave us the opportunity to discuss principle 2, travelling on durable surfaces. Over the years I’ve come to realize that the muddy or wet parts of a trail are often nowhere near as bad as they look and it’s less effort to simply walk through the puddles than to try and pick a dry way around. I’m now a firm advocate of sticking to the trail, and I have to admit it’s become a litmus test for footwear for me: simply that if you need to go around the puddles, you’re wearing the wrong footwear for the conditions.

We picked our way over slippery “death cookies”, those log cross-sections meant to act as stepping stones through muddy and wet sections that are often lethally slick, and down criss-crossed log steps. It wasn’t long before we reached the Third Debris Chute and, after carefully crossing a couple of open creeks running across the trail, walked out of the forest into a small clearing with views up towards the Kennedy Creek watershed between Dam and Goat Mountains. The rain was back with a vengeance, which curtailed our next activity (back to principle 2, this time about camping on durable surfaces). My attention was directed towards the low cloud drifting through the trees on the opposite side of the creek, a scene that really required a tripod, a longer telephoto lens, and an umbrella! I fired off a quick couple of shots anyway before we all ducked into the trees for some lunch. Despite the lack of attention to composition, I quite like the end results.

Taryn and Kristine laid out a tarp and handed out a few extra sit-mats for people. I pulled on my fleece and found a suitable log to sit on to eat my lunch. I was glad of my flask of hot water and sipped that while Kristine and Taryn heated up some water for tea and hot chocolate. We discussed cleaning up after eating (part of number 3), and moved on to camp fires (number 5). I think all of us would have been happy to have a fire to sit around at this point! I was feeling chilly despite my hot drink, though I didn’t exactly help myself as I left my gloves and other warm garments firmly in my pack. 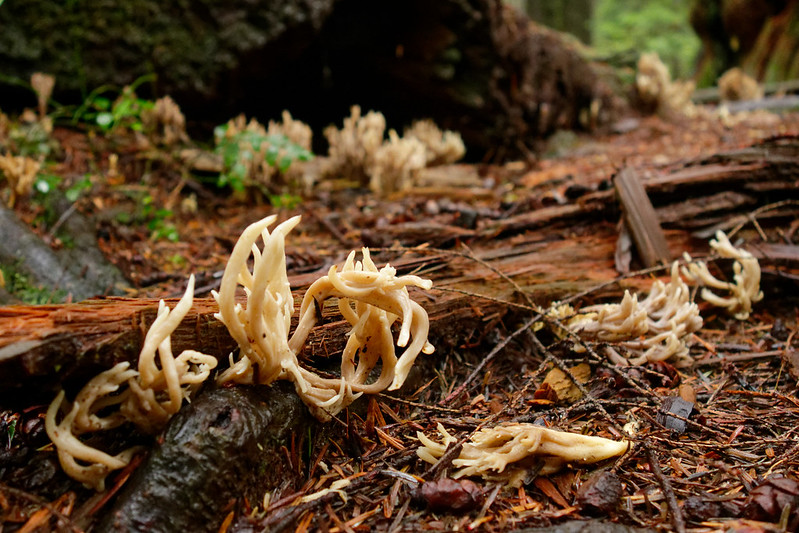 It was soon time to move on, but now we were on the easy home stretch. Our pace quickened in the rain and on the flat trail which helped warm me up once more. Of course there were patches of mud and puddles to walk through, and I noticed a distinct change in approach from the others, with more of them now willing to just walk through the middle of a muddy section. I’d call that progress! The creek was roaring, sometimes too loud for conversation as the trail came alongside.

We paused again for another quick discussion, this time for principle number 4, leave what you find. We had stopped next to an old logging cable and while it may have been historical trash (rather than artefact), the principle remains the same: leave it there. Take a photograph and move on. And so we moved on (and I don’t remember anyone taking a photograph!).

I always get a little bored and impatient on this section of the trail, but I passed the time chatting to a few people, comparing notes on a few hikes and – naturally – going over some of the finer points of LNT. We stopped again to hear about ways to approach others whose actions indicate that may not be aware of LNT, before moving on to our final activity: playing the decomposition timeline game, a series of flash cards with commonly discarded items and how long each takes to break down in a “typical” environment. The aim is to match up the times with the objects. Let’s just say it’s harder than it looks and it made me realize I didn’t have a good feel for those lengths of time.

After one final stop to discuss LNT and social media, we pounded out the last few hundred metres in the rain, congregating once again near the trailhead sign. It was time to thank both Taryn and Kristine for putting on the workshop, which I really enjoyed, and we all dispersed back to our cars. I stopped briefly for a much-needed afternoon coffee, cranked up the heat in the car, and drove home for a hot shower.