Let’s get this out of the way first. Did I find my ultimate glacier lily patch this year? No, I didn’t; that is going to have to wait for another year. But did I find glacier lilies? Oh, you bet, and on a couple of hikes where I wasn’t expecting to see them too.

The quest began on the first day of June with a return trip to Elk Mountain and its conjoined neighbour, Mount Thurston. I first discovered glacier lilies on Elk back in 2011 and more recently on Thurston in 2016, both times early in the season. Elk-Thurston is an easy destination to reach, as well as being a reliable place for early wildflower displays. The glacier lily displays aren’t spectacular – that on Elk being limited to a tiny patch which blooms early, just off the trail beyond the paraglider launch, and a sparsely-populated slope just before the summit of Thurston, as well as a small garden of scattered lilies on the viewless summit itself. But while they may not bloom en masse, there’s really no feeling like seeing those first cheery yellow flowers to lift my spirits with the promise of the hiking season and wildflowers to come. 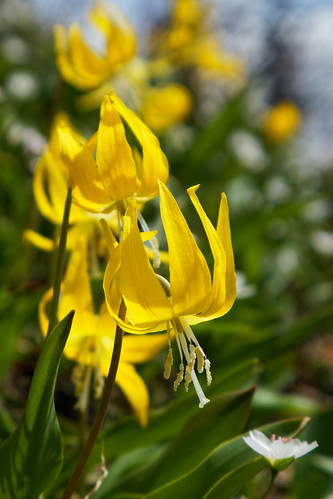 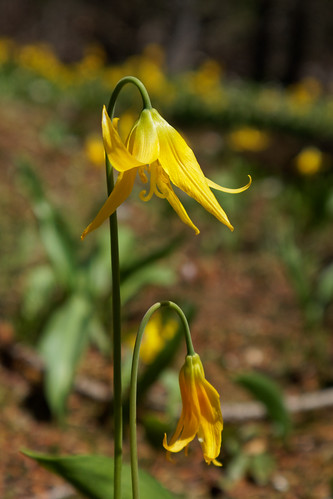 With an easy sighting in the bag, it was time to pick somewhere new for the next stage of my quest. The description of the hike to Goat Mountain (in Washington, not behind Grouse Mountain) in our hike book “From here to WOW: North Cascades” by my favourite guide book authors Kathy and Craig Copeland was enticing enough for me to suggest it as our next destination. Of course, it was meant to be a great hike even without any flower sightings, but with the promise of early snow melt on south-facing slopes I could not resist. And sure enough we were treated to one particularly lovely meadow brimming with glacier lilies with many more dispersed flowers beyond that. Further up the mountain we saw a couple of patches that had already passed their peak, but there were still plenty of emerging flowers for me to stop, stoop, and photograph. This hike was especially good for seeing so many flowers in bud. We’re off to a good start! 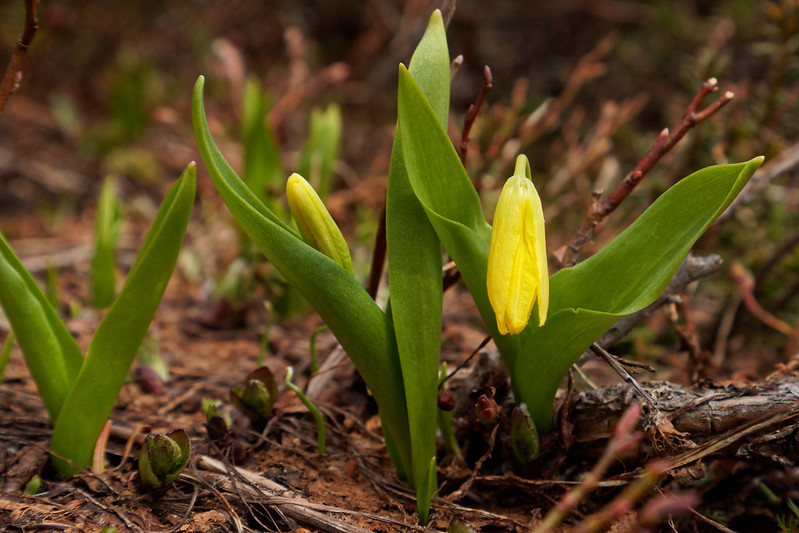 Having now clued in to the Mount Baker area as a good place for lily-spotting, we returned the following week to hike up to Church Mountain. Never mind that the hike itself was stunning, with an incredible view at the top, it was also an excellent place for glacier lilies with some fine expanses of yellow and green. The downside was that the best displays were off the trail and, with it being a popular destination, I did not want to set a bad example by traipsing off into the meadows. I did what I could, staying close to the trail. 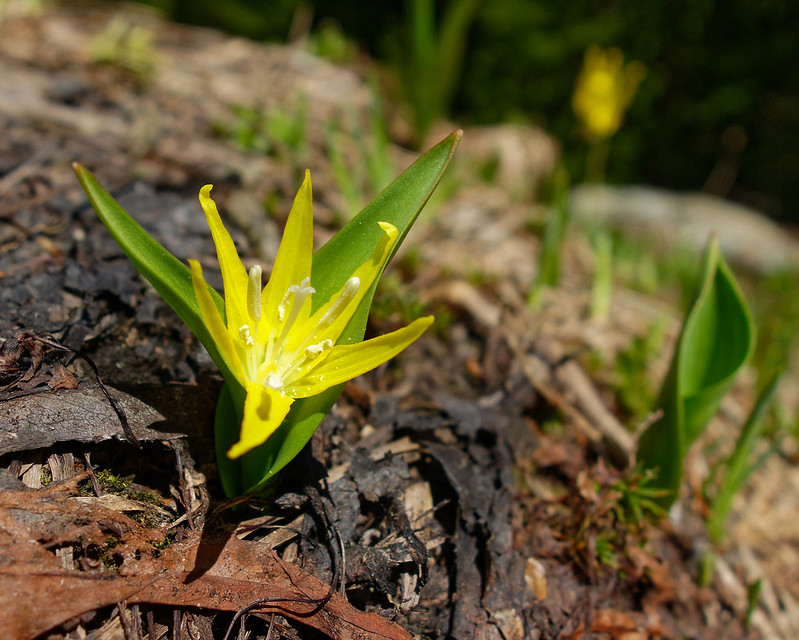 Our next destination was meant to be Downton Creek, but a fallen tree had us quickly opting for a Plan B destination of Blowdown Pass, an area that holds a special place in my heart for glacier lilies. Perhaps the best display we’ve ever seen was at Blowdown Pass on a visit in 2010. We’ve not been lucky with our timing since then, and again on this visit, we had missed the peak bloom by a week or two, the meadows now filling in with the next wave of flowers. But of course there were still plenty of glacier lilies dotted about along the trail, especially in shaded areas, and I was able to track down and photograph most of them. 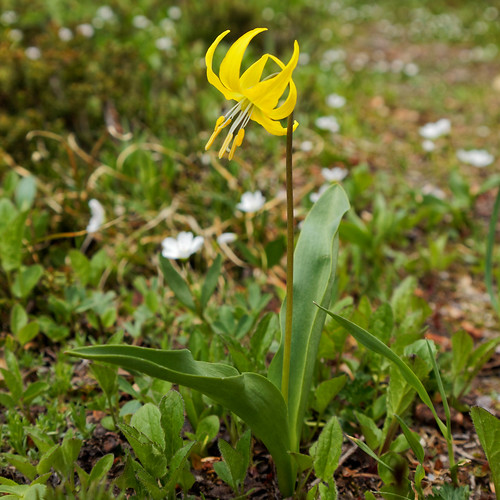 So, not a bad start! Four weekend hikes, and four successful glacier lily sightings. How long could I make it last? It was still not yet July so I had fairly high hopes that we’d see more.

Sure enough, the following weekend we walked right past a slope filled with blooming glacier lilies on the way to our campsite at Hanging Lake, near Whistler. That was surprise number one. The second surprise was another meadow within the Rainbow Lake watershed that we passed on our way towards Rainbow Mountain. In both cases I waited until the light was more favourable to capture the flowers in sunshine (although I was a little late on one of them as the sun was close to the top of the slope, which made photography very difficult), and I spent some time trying to get good angles and perspectives. Despite that, I don’t think I succeeded; one of the frustrations with stalking glacier lilies is that they can be remarkably difficult to photograph effectively. The solution is to take more time, which is tricky to reconcile with hiking, the primary reason we’re out there. 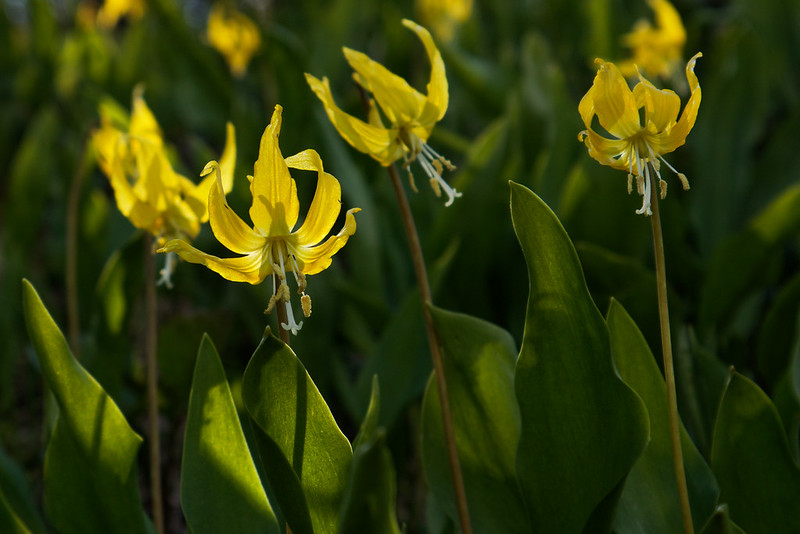 After the glorious month of June, July started with rain, limiting our options for hikes to those closer to home. After two weeks of no sightings I was beginning to wonder if my glacier lily season was already over. While I knew the main display was finished, I thought that a return to Mount Baker might provide an opportunity to spot some more, and if not then at least we’ll have visited somewhere new, with plenty of other flowers and spectacular views. Well, of course I found some stragglers freshly blooming in a few isolated spots without even trying. I had to work a bit harder to find another patch of fresh flowers, which wasn’t really worth the effort, but that didn’t matter as it was a beautiful sunny morning to explore and ramble. 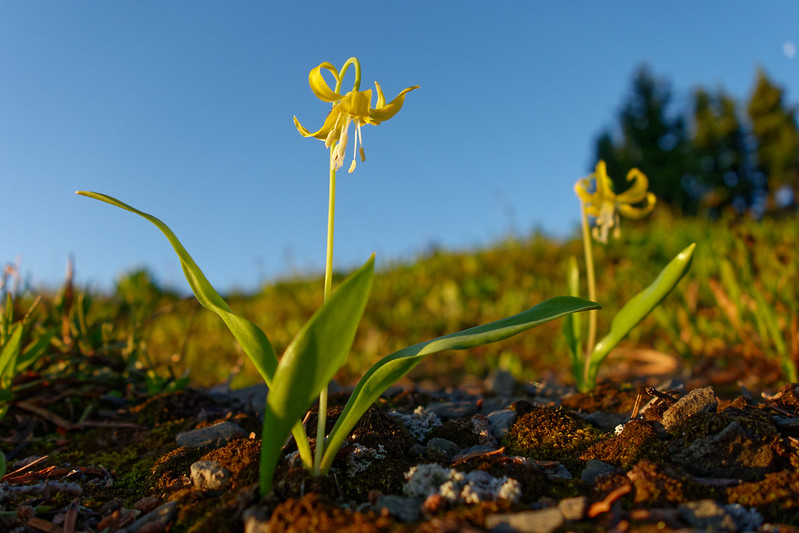 I truly thought that would be the last chance; there would be no more glacier lily sightings this year. The following week we hiked the Skywalk North trail near Whistler and saw many flowers along the way. Just not glacier lilies. I began to make peace with the notion that the bloom was done. That is, until we reached the bridge over Nineteen Mile Creek below Iceberg Lake when a familiar shade of yellow caught my eye… I squinted and convinced myself that the flowers on the bank of the creek were indeed glacier lilies, but resigned myself to not capturing any of them as, once again, they were too far off the trail. At that moment Maria pointed down at my feet (or near my feet) to a small group of barely half-a-dozen nodding yellow flowers within easy reach of my camera. Enraptured, I knelt down (to the bemusement of passing hikers) and spent several minutes doing my best to capture these very last cheerful flowers. My day was complete! 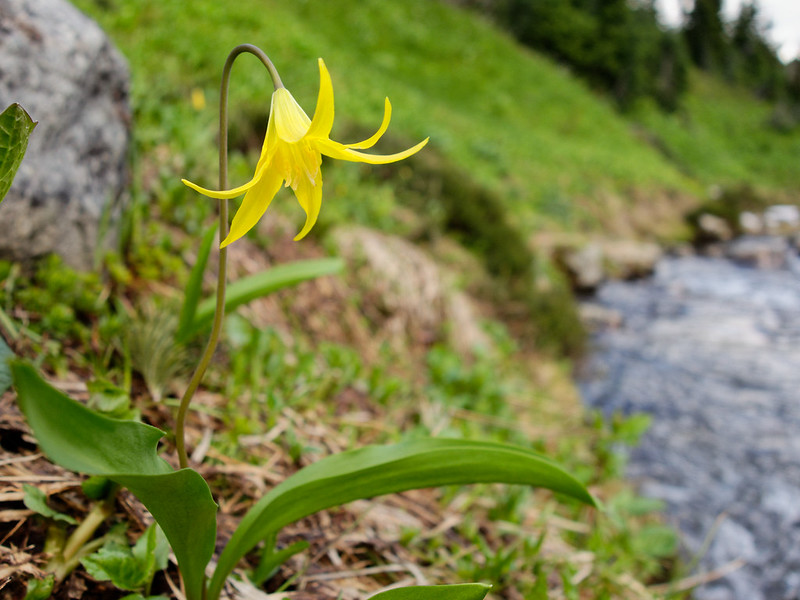 And yes, that was the last we saw. Since then, all we’ve seen are the seed pods, and so I’ll have to wait until next year to see those sunny yellow flowers again. But what a year! We saw them on seven hikes over the course of nine weekends, a record that I think will be very hard to beat without serious planning. And you know, maybe I don’t need to see so many next year? Perhaps my glacier lily appetite is sated for now, and I can just plans hikes in the same way as normal people.

But no promises… Right?