Opinion
While not worth the price of admission to Grouse on its own, Thunderbird Ridge is a superb destination with a great viewpoint at the end of the ridge. Buy an annual pass, and then hike all of the Grouse peaks over the summer, especially this one which can be combined with Dam and Little Goat (as we did) to make a nice little circuit.

Fact
The most important point to realize right now is that all of the signposts have been removed for the winter. Every single one! If you don’t have a map, or don’t know where you’re going, then I would not recommend this hike (or any of the other hikes on Grouse right now). To our surprise, there were no signs warning of the winter backcountry closure either.

We hiked up to Dam Mountain first, then over Little Goat before heading out onto Thunderbird Ridge itself. While the signposts have been removed, the basket cairns that they’re usually attached to can still be used to at least call attention to important intersections. It’s also worth keeping an eye open for flagging tape and/or occasional yellow markers nailed to trees.

The trail was in, well, hikable shape I guess. I mean, it was mostly roots, rocks, and mud (with some ice thrown in for good measure) and cannot be described as fun or relaxing hiking. We took the first available option to head towards Dam and regretted it: it follows the pipeline and was steep and mucky. It was also sufficiently overgrown in places to have us wondering if we were on the right trail at all. Sometimes it’s hard to tell, especially in areas that have seen a lot of visitors over the years. Then we followed the loop trail out to the west, which was great. The descent off the north side of Dam was steep and slippery in places, with a few badly eroded spots.

The route up to Little Goat clearly doesn’t see much traffic as it was still a fairly narrow footbed. However, the ascent was very slick and steep. Finding the summit itself required following a faint trail through some mountain hemlock. (It’s worth it.) The summit has a nice view north towards Sky Pilot and Garibaldi. Conversely, the descent off Goat was trivial, although there was some ice near where it rejoined the main “alpine” trail (as usually labelled).

The trail onto Thunderbird Ridge dropped down through mud and ice which was easy to slip on. After that it was mostly fine although there were more icy patches on this part of the trail than any other. The views at the end of the ridge were superb! The route back past the flank of Dam Mountain (i.e. the aforementioned Alpine Trail) was an exercise in patience dealing with the mud, roots, and rocks. Not exactly fun, but at least peaceful.

Only 3 other groups filled out the backcountry registration slip today. I know there were more than that up there ;-) Parking was $4 for the day. 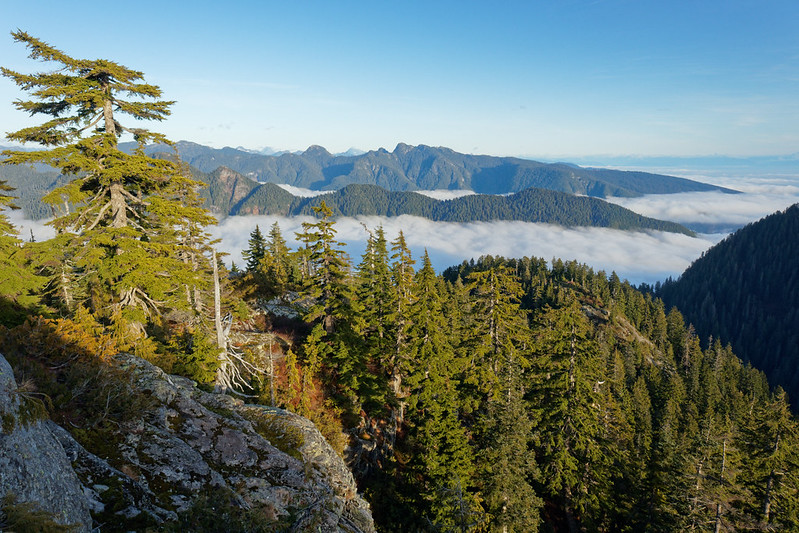