Opinion
A long but rewarding hike on a great trail, with the added benefit of being so much quieter in the winter. Not my favourite style of hike as all the payoff is at the end, but it’s such an easy trail to hike that I don’t mind as much, plus I know it well enough to pace myself through the tedious switchbacks. The downside to it being easy is that, even in winter, it attracts its fair share of unprepared hikers.

Fact
The parking arrangements have changed significantly since our last visit in 2015. The parking lot has been expanded and about a kilometre of the south side of the access road has been widened and designated as parking. A tree was partially blocking the road about half a kilometre from the highway, though it was easy to drive around.

The trail was in great condition and snow-free until the last half-kilometre or so before the lake, save for a dusting in a few gaps in the tree canopy. Snow depth reached at most 10-15 cm in places. A tree had fallen across the trail at about the 1.75 km mark (possibly during the most recent windstorm), completely covering it. We had to pick our way through the branches, which, thankfully, was not too difficult.

There were a few significant patches of ice, and many parts of the trail had ice covered by a thin coating of dirt which made them hard to spot. We didn’t use microspikes on the ascent until we had to cross Parnassus Creek which was completely frozen over. Beyond that they were invaluable, especially near the lake as many boulders had a coating of ice. We kept them on for the descent until about the 4 km marker. They probably weren’t entirely necessary, and most people weren’t wearing them but I felt more comfortable with them on. We noted that bare ice looked black at night so was quite easy to spot with our headlamps.

Garibaldi Lake was not frozen. Thin ice had formed in sheltered bays but did not look thick enough to support any significant weight. Lesser Garibaldi Lake was very low where Taylor Creek flows into it and was mostly frozen otherwise. Rubble Creek was still roaring as it entered that lake. Barrier Lake looked to be completely frozen, and some people had ventured onto the ice at its western end. I don’t know if it was yet sufficiently frozen to cross safely but there doesn’t seem to be any point trying at the moment while the trail is snow-free.

At the campground, all of the composting outhouses were closed and boarded or locked, so we had to find one of the remaining pit toilets by exploration. It would be good if the open outhouses were marked in some way as not everyone visiting is likely to be as diligent. The upgrades to the campground look welcome.

Obviously no flowers to report but it was lovely to see the green leaves of wintergreen and rattlesnake plantain, as well as carpets of luxuriant moss and green lichens in the trees. Wildlife was limited to begging whisky jacks at the Barrier, plus we heard kinglets in the trees as well as what I think was a sapsucker, and spotted a speeding vole that darted across the trail in front of us. Snowshoe hare tracks dotted the snow near the shelter nearest the Battleship Islands. 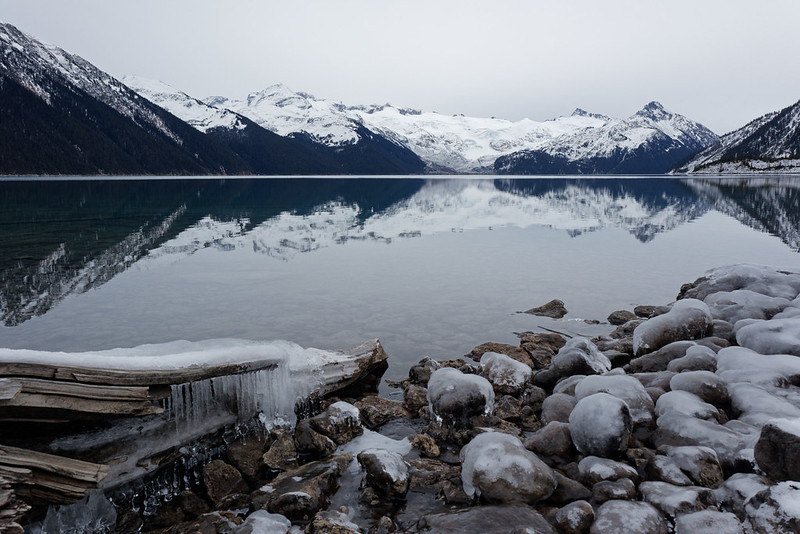