Opinion
Long but not difficult, Elfin Lakes is a much better hike in the winter since the tedious rocks and gravel are covered, plus it’s a superb way to get some alpine sunshine and epic views on those shorter days.

Fact
The road to the parking lot had quite a few potholes but none were hard to deal with. There was a little surface ice from the overnight frost but thankfully not enough to make the road slippery. We were able to drive to the parking lot with no issues; there was no snow or ice. While rough, the last kilometre or two was mostly in decent shape and high clearance wasn’t necessary. Remarkably, when we arrived, there were only two other cars there. We’ve never seen it so empty!

We were able to follow the summer trail all the way to Elfin Lakes. The winter route was not yet marked. However, watch for places where the trail splits: it’s easy to end up traversing a steep slope high above the trail. (Ask me how I know this…!) Snow began at about the 3-4 km mark, and was icy and hard packed. Microspikes were handy though not entirely necessary, except for the ice on the road up to Red Heather, which began at about the 2-km mark. Snowshoes were not needed, and even venturing off the trail I found the snow to be mostly supportive, although when I did break through, I sank up above my knees, putting its depth at about 50 cm.

All the outhouses had TP; the outhouse at the trailhead had sanitizer as well. Watch for ice on the steps of the outhouse in Red Heather Meadows. Guys, if you have to pee along the way, walk off the trail a bit will you? Thank you…

Wildlife was limited to some chickadees, a (downy or hairy) woodpecker, and two groups of whisky jacks: one at Red Heather, the other at Elfin Lakes. The ones at the lakes were extremely bold – one perched on my phone while I was taking a photo, while another landed on my head and was quite happy to sit there for a moment before I shook it off. Dare I say it again? Don’t feed the wildlife!! 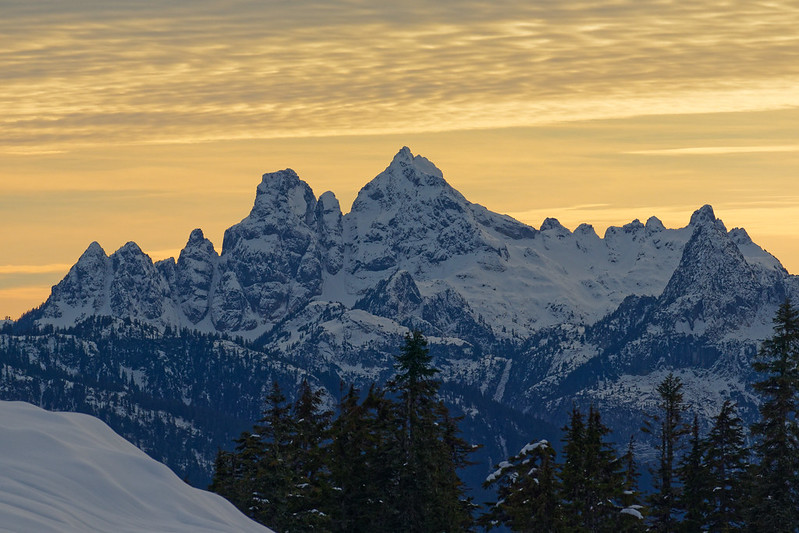