Opinion
A stunning area of endless views and superb ridge walking, this area is simply sublime hiking terrain. And remarkably easy to reach, provided the road is open. July is a great time to visit with all the wildflowers in bloom, but I imagine autumn is at least as good.

Fact
Canyon Creek Road was open to the trailhead, and despite what I’d read in some of the WTA reports, was actually in pretty good shape (at least by BC forest road standards). It was paved for the first 8 km, then mostly paved for the next 4 or 5 until it crossed Canyon Creek, after which it became gravel. Sure, there were lots of potholes, some of which were quite deep requiring abundant caution, but other than that the road was great. It was narrow in places, although never so much that two vehicles couldn’t pass. The paved section even had pullouts. The road was never steep and even though the official advice is for high clearance beyond the 14 km mark, it wasn’t really necessary. Just exercise caution and go slow through the potholes and any vehicle could make it. The trailhead had room for about a dozen cars, bear-proof garbage/recycling bins, and an outhouse that may or may not have TP.

The trail was clear and easy to follow to the pass. The grade was gentle, as you might expect from Washington trails, with only a few small mud patches to deal with. At the pass, the trail split three ways: south down to the Mount Baker Highway, and east and west along the ridge. The trail in the western direction ended at a steep and exposed rock bluff that could be scrambled, though I didn’t feel up to it. Heading east along the High Divide trail, we followed it up over Excelsior Peak and as far as Peak 5930 (as marked by CalTopo) before returning to the pass. The trail was a lovely single track route that often traversed extremely steep meadows – I would not want to start sliding down any of those!

It wasn’t hard to find camping areas, but finding good camping areas wasn’t as easy as it looked owing to the great expanse of meadows and sloping terrain. That didn’t stop some folks though (we saw a group camping among the flowers on Peak 5930). However, it seemed that most groups were only spending a single night so perhaps the damage won’t be as bad as it could be. We camped (alone) in open grassy meadows about 500 m before the pass. The creek crossed by the trail a few hundred metres before that was a good water source. Beyond the pass we could hear another creek running well though we didn’t investigate. There were enough good trees for hanging an Ursack.

The trail was quite popular with a good number of day hikers (including families) and at least a dozen tents spread out over the area. Most people seemed to prefer to camp nearer the pass and thus further from water. I guess that doesn’t bother some people? Personally I don’t like to be too far away. On our way out we met two people on horses (or were they mules?). Remember to stand downslope of horses to avoid spooking them.

In terms of wildlife, not much to report apart from a few whistling marmots and some goat tracks. The mosquitoes weren’t too bad but were definitely a nuisance when the breeze dropped. Varied and hermit thrushes kept us company, along with Oregon juncoes and a few other small birds. 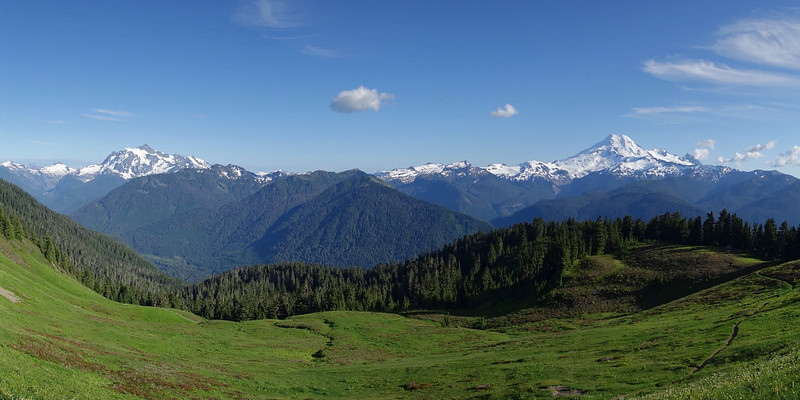