Opinion
An excellent scenic hike with great (albeit distant) views of familiar peaks that requires relatively little effort – except when breaking trail in fresh snow. The downside is that it’s expensive. Still, it’s well worth doing as part of a summer of hiking the Whistler and Blackcomb trails to make full use of a pass.

Fact
There are two ways to get to the Blackcomb trail network (three if you count hiking up the Blackcomb Burn): Whistler Gondola then Peak 2 Peak, or the new Blackcomb Gondola. Since the Whistler Gondola was closed, we had no choice but to take the Blackcomb ride. We parked in Lot 3 and paid $10 for the day (no free parking at this time of year!); the cheaper ($5) Lots 4 and 5 were full.

Snow began at about the midway station (1200 m) and was about 30 cm deep at the top where it was wind-scoured, compacted, and quite icy. (We were glad to get onto the trails proper!) We had microspikes but not snowshoes – we might have gone further if we had brought snowshoes as breaking trail without them was hard, even in the fresh unconsolidated powder. Boulder fields were potentially treacherous but thankfully we were able to pick our way through safely. Most other hikers had no traction aids, and many visitors had only street footwear which meant they slid along the trails (making it icy for everyone else, of course…).

We followed the (lower) Alpine Trail to meet up with the Overlord Trail, then picked up the Lakeside Loop before descending to meet Overlord again. The trails were well marked and the first sections had been mostly hike on so the routes were obvious. However, at Blackcomb Lake we had to guesstimate where the trail descended to meet the Overlord Trail. The broken trail ended at the junction of the Overlord Trail and Decker Loop. We continued breaking trail along Overlord, which was much easier to follow than we expected thanks to a combination of trail markers and a well-established footbed that was still evident even under a foot of snow. We stopped at large boulder with a nice view towards Overlord Mountain and friends, still about half a kilometre short of Decker Tarn itself, before turning retracing our steps, taking the Overlord trail all the way back to the Alpine Loop, whereupon we returned to the gondola via the upper section.

Wildlife: not much apart from a chipmunk in the snow, snowshoe hare tracks on the trail, and the briefest glimpse of a bear as we ascended in the gondola. 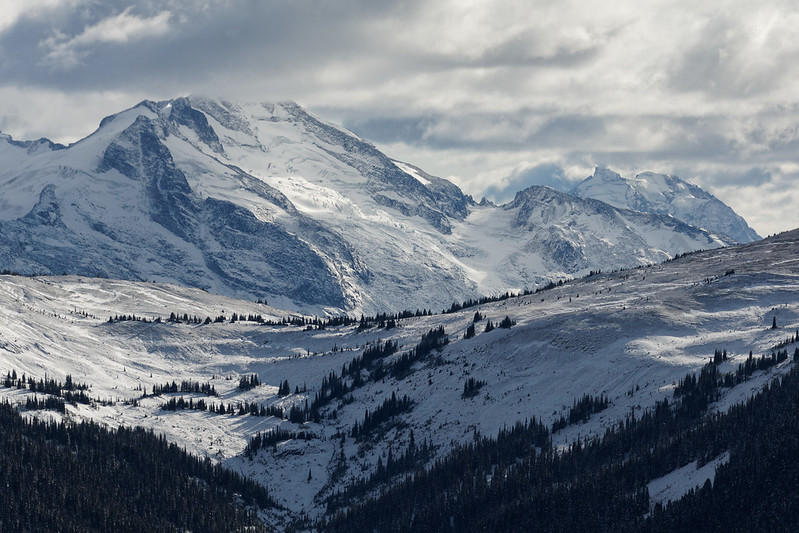