Opinion
Tetrahedron Provincial Park is definitely an underrated destination, and trekking through to McNair Cabin is a great way to find some peace and quiet. The route is very well marked making even winter travel quite straightforward, and was a delightful mix of open subalpine forest, meadows, and lakes. Even the logging road is pleasant snowshoeing. Just be aware that venturing off trail leads to avalanche terrain so be prepared for that. And be prepared to break trail beyond the Mount Steele junction.

We parked at the lower parking lot at the end of the Gray Creek FSR. Snow began around the 6 km mark and we put on tyre chains at about 8 km. They were definitely needed in both directions! Descending was easier in some ways as the additional vehicle traffic had flattened out the snow beyond the pair of ruts that we followed on the way in. Tip for driving up snowy logging roads: please don’t just stick to existing ruts, try to drive along the edges to even out the snow to make travel easier for later visitors.

The trail was well signposted and marked with orange and yellow-green diamonds all the way through to McNair Cabin. Triangle markers indicated changes in direction for additional help where necessary. There were two points where we followed our noses as the markers were not visible, but we soon found them again. There were also old ski tracks that we could follow for most of the way.

We crossed Edwards and part of Chapman Lakes, and there were no indications that the ice was unsafe. However, other, smaller, lakes had some open water. Crossing Steele Creek beyond Edwards Cabin was on a sloping snow-covered log that required a bit of care but was otherwise fine. The bridge across Chapman Creek was in acceptable condition though getting off/on the bridge on the south side of the creek was a bit of a challenge owing to the high snow step!

On our middle day we explored in the direction of a small peak between Panther and Tetrahedron. However, finding safe slopes to traverse and climb was tricky at times and we turned back before we could get ourselves into trouble. The consolation was lots of wide open meadows through which to meander. I wanted to venture to the outlet of McNair Lake but ran out of time, and it looks like the route crosses the base of two avalanche slopes.

McNair Cabin was clean and really well positioned at a shallow pass between the Chapman and McNair creek drainages, although it only got sun during the middle part of the day. Remember your hut booties! We had to melt snow for all of our water as open water was too far away. The stove worked better with the door open. Be sure to leave it as clean as you found it and to restock the wood box and kindling before you leave. And don’t forget to pay! $15 a night is great value. There was evidence of mice in the cabin but we didn’t hear any while we were there. The outhouse was clean and un-smelly (at this time of year). BYOTP. A designated pee-tree was just outside the cabin. Our group of four had the cabin to ourselves, which was bliss.

Wildlife: we saw eagles and ravens, we were pestered by whisky jacks at Edwards Cabin, spotted a red-breasted sapsucker, and (the highlight) a ptarmigan in winter plumage! In addition we saw plenty of tracks in the snow from snowshoe hares and other mammals, including something small that left a tail trail.

Distance: 28 km
Elevation gain: 990 m
Time: 6 hours in to cabin, 3 hours exploring on day 2, 5 hours back to trailhead, including 45 min lunch breaks in each direction. 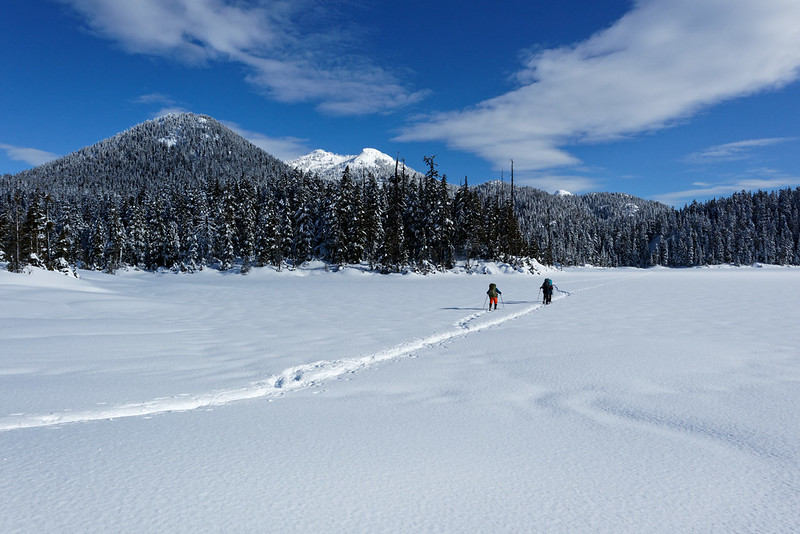