Opinion
A pleasant snowshoe through old-growth, mid-elevation forest that takes in a couple of slender lakes and Alexander Falls. It won’t win any awards for excitement, and there is a per-person fee which may or may not feel like good value for money. On the plus side, it’s peaceful and easy going, and provides a moderate workout for those days when you just need some fresh air and snowy trees.

Fact
Parking is at the Callaghan Country cross-country ski area just across the bridge over Madeley Creek. A day ticket costs about $17 per person.

We followed the Finger Lakes trail out, joining up with “Real Life” at the half-way point which we followed back before taking the Alexander Falls loop. The trail was well established, forming a deep trench in the snow at times. Markers on the trees were usually frequent enough to stay on track, supplemented with occasional flagging tape. The route is not marked on any map, such as OpenStreetMap or CalTopo, so the markers are definitely needed. The descent on Real Life is shared with cross-country skiers so try to avoid their tracks. Signs request that snowshoers stay on the right-hand (south) side of the trail (which is an old logging road). Watch out for occasional snowmobile traffic from Journeyman Lodge.

The steep descent to Alexander Falls was icy and required care but the rest of the route was fine. The falls and river were not frozen, but there was a good, safe open area from which to admire the falls.

The only wildlife were some chickadees and/or kinglets in the trees, with plenty of tracks from an undetermined animal, possibly a weasel. 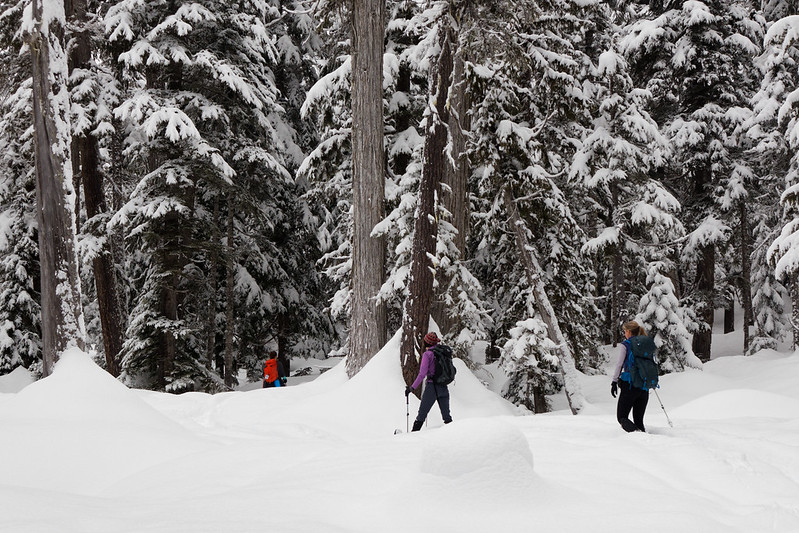 Story
Our friends Brenda and Colleen invited us out for a day’s snowshoeing. “Where to?” we asked. A: “The Finger Lakes Trail”. Wait – aren’t the Finger Lakes in upstate New York? Thankfully not the ones on this trail! Spared the prospect of a cross-country drive we readily agreed and met up early Saturday morning ready for the journey up to the Callaghan Valley cross-country skiing area. The weather was distinctly uninspiring with low clouds and steady rain, but we were trusting in the forecast that promised light snow in Whistler.

The drive was atmospheric with mist hanging in the trees and occasional glimpses of snow coated trees on the slopes of the mountains. As we approached Squamish the Chief was barely visible, its topping of snow glowing through the clouds. The small peak called the Papoose poked above the mist next to the road, looking much more impressive than it usually does! The rest of the drive was uneventful (I noted that the water level in the Cheakamus River was low) and only after turning up the Callaghan Valley road did we encounter slush on the road. Now we were surrounded by snowy slopes and trees that disappeared into the low cloud. We turned onto the bridge over Madeley Creek, paid our trail fees, and parked up.

The chilly air almost had us closing the doors on the world again but we persisted and pulled on our boots, snowshoes, and packs. Maria and I laced up our snowshoes again and we recounted the tale of how our snowshoe bindings gradually failed while snowshoeing last weekend. All set, we trudged off and found the trail, turning left onto the Finger Lakes trail. We bypassed the Express trail down to Alexander Falls, saving it for later, and wandered off into the trees.

The trail was well-trodden, forming a knee-deep canyon of snow in places. It was more or less exactly two snowshoes wide too, which made using poles somewhat problematic as they sunk deep in the soft powder either side of the trail! Speaking of powder, I was in full-on puppy mode just at being so happy to be outside in the snow again, and I took off alongside the trail to yomp through the delightful soft airy snow. It was fantastic! 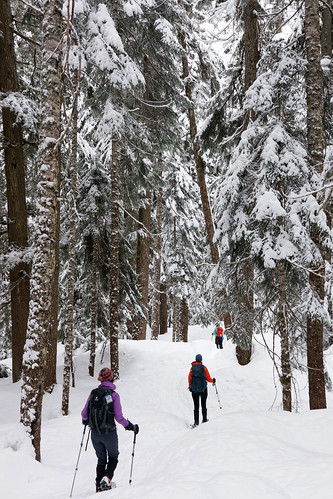 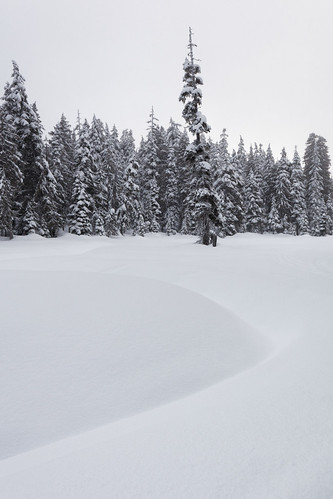 We followed the trail as it meandered this way and that through the wonderful old growth forest, all the while climbing gently. Occasionally the sound of running water greeted our ears and we crossed many small creeks, some festooned with icicles. The terrain levelled off as we reached the first “Finger Lake”, a stream-filled open meadow in summer but a long thin snowy “lake” in the winter. I checked the map on my GPS for other nearby lakes and saw two marked that did indeed look like actual lakes.

Trail markers led us onwards through a mix of open meadow and deep forest and passed the group of snowshoers whose tracks we’d been following. Other tracks included those of one or more small mammals that criss-crossed the trail. We couldn’t tell what made them but we knew it wasn’t a squirrel or a snowshoe hare. My best guess was a weasel of some sort. At one point the tracks even made use of the snowshoe trail for a short distance! An intersection had us pause for a moment as we looked to check which direction was most likely to be correct. Now that we were in the lead we had to choose wisely! We could see flagging along the left fork and opted for that.

It turned out to be correct, and after a short climb it wasn’t too long before we reached the second lake. We stomped out a patch in the snow and pulled out mats to sit on to enjoy a snack break. The light snow of earlier had been replaced by the faintest of snowy drizzle, though that didn’t last long and the sky actually brightened for a time, with the briefest hints of blue sky here and there. 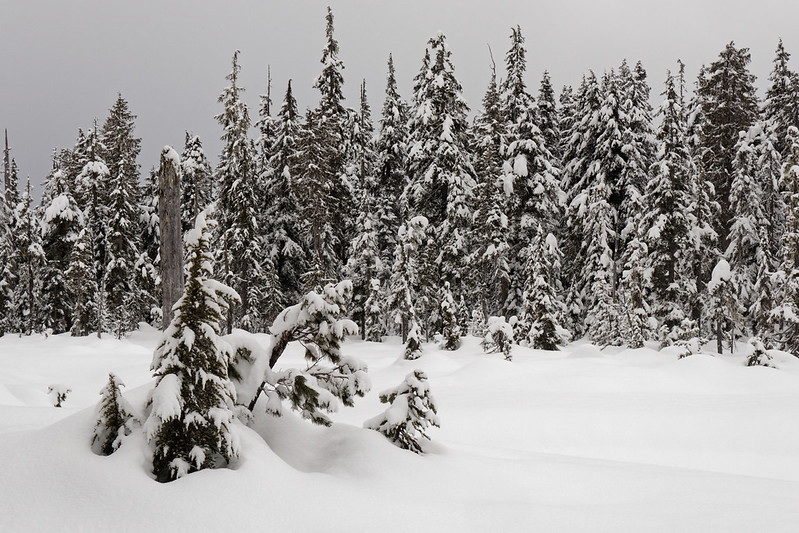 We continued on through the meadows on the edge of the forest, at one point walking a circuitous hairpin bend around a snow-covered log over a creek before beginning to climb again. The forest was silent apart from the swishing of the snow under our feet. Oh, and the occasional cheep of chickadees high in the trees. I couldn’t help but skip off trail to play in the soft powder again. (Can you skip in snowshoes?) It was such fun! I tried recording a couple of video clips to capture just how soft and deep the snow was but it’s surprisingly hard to keep the camera trained on your feet while watching where you’re going!

Alas, the forest trail eventually ran out as we reached the “Real Life” trail, a mixed-use trail shared by cross-country skiers. We kept to the right as instructed and enjoyed an easy walk back down towards the beginning of the trail, sometimes in the mist, sometimes in light snow as the trees shed their loads. A pair of skiers commented on the grins on our faces – I guess we looked a happy bunch! We certainly felt a happy bunch: it had been such a peaceful and relaxing experience. 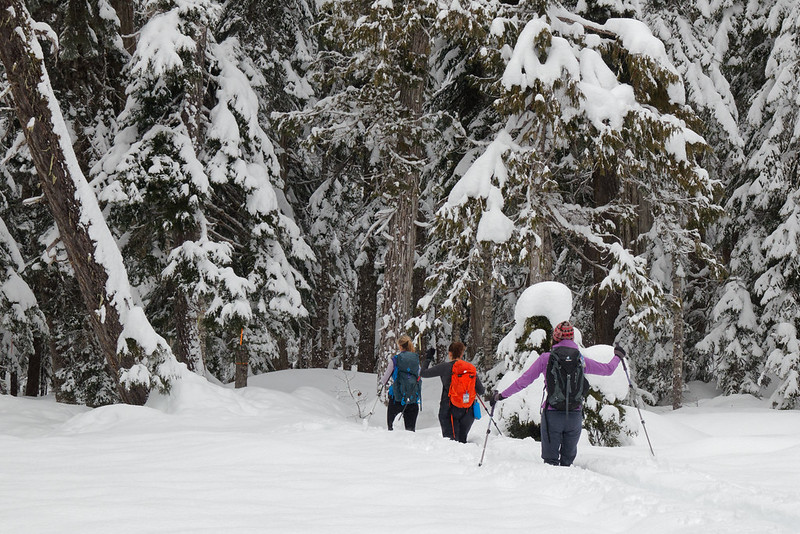 With 4 km to go we stepped up the pace with ease and over the next hour we counted down the kilometre markers back to the beginning. After a time-check and snack, we rejoined the trail to venture down to the base of Alexander Falls. The evidence of more snowshoers was immediately and in some case dishearteningly obvious, the worst being dog poop (bagged and not) and pee in the snow. We walked down on what was now a very firmly packed trail and picked up the side trail down to the falls, passing a number of hikers on their way back up (some enjoying the steep climb less than others!).

After a final steep and slightly icy traverse, we were down at creek level and we walked the last 100 m to the base of the falls. To my surprise, the falls were completely ice-free, apart from a few peripheral icicles. Compared with the bright white snow, the falls looked dull and grey and, to be honest, a little uninspiring! I tried a few shots, including some longer exposures with the help of the polarizer, and with that done there was nothing else to do but retrace our steps back up the slope and to the car. It felt like a masochistic way to end a relaxing hike (especially with all the other snowshoers!) but we powered and/or slogged up the incline and were happy to get back to the car. 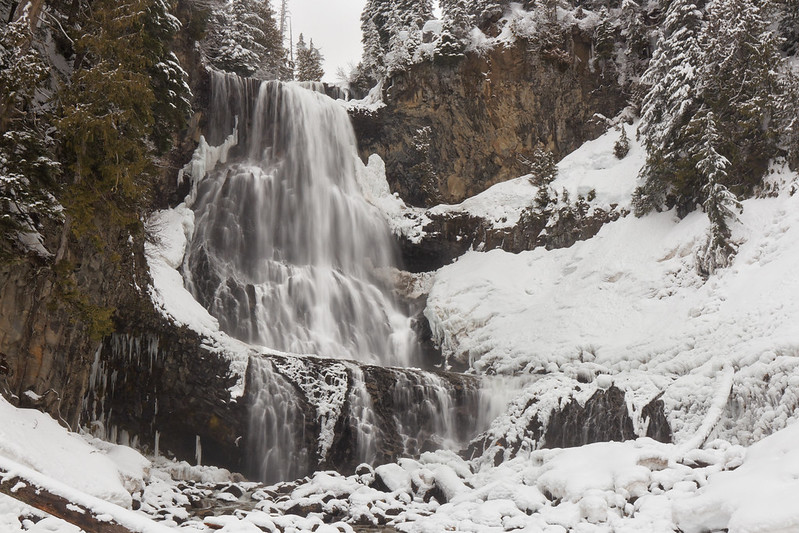 We pulled off our snowshoes, I changed my socks and put on some less sweaty clothes, and we made up a quick lunch of cheese, dried apple, and salt-and-vinegar crisps. Suitably fed, we got back on the road and enjoyed a steady drive home, our eyes adjusting from the white to the intense green by the time we were back in Squamish. The drive back along Howe Sound was even more atmospheric with mist swirling around the island peaks, the intermittent rain unable to dampen our spirits from the wonderful day of wandering.

Some days you just relish being outside, and today was definitely one of those days.