Opinion
Short and steep enough to be a good cardio workout when you want to push it. Always a fun trail and easily broken down into sections. But get there early on a fine holiday weekend!

Fact
A quick report for a quick hike.

Arriving at 9:10 am meant we had no trouble finding parking; unlike the folks who were turning up as we left two hours later many of whom had to park on the Cypress Bowl Road or block the road waiting for a returning snowshoer or skier to leave. Traffic was slow and/or at a standstill trying to get into the downhill ski area, even at 9 am.

Snowshoes were not needed: the snow on the trail was hard-packed and easy to walk on. Microspikes were definitely an asset as the snow was often slippery on the steeper slopes. (The worst section was getting onto the trail from the road – icy granules on top of polished hard-packed snow. I kept my microspikes on until road level on the return.) Off trail, the snow was variable, sometimes supportive, sometimes not (I sank up to my knees and beyond a couple of times). Marker poles traced the route the entire way to the summit. Watch out for sections where people have turned the trail into a slide. As a result, many snowshoers with tubular-style snowshoes with minimal traction were having real difficulty on those slopes. I witnessed a couple of people slip and fall, though they didn’t go far and didn’t seem hurt.

The whisky jacks were out in force at the top of the uppermost cross-country ski run before the big climb, and at the summit, swooping in from all directions. And of course people were feeding them for their photo-ops, including a family with a baby… :-/ Snowshoe hare and other prints dotted the snow. 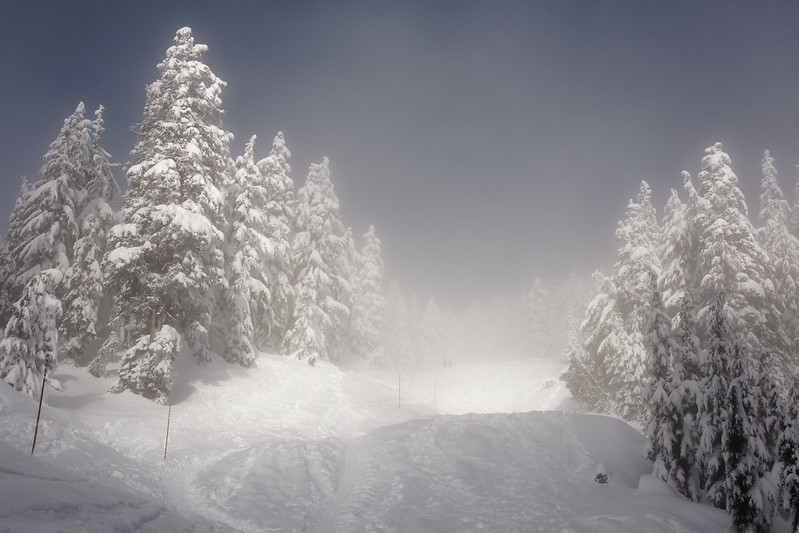 Story
There’s not much of a story to tell with today’s hike. Maria was working so I met up with our friend Brenda for a quick morning jaunt up to a local mountain summit, the promise of fine weather and better views than Saturday tempting us out. We made our way over the bridge to the North Shore, reaching the parking lot a little after 9 am, which was already filling up. The line of traffic leading to the downhill ski area stretched back beyond the turnoff to the trailhead, and we were glad we weren’t heading in that direction.

We left the snowshoes in the car and pulled on our microspikes at the beginning of the trail, setting off at a good pace. It was chilly and I had put on my gloves but after working hard to gain that first 100 m of elevation and a view back down to the parking I was ready to put them back in my pack. The next section was leisurely downs and ups (mostly ups) through the lovely snowy forest. The snow on the trail was packed hard, making travel easy. We made light work of this section, pausing only briefly at the beginning of the steep ascent before ploughing on up the hill. 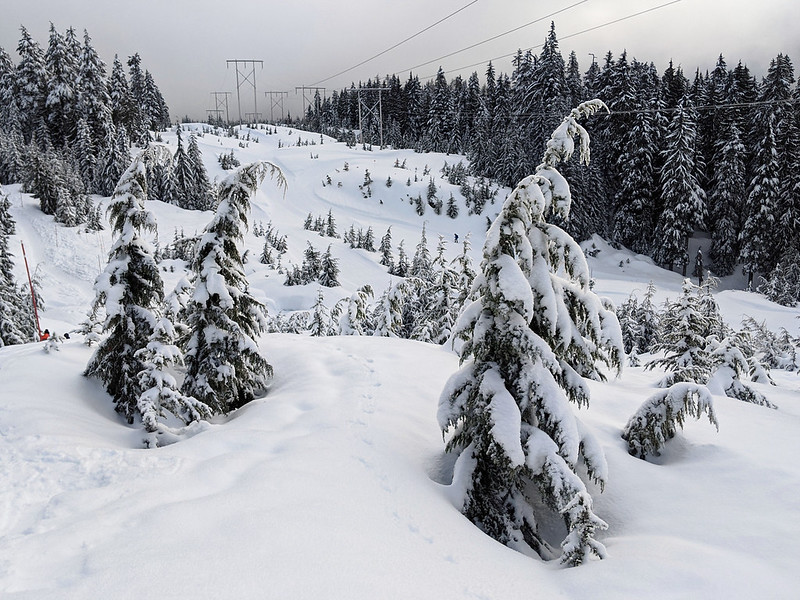 Despite not being in a hurry, we both seemed to be of a mind to push hard up the hill. I stopped to take a couple of pictures here and there but mostly we just hiked, appreciating our surroundings and greeting other hikers with good cheer. We chatted about the fact that BC hikers don’t seem to understand the basic trail etiquette of yielding to uphill traffic, and remarking on the fact that hikers in the US were almost the opposite! Maybe good manners will catch on here too? Seems ironic that a country known for its politeness doesn’t seem to have done a very good job educating its outdoor enthusiasts.

As we climbed, the clouds began to thin and sunshine appeared on the snow ahead of us, spurring us on. Snow-laden trees against a blue sky backdrop had us pulling out our cameras for photo-ops. And yet, like poor Tantalus, the sunshine kept eluding us forcing us ever upwards. We dug in to make it up the final steep climb, watching descending snowshoers tackle the slope with difficulty, especially those with the tubular frame variety which had poor traction. The route at the top of the slope had been redefined since our previous visit of a few weeks ago and zig-zagged off to the east through the trees, nicely avoiding the steepest section. 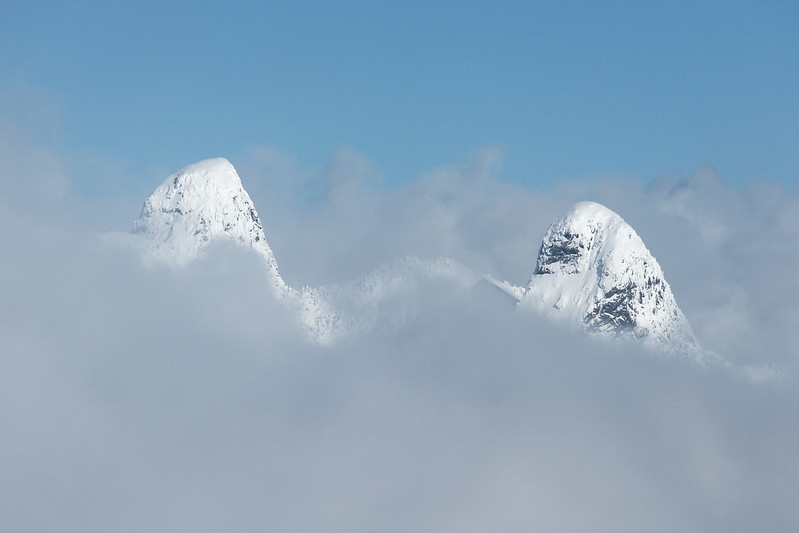 We emerged at the summit into sunshine, the Lions gleaming brightly ahead, with the shadow of the East Lion cast darkly onto the connecting ridge. We found an unoccupied patch of snow with a view and pulled out a snack and a drink. I had enough time to change lenses and fire off three photos of the Lions before the clouds caught up with us and obstructed the view once again. At least I’d got a couple! Looking up, the clouds had covered the sun once more and I found myself shivering as the sweat on my back cooled. We walked over to the summit itself, I sent an InReach message and attempted a few whisky jack shots with mixed success (plus I filled the lens cap with snow!).

I looked around and took a handful of “atmospheric” (i.e. cloudy) shots of the summit area before we began our descent. Brenda went on ahead while I took photos before making my way quickly but carefully down the slope (trying not to put off a couple of snowshoers who were, again, having difficulty descending). The mist thickened for a while, reducing visibility to a few tens of metres at most, but we soon descended below that layer. We stopped to chat with a family we’d seen on our ascent before continuing on down. At the base of the slope, more people were feeding the whisky jacks in order to get their Instagram shots, including one family with a young child. I try not to let it annoy me, but… 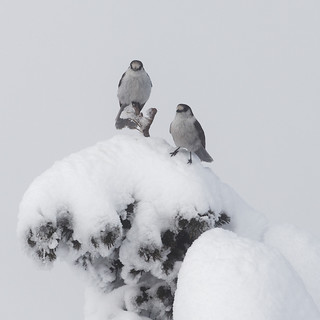 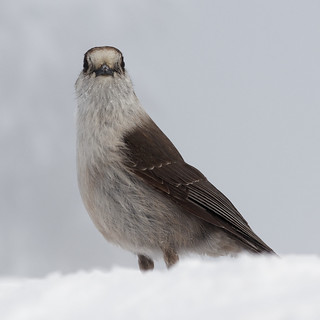 Then it was back into the forest and an easy, rapid descent. A group stopped us to ask for a photo, which I obliged, and we continued on. It wasn’t long before we were making our way back down the last stretch, past a couple of sizeable groups, and arriving back at the trailhead almost exactly two hours after leaving it.

Most of the time I like to really take in and appreciate my surroundings, but I also like to push myself, to test my physical limits. Given the number of fellow hikers and snowshoers today was a good day to be energetic, to help minimize my exposure to all the people by moving quickly; our more peaceful experience two days earlier being much more suited to appreciating the landscape and feeling immersed in nature. In either case the end result was the same: I was happy to have spent time outside.