Opinion
Perhaps my least favourite of the easily-accessible winter trails on the North Shore. However, I do enjoy wandering the Black Mountain plateau (especially after fresh snowfall) it’s often quieter than the other North Shore trails towards the end of the day, and the north summit of Black Mountain does offer a nice view of the Lions and Howe Sound at sunset.

Fact
We headed up the afternoon on the day that Cypress Mountain Resort announced it would be closing in response to the COVID-19 pandemic.

Driving up late in the day meant that finding parking was easy, and since we knew we’d be out after sunset, we parked in the overnight parking lot (about 700 m from the day lodge). The hikers’ washrooms at the old Black Mountain lodge were open (albeit lacking in soap and only one barely working hand-dryer) and there were plenty of backcountry access passes. Cypress Mountain staff had to let us through the skiers’ gates though I couldn’t tell if they looked to see if we had the backcountry passes. On our return, those gates and all the associated netting had been removed.

Orange-tipped poles marked the route as far as the south-eastern corner of the Black Mountain plateau loop, where a sign indicated that the route beyond was not marked. Despite that, a well-trod path in the snow led us out to Eagle Bluffs with no issues. Summer trail markers could be seen for most of the route as well, plus we had maps and GPS for backup. While most of the detours across lakes met up with the trail again, be sure you know where you’re going if you decide to follow one: don’t just wander off blindly! I don’t know why BC Parks doesn’t mark the route out to the bluffs as it’s extremely popular, and there is no avalanche risk that I can discern. The rocks at the bluffs were largely free of snow, so we could sit down and keep dry.

The other part of the trail that was unmarked was the offshoot to the north summit of Black Mountain, although, again, it’s popular enough that a compacted trail led to the top. This was where we stopped to watch the sunset. Descending was fast and easy (only about half an hour back to the base), although the snow was a mix of slush and loose grainy snow which meant our microspikes didn’t really have anything to bite into.

Watch out for whisky jacks at the bluffs, as they were very quick to swoop in on the lookout for food. We had no other issues with them on the rest of the trail. We were told that ravens and bald eagles had been soaring over the bluffs just minutes before we arrived: later we did see a few eagles in the distance. Visibility was excellent.

Distance: 10 km (we parked about 1 km from the trailhead)
Elevation gain: 530 m
Time: 4.5 hours including lots of time standing around taking sunset photos! 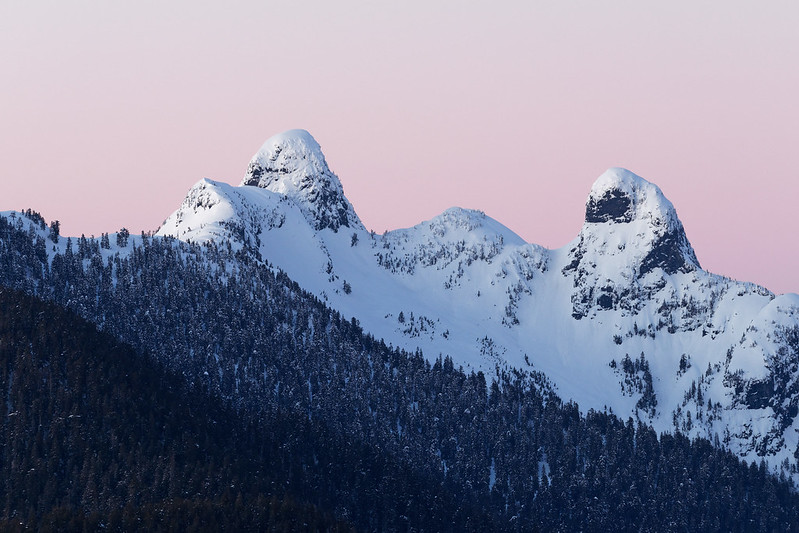