Opinion
Maybe it was because it was the first real hike in two months, but this was a surprisingly enjoyable hike. Sure, much of the route is on old logging roads through second-growth forest but the thundering waterfalls and prodigious spring greenery ensured our senses were fully engaged throughout the hike. I’ve always said that May is the best month for waterfalls, and that proved to be so very true today. Plus with the gun club being closed the beginning of the hike was considerably more peaceful than usual.

Fact
The end of Harper Road had plenty of space for parking, though it did get busy when the sun comes out (as we found out by the time we returned to the car). Watch for hikers and mountain bikers too.

We followed the route outlined in 105 Hikes, although we took a wrong turn near the start and ended up doing it in reverse, which was no bad thing in my view as it mean we ascended the steep Sawblade trail, which seemed preferable on a wet day. Having a printed map really helped to keep us on track, as there is an extensive network of (mountain biking) trails through the forest. Some sections of the route have signs but there clearly aren’t enough as we had a couple of groups ask us for directions. The Woodland trail is marked by blue markers which really helped. We were not able to get to the Coquitlam Lake View itself as the water level in Coho Creek was too high (making a mockery of the presumably otherwise well-named Dry Crossing Falls).

Most of the trails were not as muddy as expected, and the sections between logging roads were a delight to walk on, they were so soft underfoot. Today I appreciated the trail-building efforts of the mountain biking community a little more than I have in recent years. Firstly, having a trail-bed that could be ridden ensured that we didn’t misstep among the desolate second-growth areas where every direction looks like a trail. Secondly, they put in switchbacks on steep trails, something that some hiking trail builders could really learn! Some sections of the old logging roads were as rocky and loose as the trail to Lynn Peak, but there was often a softer edge (again used mostly by the mountain bikers) to walk on. (Of course that will disappear in time as it gets more and more use…)

As mentioned above, water levels were high throughout the circuit. Many creeks ran across the trail, some parts of the trails were running creeks. We had to pick our way carefully across a handful of what would normally have been small creeks. The trickiest was Pritchett Creek which took careful rock-hopping to cross. Many of the rocks had water running over them so waterproof footwear is highly recommended! Hiking poles also really helped.

All of the waterfalls were spectacular thundering cascades. I’ve seen photos of Sawblade Falls when it’s barely a trickle across the rocks but today we couldn’t even descend to the base without risking slipping or being swept into the raging creek. Absolutely stunning, all of them!

Spring is well underway with lots of greenery lighting up the forest. Alder and cottonwood were aromatic under the power lines. We saw salmonberry at various stages of growth, depending on elevation, skunk cabbage, yellow stream violets, decaying trillium (a nice surprise find!), devil’s club, foamflower, salal, and ferns galore. Extra greenery was provided by vine maples.

Birds were mostly limited to auditory “sightings”, varied thrushes whistling in the forest, wrens guarding their territory, with a supporting cast of robins and white-crowned sparrows. Plus that bird with the call that goes “chewy-chewy-chewy-chip” that I’ve never identified! 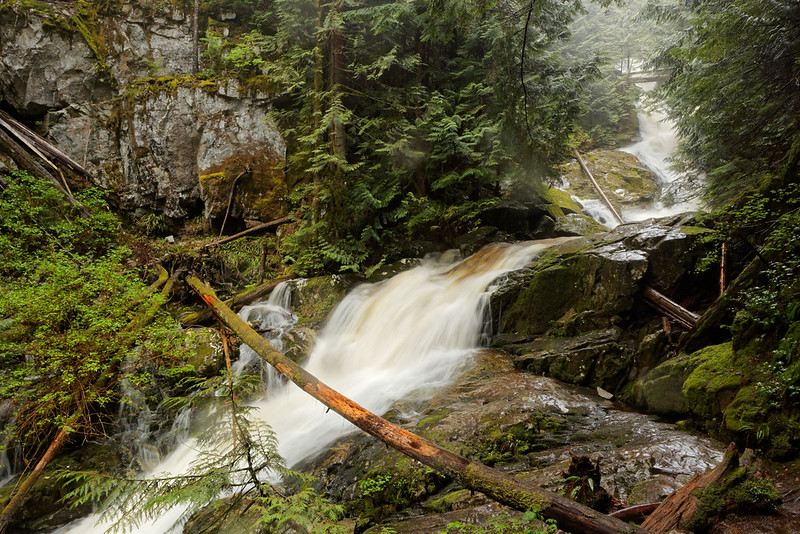