Opinion
It would be hard to find trails in worse shape than parts of the Gold Creek Loop in Golden Ears provincial park. The impact of increased traffic in recent years was sadly all too obvious, although some of the damage was undoubtedly due to heavy rain. By comparison, the Menzies trail was mostly delightful walking, if not especially exciting. While I find it hard to really recommend this hike, parts of the forest were an amazing, unreal green in the spring and, although occasionally busy, the hike remained peaceful.

Fact
The East and West Canyon parking lots fill up early these days, apparently by 8 am! Our 10:30 arrival meant we ended up parking at the main Alouette Lake parking lot and walked the Alouette Valley trail and Menzies trail to join up with the Gold Creek Loop (formed by the West and East Canyon trails), almost doubling the length of the hike.

The Alouette Valley and Menzies trails follow the road towards Gold Creek, rarely far from it but sometimes far enough to find peace and quiet. Both trails were in great condition, usually wide enough for us to walk alongside one another, apart from a few awkward muddy spots on the Alouette Valley trail, and some loose rocky sections on the Menzies trail, usually where water had run down the trail. None of the creek crossings had bridges, which wasn’t an issue except for Viking Creek which was braided and flowed onto a section of the trail. Today there was no problem getting across but it might be different in high water conditions. Salmonberry was encroaching on the trail in places, forcing us into single file. Also be aware that both are multi-use trails so don’t be surprised if you encounter horses or mountain bikers.

The West Canyon trail was in good condition as far as the detour down to the view of (lower) Gold Creek Falls. Again, on inclined sections where water has run, the footbed was loose and rocky. The steep descent to the view of the falls started off well but deteriorated significantly towards the bottom with rocky and slippery sections, including some tilted old corduroy road. However, it didn’t pose any navigation issues. Beyond this point the trail was, quite frankly, terrible. Loose, rocky and badly eroded, both from running water and significant foot traffic. Previous attempts to install steps on this trail have failed, with whatever soil was initially around them long gone from erosion. To my eye, there was evidence of poor footwear choices as new, parallel, trails have been created alongside the original, rockier trail: it seems clear to me that hikers in runners have opted for the softer ground to the side of the rocks and roots.

The new connector trail was welcome relief, and seems to have held up well over the past five years of use. The bridge over Gold Creek was great – so nice to be able to cross the creek and make a loop! By contrast, the East Canyon trail was in much better shape, despite also having rocky sections. The trail down to the falls viewpoint was another mixed bag, starting off in good shape but deteriorating significantly again as it descended steeply to the falls. Part of this is probably just the nature of it being a steep trail but, again, there were signs that many hikers have sought alternative routes over the years.

The lower falls trail back to the parking lot has been upgraded with copious quantities of crushed gravel since our last visit (admittedly in 2012). This is such an improvement on the mud-pits of old! One section remains slick and muddy, but the rest of the route looked mostly accessible.

The falls were in moderately-high flow, enough to be lethal. Expect to be soaked with cold spray at the viewpoint immediately below the falls!

In terms of flora, we saw lots of bunchberry, foamflower, piggyback plant, large-leaved avens, some starflower, fringe cup, Siberian miners’ lettuce, salmonberry (mostly now growing green berries), goatsbeard, western (or false) lily-of-the-valley, rattlesnake plantain, western columbine, and the leaves of a few trillium. The highlight was, without doubt, all the ferns unfurling, in particular the deer ferns and sword ferns.

Birds were the only wildlife we saw and heard, with varied thrushes (we actually saw one!), Swainson’s thrushes, robins, dark-eyed juncos, an unknown woodpecker, a dipper or two, Pacific wrens, a lone raven, an unidentified woodpecker call, a handful of what were probably Townsend’s warblers, and a distant grouse. Bugs were few and far between, but we did see a few mosquitoes. 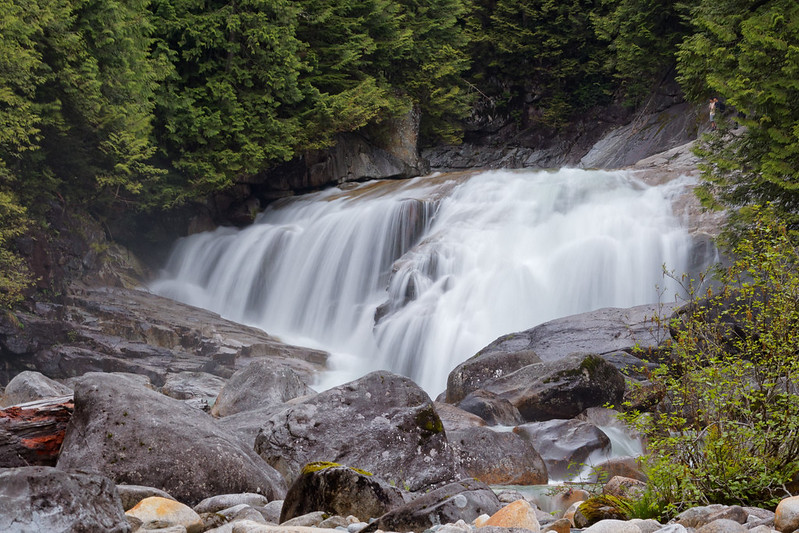