Opinion
A mixed bag on this loop made up from a few trails around Mosquito Creek. It’s all typical North Shore stuff: rooty, muddy, and steep. Some of it was bad, some of it was okay, and some of it yielded unexpected treasures (giant cedars!). Mostly I’ve never spent so long poring over a map trying to work out which trail I was on. If you’re familiar with the maze of trails in here, it’s probably quite easy. But if not, expect to spend a lot of time working it out, or getting lost and un-lost.

Fact
We parked on Prospect Road where there was plenty of space. Just be sure to stay out of the no-parking zones.

Our plan was to take the Cascades trail to, well, the cascades on Mosquito Creek (a hike we’d done in our first season in Vancouver), continue up to the Old Grouse Mountain Highway (OGMH) and return to the car by a couple of other trails. Thanks to trail closures and some strong hints that the OGMH was not a desirable route, we ended up taking a mix of Cascades, Dreamweaver, crossing Mosquito Creek and up to meet OGMH before taking Skyline (or a nicer trail parallel to it) back to the Baden-Powell trail and the car.

The trails were in decent condition, mostly not as muddy as expected and with only a few fallen trees to deal with (and those were only on the rough trail up to OGMH from Mosquito Creek). However, navigation was a challenge as there are many trails and old skid roads on the flanks of Mount Fromme. A map and GPS-based mapping app were invaluable (just be aware that your phone won’t locate you very precisely in the forest) but even then it was sometimes hard to know if we were on the right trail. Trail markers were sporadic, especially on the Cascades trail. The Cascades trail was closed at the point it descended to its namesake water feature on the creek, most likely due to a washout, as far as we could tell. On the Grouse side of the creek, the steep route up to join the OGMH was well marked; and it needed to be! At the junction with OGMH, someone had placed sticks and branches across OGMH to discourage hikers from continuing north along it. I have no idea if that’s because there are good reasons to avoid that section of the trail. After the junction there were a few signs, and the Skyline trail was marked. However, Skyline was a mess of ankle-turning rocks so we opted for the much softer trail in the forest on the east side of Skyline. It also had the advantage of having some switchbacks to lessen the steepness of the descent.

Crossing Mosquito Creek was straightforward despite the lack of bridge and the slippery rocks. Our Trail Ventures map from 2012 shows a footbridge at this crossing but today there was no evidence of a bridge, just a slippery fallen tree that we were happy to ignore. Crossing here in high water would be tricky. A pair of hikers who followed us to this point turned round here as they were clearly not sufficiently equipped to continue. Speaking of other hikers, we only met about half-a-dozen groups in total, about half of which were well-equipped and enjoying themselves, the other half still enjoying being outside but had largely no idea where they were.

The floral highlights of this hike were the abundant coralroot just beginning to bloom (including some that were a beautiful pale yellow) and the grove of amazing old-growth cedars on the western slopes of Grouse Mountain. Other than that we saw starflower, large-leaved avens, skunk cabbage, bunchberry, the first leaves of queen’s cup, western lily-of-the-valley, goats beard, deer ferns, yellow stream violets, herb robert, and what looked like some variety of twisted-stalk.

Wildlife: several banana slugs (ranging in colour from bright yellow through to mottled green), a varied thrush hopping along a downed log with a beak full of morsels to feed its young (we heard others in the forest too), dark-eyed juncos, a few wrens, a woodpecker, robins, and a couple of booming grouse. 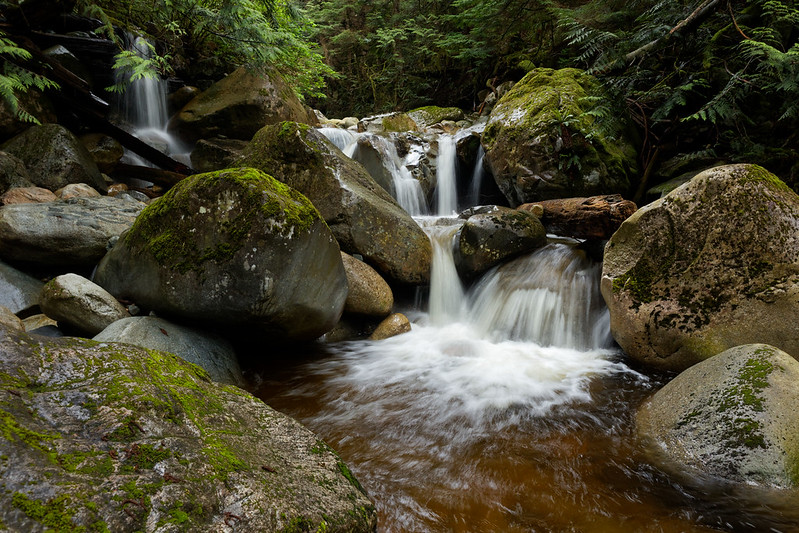