Opinion
A stunningly beautiful area with great camping for overnight trips. It’s a very steep climb, but it’s not too long and the meadows and views are totally worth it. Despite its unassuming name, Palmer’s Pond is well worth a visit: a deep, blue subalpine pool set in a small bowl. Highly recommended.

Fact
The Sowaqua (Su-WAH-ku-wa) forest service road is extremely rough in places and has numerous spots where it may wash out in future storms. It’s two-wheel drive but there are a few spots where a bit of clearance is required to get over small berms formed by debris slides. It’s also twisty and has its fair share of potholes. The first couple of kilometres are steep, rough, and very loose. There are also a number of deep bumps (likely formed when vehicles have lost traction) where low clearance cars may scrape their undersides.

We measured just over 19 km on our GPS to the trailhead (the road markers say 20 km). Either way, allow about 50 minutes to an hour to drive this road. Be sure to ignore the new spur that goes uphill at the 16.25 km mark! Follow the signs at the next fork (left for the Palmer’s Pond trailhead, right for Manson’s Ridge).

The forest recreation site at the trailhead is surprisingly nice with a sheltered kiosk that has information about the HBC Brigade Trail, a picnic bench, and a few more benches arranged around a fire ring. The space is grassy with room for 3 or 4 tents (more if you know your neighbours well!). A trail leads into the trees where there is a metal food cache and one of the cleanest backcountry outhouses I’ve experienced. (The outhouse is also very dark inside!) The water source is marked, with steps leading down to the creek from the road. There’s another camping spot about 30 m beyond the outhouse in a small clearing among the trees. The trailhead has parking for 8-10 cars, but the road is wide enough that parking along the edge wouldn’t impede traffic in any way.

The start of the trail is marked by signposts, whichever direction you’re hiking (east or west). As expected from the stats, it’s steep and gets really steep in places. It was a bit of a slog with an overnight pack! But it’s well-defined and has a good foot bed for most of the route. No big steps or slippery roots to deal with. Crossing Angus Creek was easy though the rock is slick. The descent into Campement du Chevreuil (Deer Camp) passes through some boggy meadows. I foresee these spots getting worse and more extensive unless it’s possible to put in some boardwalk.

The Campement du Chevreuil is a lovely little camping area with three tent pads and an open grassy area where several more tents could fit. (Alas a couple of groups of backpackers decided against using this area and opted to camp on the meadows further up the slope instead :-/) There’s a metal food cache, a fire ring, benches to sit on, and an open-air throne with a nice view of Mount Outram. The creek next to the camp was running well, though the signboard at the campground suggested it may run dry later in the year.

Beyond the campground, the trail rises to the shoulder of the ridge with Mount Davis before descending towards Conglomerate Flats. Here we encountered a couple of snow patches but nothing big enough to pose a problem. A well-defined side trail leads down to the rocks at the eastern edge of Palmer’s Pond (a good place to cool your feet). It’s more of a tarn than a pond, and looks to be a good swimming lake with steep drops into the water. A faint trail leads off from the shoulder up towards Mount Davis. It can be followed most of the way to the highest sub-peak just before the summit, which is where we stopped having run out of time/energy to make it to Mount Davis itself. However, there’s a fair bit of microterrain and a few patches of steep heather and krummholz to push through. Experienced hikers only!

Wildlife was mostly birds: hermit thrushes, varied thrushes, dark-eyed juncoes, wrens, chickadees, nuthatches, grouse calling, a ptarmigan calling, and an unidentified raptor that flew over the campground. Expect rodents at the campground – we heard some scampering in the night, and saw a couple of spots in the grass where something had been digging. A noisy chipmunk was guarding its tree about a quarter of the way up. The highlight was a lovely cinnamon black bear at the far edge of the meadows above the campground, barely two minutes from our tents. Our voices startled it off into the trees and we saw no more indications of its presence. The lowlight (as it were) was all the mosquitoes, black flies, and no-see-ums. During the day they were merely annoying but around dusk they became a real nuisance. (Our backpacking neighbours at the campground must have used multiple canisters of DEET on themselves….) Thankfully they disappeared after dark so we could go and photograph Comet NEOWISE in peace.

A big thank you to the Hope Mountain Centre for all their efforts in building and maintaining this trail. 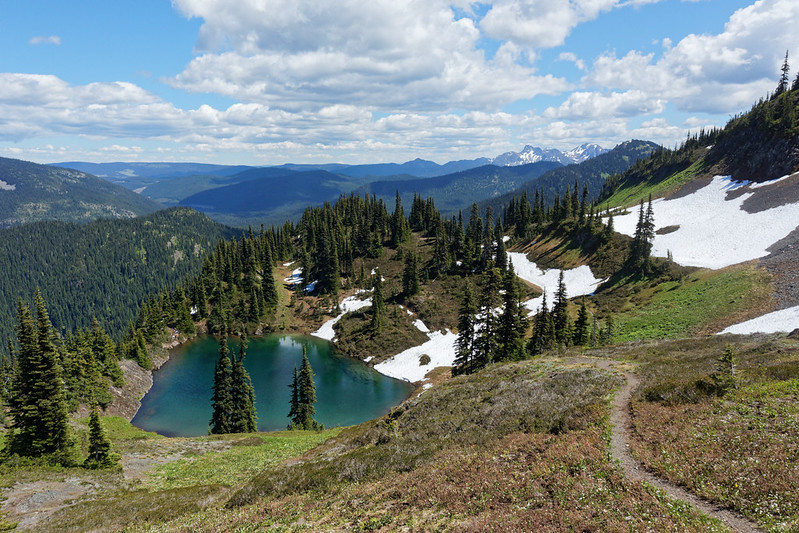