Opinion
A spectacular summit that is well worth the effort to reach. But the effort is real: a capable vehicle is a must to get close to the trailhead, the mud will threaten to sap every ounce of willpower, as will the copious talus. And then there are the bugs. However, it’s not all about the summit. The area has a number of stunning lakes and gentle meadows that invite exploration.

Fact
Getting to the trailhead is the first challenge. Branch 200 off the Squamish Valley FSR is steep and has a lot of loose rock but is otherwise in great shape. (If you don’t have a 4-low range, I recommend using first gear to get up and down the steepest sections and being light on the gas to avoid spinning your wheels.) The spur towards the trailhead is rougher with a couple of lumpy sections and small water bars that might ground a low-clearance vehicle. The main challenge is an ever-worsening washout that threatens to destroy the road. It was manageable in our CR-V on the Saturday morning, but by Sunday afternoon, the uphill exit from the washout was much worse. Note that getting it wrong here could very well end up with sliding into the creek bed. On our way down we noticed a Toyota 4 Runner and two Subaru Foresters parked before this washout whose drivers didn’t fancy risking it. (We also saw 4 Runners further up, along with mostly pickups.) It was definitely a bit nerve-wracking but we made it okay.

The second spur is worse still with an eroded water bar to get through followed by a couple of small berms and water bars that need a bit of clearance. Alders are encroaching onto this section of road which added to our pin-strip collection. The road is also much rougher here and needed care going up and coming back down. We parked at a bend in the road next to an old spur, about 1.7 km from the landing at the trailhead (elevation just under 1000 m). The road became steeper again beyond this point with more loose rocks. Four-wheel drive seemed to be a requirement.

The trail through to the first lake is an absolute mess of mud and/or wet meadows. There’s no doubt it’s worse at this time of year while the ground is still wet, but I also feel that the mud has become more extensive as more and more people have sought to skirt it rather than find a way through. New trails have been beaten through the meadows and understory that are becoming at least as bad as the original mud-pits they tried to avoid. If you hike this trail, please wear appropriate footwear (and gaiters) and stick to the already muddy sections. Some sections have plenty of pieces of wood and/or rocks to use as stepping stones and there is no need to try and go around (as some folks have done).

Beyond the mud (which finally ends just before the first lake), the trail leading up towards the second lake (labelled Spearpoint Lake on Bivouac.com) is clear and easy to follow. Beyond, the way is obvious: cross the creek and work up the talus to more flagging and a short section of trail before crossing back over the creek to pick up the trail near the edge of the lake. The trail is clear up through heather and meadows to a boulder field where a handful of cairns guide the way. After that you’re pretty much on your own: Matt Gunn’s description is accurate. There was plenty of snow still which made it easier in some respects, though it was really slushy on the descent which was not fun.

The scramble at the end of the cliff band was straightforward, though one spot without good handholds required a couple of moves that might be unnerving for total beginners. No real exposure to speak of though (thankfully). After that another much steeper snow patch awaited us, which was definitely ice axe territory and I was glad of mine. Descending the snow was awful, so we stuck to the rocks. Gaining the ridge was fine, and then the final scramble to the summit. I had to leave my pack behind as it interfered with my ability to look up to see where I was going. At first the scramble felt a bit tricky but it didn’t take long to realize it was quite easy and we were soon on the summit with its amazing views.

On our second day we headed due north to the “other” second lake, a clear trail leading us pretty much all the way to a meadow with a fallen First Nations post. When that ran out, we followed a lightly beaten path through heather up the right side of the creek (river left) up and around to where the terrain levelled off. No trail here, but staying on the east side of the next bump, we found another hint of a trail that took us through to the snow and boulders at the edge of Seagram Lake.

Most people camped by Spearpoint Lake, and it looks like there are quite a few clear spots. We stayed in the meadows closer to the first lake, a flat grassy spot sufficing for a night (though not a great spot for multiple days). However, it was pretty dewy and damp by the morning. A handful of people had pitched tents among the rocks at the third (Heapus) lake. Note there are no facilities here so please practice Leave No Trace!

Wildlife: mosquitoes, black flies, horse flies, deer flies. In large numbers. Other than that, we saw dippers at the first lake, dark-eyed juncoes, and heard hermit thrushes. We heard pikas and marmots above the third lake (Heapus Lake on Bivouac.com), and saw a marmot sentinel lit up by the evening sun on our descent. Very cute! 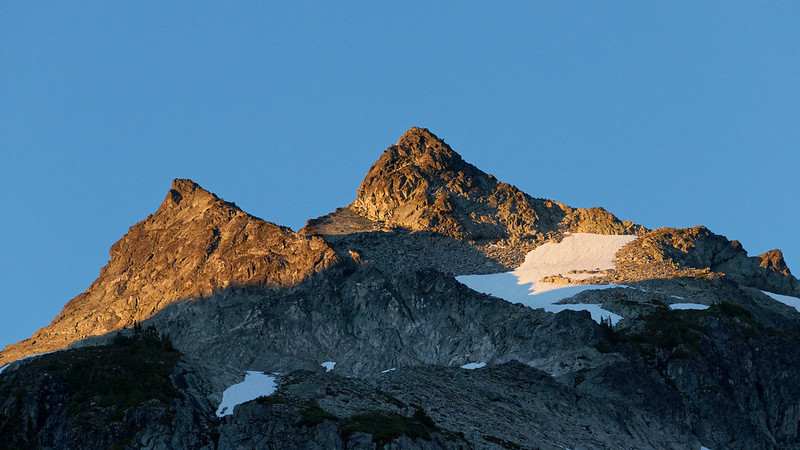