Opinion
A beautiful area with lots of potential for exploration, I think we’ll be back. Lakes, ridges, summits, all within relatively easy reach. However, beyond the lake, there are almost no trails so navigation skills and comfort on steep slopes (dirt, heather, or talus) is necessary. Definitely more of an experienced hiker’s destination.

Fact
The Blowdown FSR is in great shape and very easy to drive. Just watch out for the numerous little water bars, especially when the road is dry and sandy as they tend to become very hard to spot. (Ask us how we know that…) The first water bar is probably the hardest to get through as it is on a steep slope but the rest are easy for vehicles with any clearance. We parked at the end of the easy part of the road, where many park for Blowdown Pass. The spur leading off to the start of the trail is driveable (and campable) but has a small ditch at the entrance that definitely needs higher clearance than we have, as well as four wheel drive to make it out safely (it’s a short but steep climb up).

The trail begins with a log crossing over a creek. The Trail Ventures BC map marks this as a major creek crossing. When dry, the wide log is an easy walk over, although it might be different when wet as it slopes significantly. Note that the rope is too slack to provide much more than moral support. Beyond the crossing, the trail follows the old road before flagging guides it into the trees. There is a well-defined footbed for much of the route, even where the rhododendron is growing back over the path. The exception is where it passes through wet meadows, where it often becomes indistinct, and across a couple of boulder fields. Flagging tape marks the exit points from the boulder fields. Occasional cairns mark the general route across the boulders; in general, it’s best to follow the contour and stay close to the edge. Another creek crossing requires care to balance over rocks and a small fallen tree but otherwise poses no real problems. The rope here is much better, being under greater tension.

There were a couple of fallen trees to deal with: one was easy enough to crawl under, the other was okay to get over (at least for people with longer legs than mine!). Watch for sharp branches that are waiting to stab you in the leg!

The wet meadows are starting to get muddy in spots, though nowhere near as bad as the Tricouni trail of last week. They still require careful foot placement, so use rocks, roots, or bits of wood where possible! The final climb up to a small lake is steep but is mostly across heathery slopes with a few small patches of boulders. A fork in the trail provides momentary confusion but either route will take you to the lake.

Camping options are limited. A couple of groups settled for the flat meadows by the lake but they were mostly too wet for us (and we needed space for three tents). We found a suitable flat patch among the heather about 50 m beyond the cabin, but in general good spots are few and far between. The cabin itself is in excellent condition and nice and clean. It was far too hot on a sunny day, though it would make an excellent choice for cooler weather. There is an outhouse too, so there’s no need to dig cat holes or leave TP lying around. Yay!

Exploration options are many. We ventured up to the col above the lake that leads down to Cirque Lake on the other side, though we didn’t go all the way to the lake (it looks easy though), explored a tarn nearby, I hiked up part of the ridge that leads to Silent Hub to get a better view of Cirque Lake (the rest of the way looks good too). In the other direction (east) there are another couple of gorgeous tarns that invite you to spend time relaxing. The ridges leading up to Notgott and towards Gotcha look inviting too.

Our main side-trip was to head into the trail-less South Fork Cottonwood Creek valley in search of a route up to the Silver Queen mine ridge (referred to as the Angel’s Walk on bivouac.com), following the route marked on the Trail Ventures BC map. I would not attempt this route without a map, compass, and GPS! While the route is straightforward (you stick close to the creek) it is very remote; you will probably be the only people in the entire valley so be sure you know what you’re doing. Finding the best route up to the ridge requires paying careful attention to the map, but once clear of the trees, a meadowy avalanche path allows straightforward access, ultimately leading to a boulder field. Here, we found it best to stick to the edge of the boulders, staying on meadows and heather as much as possible. After that the way is obvious and it’s just a trudge over more boulders and heather to get up to one of the peaks on the ridge. But seriously: think twice before doing this trip!

Wildlife… not much to report. Oh yeah, except for the hordes of effing mosquitoes! Wow they were about as bad as I’ve ever seen them, especially in the Cottonwood Creek valley. Without our bug shirts I think we would have had an utterly miserable time. I actually resorted to wiping my hands with DEET to keep them at bay. Horse flies and black flies joined in just for fun. We saw and heard marmots, heard pikas, and startled a snowshoe hare on the logging road. We saw deer and carnivore prints (coyote?) in the mud in the Cottonwood Creek valley. Our closest encounter was a female grouse that exploded out of the undergrowth and put on a nice intimidating display for us so her brood could escape. Scared the life out of us! 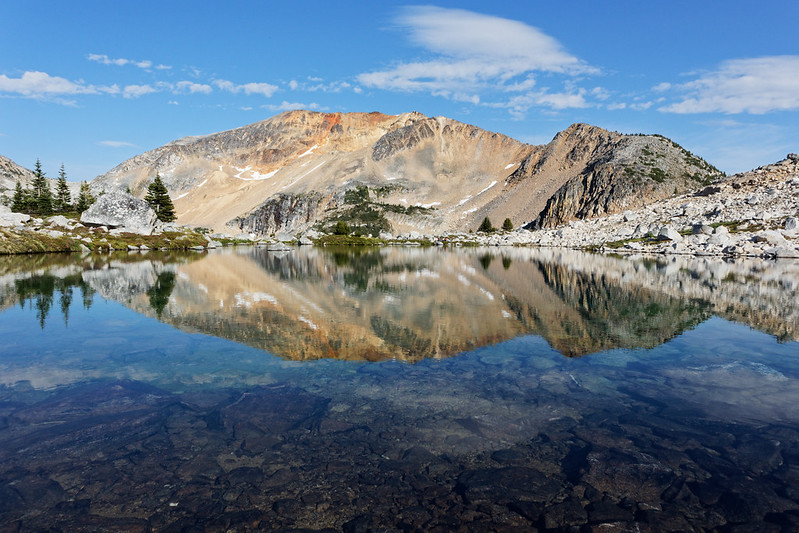