Opinion
A superb hike pretty much from start to finish, even in the smoky and hazy conditions. The combination of high mountain passes filled with meadows and yellowing larches, sheer rocks faces, tumbling creeks and waterfalls make this a spectacular trip. Popular but deservedly so. The Rockwall itself is a jaw-dropping spectacle that photos simply cannot capture. A must-do hike! The grandeur of the Rockies never loses its ability to inspire awe. 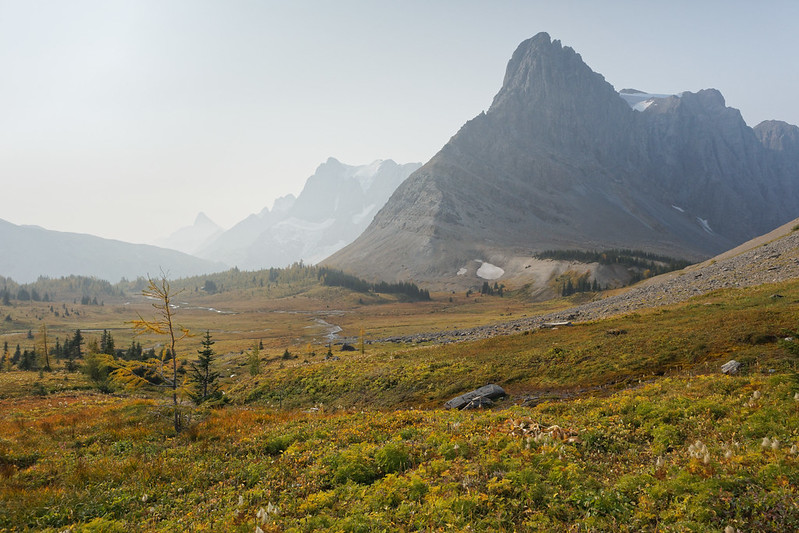 Fact
We hiked from south to north, beginning at the Floe Lake trailhead and exiting at the Paint Pots. We had a group of five and left one car at Paint Pots to enable a shuttle at the end. Parking wasn’t an issue, but it looks like the Floe Lake parking lot fills up quickly on weekends.

Our trip took 5 days, camping at each of the main campgrounds along the route. Floe Lake is a lovely campground set in open forest with views of the lake and the cliffs on its far shore. By comparison, Numa Creek is set in lush forest by the creek with little in the way of views. Tumbling Creek was nicer again, with camping among the trees and dining areas in the meadows with views up towards Tumbling Peak, while Helmet Falls was also nice, set between two creeks, although many of the tent pads were very close to the trail through the campground and close to one another, so you may experience some noise from your fellow campers. The falls are visible from the dining area. Each campground had multiple metal food lockers and two outhouses (wrapped in porcupine-proof wire). Take a headlamp when using the outhouses: most have only a single small window! Only Floe Lake had a campground map, though it was of dubious accuracy. The only other campground we passed was at Helmet/Ochre Creek junction. It looked okay, but the tent pads were close to one another and right on the trail. We met no park rangers in the backcountry and our camping permits were never checked.

Water access is easy in all cases: the lake itself at Floe Lake (though there is a creek at the far end of the campground near the warden cabin), Numa Creek, Tumbling Creek (silty from glacial runoff, with one small clear-running side creek that won’t clog water filters), and Helmet Creek (a little bit silty but not too bad – the other creek was clear). Camp fires are only allowed at Numa Creek and Helmet/Ochre, but of course that doesn’t stop people. I mean, really, who the hell cuts the top of a live larch to use for a stupid little campfire? In another example of idiocy, a campfire at Tumbling Creek was placed right on top of a mossy patch, killing it forever. At the very least, it could have been built on the stony flats by the creek, just a couple of metres away. Ridiculous. Anyway, rant over.

The trail was in excellent condition and easy to follow the entire way, mostly a well-defined, single-track footbed, sometimes carved into a shallow trench by the passage of so many boots. All trail junctions were clearly marked with signposts. There were bridges over all major creek crossings, with all but one intact and easy to cross. We encountered only a handful of minor, shallow (literally a couple of inches deep) creek crossings that were no obstacle at this time of year. Ascents and descents were mostly on well-graded switchbacks but the trail sometimes took a more direct path, albeit usually for only a short distance. Apart from that, the trail was a joy to hike.

Some flowers were still hanging on, refusing to believe that summer was over. Paintbrush, arnica, purple mountain daisies and asters, pearly everlasting, and fireweed were still blooming in places, with even a few optimistic strawberry flowers on display. Autumn gentian was blooming in profusion in the high meadows, perhaps the most extensive blooms we’ve ever seen. This tiny lilac flower is so easy to miss, so tread carefully if you have to venture off trail for any reason. Signs of flowers past were typified by the many, many moptops along the way and the pungent scent of decaying valerian. Autumn colours were nearing their peak, with crimson fireweed, willow and rhododendron glowing yellow, and berry bushes varying from yellow to orange. And of course, the larches. They were just beginning to turn, with many still green or a yellowing-green. But a significant number were turning gold, and they were a stunning sight. (Based on photos seen a week later, the colours reached their peak the week after we hiked the trail.) It was a joy to walk through these golden larch forests again.

Wildlife was sparse, with ground squirrels already gone into hibernation. We saw a number of marmots near Wolverine Pass, and pikas in several rocky areas. Birds were mostly heard rather than seen, including chickadees, juncoes, kinglets, the occasional flicker, raven, and varied thrush. We did get a couple of good varied thrush sightings: they’re bigger than I remember. We saw two raptors: one looked like an eagle, soaring on thermals near Tumbling Peak, and the other was a small hawk that flew past us and landed in a tree high in the alpine. We saw only a single grouse (or was it ptarmigan?), right next to the trail, one golden-mantled ground squirrel, and had one fairly close black bear encounter. Thankfully, the bear was happily feeding on berries about 10 m off the trail and was content to continue doing so as we walked past. Surprisingly, there were a few mosquitoes and black flies still around, though they were few in number. But still, I picked up a couple of unwelcome bites! 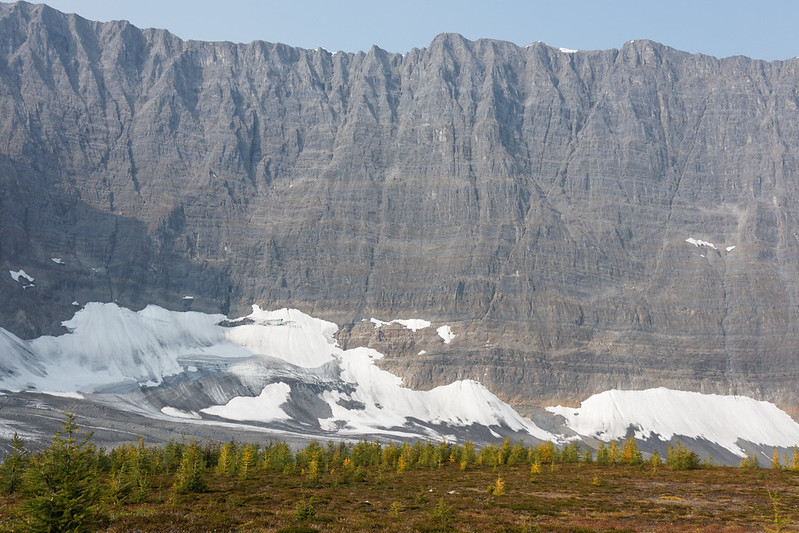 To be honest, those minus points are really so minor that it feels a bit churlish to even write them down.

Story
This is another trip write-up that will have to be split into separate days, and may or may not be completed this year… Here’s our itinerary over the five days of our trip with estimated distances and cumulative elevation gains and losses (times in hours:minutes in parentheses):

No day was too long, although day 4 took longer partly because it was just so scenic! The hike out on the last day felt longer than it really was, but that’s not unusual for the last day of a multi-day trip!

Our side trip to Goodsir Pass on day 4 (well worth doing, though it’s better as a morning destination) was 9 km with 460 m of gain and loss, and took us exactly 3 hours. Allow about 90 minutes for the detour up to Helmet Falls. It, too, was well worth doing. 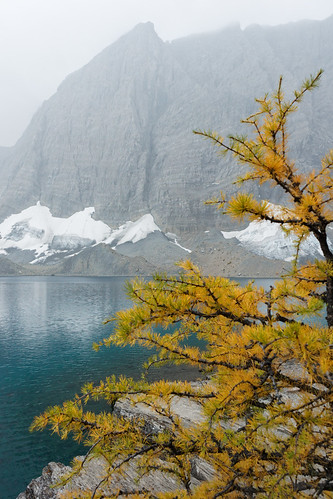 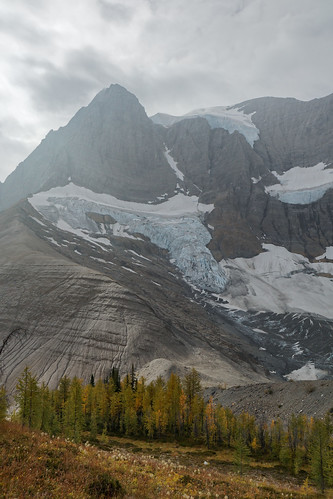