Opinion
A very enjoyable hike on a misty day, Hollyburn remains one of our favourite go-to hikes on the North Shore even when the views are non-existent. It’s not too long or difficult and the trail is mostly quite decent, at least by local standards (which means there’s still mud and plenty of roots to deal with). The whisky jacks are far too tame, so please don’t feed them.

Fact
Plenty of parking on a misty autumn day. The washrooms at the cross-country parking were open though they had run out of paper towels by the end of the day.

We decided to head towards First Lake to pick up the Baden-Powell trail, following that to the warming hut under the power lines where we joined the usual route up to the summit. The trail was in decent shape, with the usual muddy spots (to be expected after the rain we had over the past couple of days). There was plenty of boardwalk to get over the worst of the mud, and usually enough rocks to step on in other places. Lots of water running down many sections of the trail as well. Boots and gaiters were helpful as the puddles were not very deep and many could be walked through without issue. The recent storm had dropped a little bit of wet snow above about 1230 m which had mostly melted, though a couple of small puddles near the summit were still frozen.

Fungi have taken over from flora for the most part with some spectacular fly agarics on display, along with several other types that I don’t yet know. No sign of any blueberries or huckleberries, but the bunchberry was out in force (though I didn’t try any today – they were starting to get a bit mushy), and there were even a couple of blue queen’s cup beads on show. The berry bushes have been losing their leaves, and their colour looks to be fading fast. Copper bush and white rhododendron provided the most colour, both a cheerful bright yellow.

A couple of ravens were calling to one another near the parking lot, kinglets darted in the tree tops, a few wrens tweeted at us (chip chip!), a sapsucker patrolled one of the mountain hemlocks at the summit, and of course the squadron of Canada jays cruised the various groups of hikers looking for handouts. We even had a Douglas squirrel scamper around our feet looking for crumbs. That’s just ridiculous. 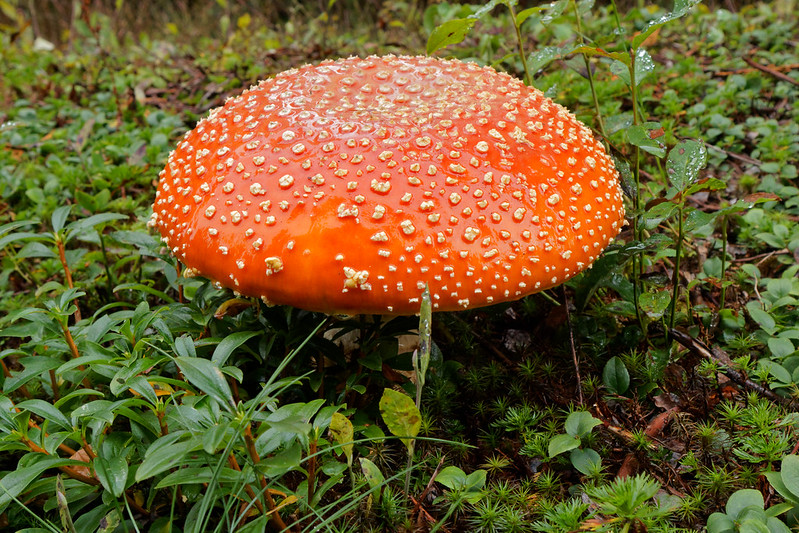