Opinion
An excellent hike for a clear sunny day, even out of flower season. The trail is steep in places but mostly enjoyable hiking, with open forest and great views of the jagged peaks of the North Cascades in one direction and the Coast Mountains in the other. Not a hike for solitude, but it didn’t feel crowded.

Fact
The parking lot fills up fast! We arrived about 9:30 and it was full with cars already parked on the roadside. It’s best to park on the road below the parking lot as it gets narrower further along. The outhouses were clean and stocked with TP.

The trail was in great condition with a few very welcome improvements on the steeper sections near the top where new steps have been created. A couple of the switchback shortcuts in the forest have been roped off from above, but that didn’t seem to stop people hiking up the shortcuts. There’s more to be done here, for sure, but it’s a great start. I feel like part of the trail has been marked differently too. However, it seems to me that most people aren’t looking for trail markers and just follow what looks like the most obvious path at the time.

The only snow we saw was just beyond the cairn and it was the smallest amounts off the side of the trail. Where the overnight frost had melted, the trail was slick with fine mud, which made it a bit slippery where it was steep.

No flowers, and precious few fungi too, just some tiny orange pinhead fungi along the ridge. However, the warm sun released some of the remnant scent of valerian in the meadows, while the sweet scent of the subalpine firs was really intense.

We had a couple of great wildlife sightings: a pika near the first viewpoint, and later, a northern pygmy owl in a tree right next to the trail. We even got to see it dive down to catch a vole, the poor thing squeaking away before being carried off to a nearby perch. Wow! Apart from that, we heard ravens and encountered at least two groups of pestering whisky jacks. (PLEASE stop feeding them!) We actually didn’t dare bring out snacks at one point as the birds were so bold. In the trees we heard chickadees and kinglets, and spotted a sapsucker swooping between a couple of trees near the first lookout. 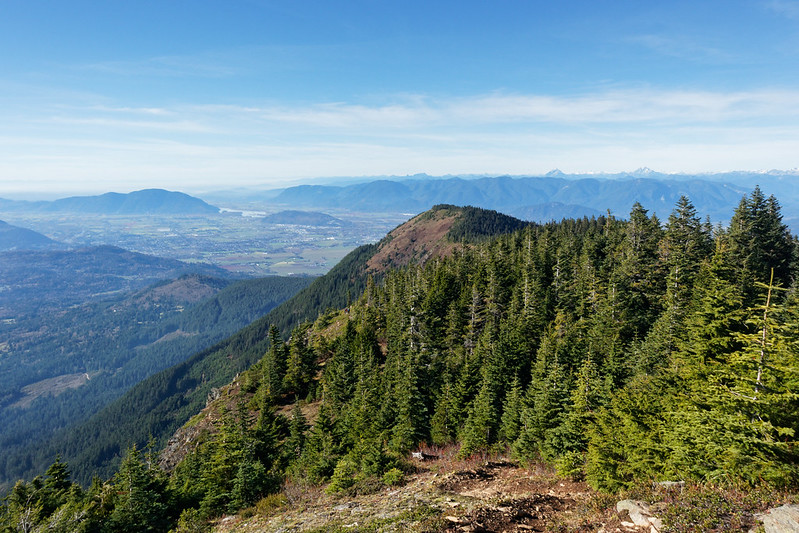