Opinion:
Another superb area in the South Chilcotins with expansive meadows, wonderful hiking, and a real sense of being somewhere truly wild. Pretty much every step of this route was a delight as we ventured through three separate valleys, even during those unsettling moments where the trail disappeared on us, or when we realized we were following an enormous grizzly, or when we were caught in cold snow squalls. The rewards were utterly heart-lifting views and simply sublime exploration. In addition, we met only 3 other hikers and 5 mountain bikers all week which suited our trio of introverts just fine.

As I mentioned in the summary of our previous visit in 2018, it’s not a place for beginners. Anyone venturing here must be fully self-sufficient and prepared for whatever the weather and landscape will throw at them. Trails come and go. But experienced and confident backpackers will love it!

Fact
The Hurley FSR was in reasonably good shape, although rough and bumpy near the high point at Railroad Pass, and there were lots of potholes between there and about the 22 km mark. But we managed to keep up a reasonably good (and safe!) speed. The remaining roads (Tyaughton Lake, Taylor Creek FSR, Mud Creek FSR, and Paradise Creek FSR) were in great shape, though quite slick when wet, especially on the hills. The Paradise Creek FSR had a lot of growth in the centre of the road which brushed the underside of our car. I recommend recording a GPS track and following it back on your return trip as the turnoff is very easy to miss (we ended up driving in the wrong direction for 9 km before we realized…!). Also the TrailVentures BC map and guide book are essential companions. We parked at Trailhead M on their map where there was plenty of flat grassy space for half-a-dozen vehicles or more (which would have made good camping too: the other grassy area is on a slope so less good).

We camped at the Tyaughton Creek Forest Recreation Site on the night before we started as the BC Hydro site at Gun Creek was still under a COVID-19 closure. However, the BC Hydro campground had reopened by the time we returned a week later and we stayed the final night there. Tyaughton Creek FRS was fine, I guess. There was an outhouse and picnic table and plenty of space for camping. However, the space wasn’t great for tent camping: the ground was hard and rocky, or covered with tall grass that I didn’t fancy walking through (in case of ticks). When wet, the dirt turned to slick mud. By comparison, the BC Hydro site was a delight: dry, airy, and set among beautiful ponderosa pines and cottonwoods.

The Tyaughton Creek trail was in excellent shape and easy to follow. It crossed a couple of small streams but they posed no problem to step across. On our return, a few small trees had fallen across the trail in one spot but they were easily crossed. I imagine they have been cleared by now so the mountain bikers can pass. The only downside of this trail was the unobstructed view of the opposite side of the valley being stripped bare of its forest. The loggers were working on the day we hiked in, and the noise from their operations carried easily across the valley. The trail up towards Castle Pass was signposted and was surprisingly nice to follow, if steep in places. This trail ran out abruptly in the meadows just above the treeline and it took a few minutes before we picked it up again as it levelled off. Beyond there it was, again, easy to follow all the way to the informally named “Marmot Ponds”, and in great shape with only a few muddy spots.

Things got a little confusing at and beyond Marmot Ponds. A lightly beaten and flagged trail led uphill but that didn’t seem to go where the trail was marked on the map. We wasted some time and energy trying to follow other minor trails that stayed south of Marmot Ponds, eventually bushwhacking through the trees to find and follow some flagging tape that led us out into the next meadow. Once out in the meadow, there was enough flagging to guide us over the open ground until the trail became obvious again. On our return, we found that the uphill route past the ponds was in fact well trodden and cleared through the forest, so don’t do what we did! Just follow the trail :-)

Thereafter a trail was easily followed all the way up to Castle Pass and down towards Paradise Creek where we followed one option across the creek that petered out. It took a short section of meandering to find a beaten trail again through the flat grassy area by the creek. This trail could be followed further downstream, at least as far as the crossing of the North Fork of Paradise Creek (it looked like it continued on downstream). Pay close attention to what the TrailVentures BC map is telling you: the trails really do sometimes just disappear!

Our exploration days took us on occasional trails up to the ridges bounding the headwaters of Paradise and Little Paradise Creeks. Here you’re mostly on your own with the map for guidance. Route-finding was easy on the ridges, though things might get tricky when the visibility is poor. The ridges were easily hiked at all times, with no exposure or difficult sections, the exception being the northern approach to the col below Mount Cunningham which was steep, loose talus. We also had to cross a steep snow slope, but thankfully the snow was slushy and easy to cross (we wore microspikes anyway). Just be aware of lingering snow early in the season.

We camped at Marmot Ponds and in the grassy meadows of upper Paradise Creek as marked on the TrailVentures BC map. As expected, there were no facilities: it’s definitely a place where you should already be good at leaving no trace. The meadows are not heavily used so finding a good spot that didn’t crush a thousand flowers was tricky. The camping areas were also big enough to keep eating and sleeping areas well separated, and there were enough decent trees around to hang our Ursacks. Marmot Ponds has a few ponds for water, though we opted for the trickling stream that drained one of them. Paradise Creek was quite silty with the early summer runoff (though less so in the morning); the far (west) side of the Paradise Creek camping area nearer the forest had a much clearer stream.

In terms of wildlife, our sightings were limited to marmots, a few deer, a couple of mice or voles, Douglas squirrels, and birds. Thankfully, the cooler temperatures meant that bugs were almost non-existent, the exception being the afternoon we arrived at Paradise Creek which was pleasantly sunny and warm. The mosquitoes were definitely hungry when out! We saw and followed deer, bear, and wolf tracks along the trail. The bear prints were very fresh, as were several substantial (sometimes very substantial!) piles of green poop. At one point on our return we encountered a freshly ripped up log still crawling with panicked ants. We found wolf poop, and could see the bones of a small rodent in one pile. There was plenty of evidence of mountain goats at higher elevations (wool and prints) but we never saw any. Birds included white-crowned sparrows, unknown grouse, varied and hermit thrushes, possibly a golden eagle, nuthatches, chickadees, juncoes, Clark’s nutcrackers, Audubon’s warblers. 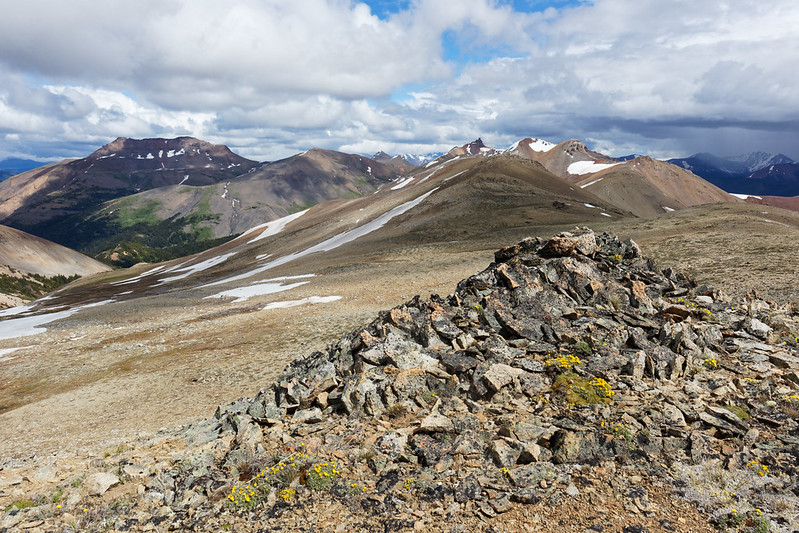 Summary
We wanted to explore a different area than last time, and we put together an out-and-back itinerary that looked like this:

Four of our seven days were spent on the move between camping areas, and one day was written off due to rain. Our two day-hike days were absolutely superb, and we explored the high ridges between valleys which, for the most part, offered excellent and easy hiking.

As before, I plan to write up each day separately, but we’ll see how long that takes! I’ve just reread my notes and the memory of that first post-hike beer came right back… (Turns out it took until October 2021 to finish them all!) 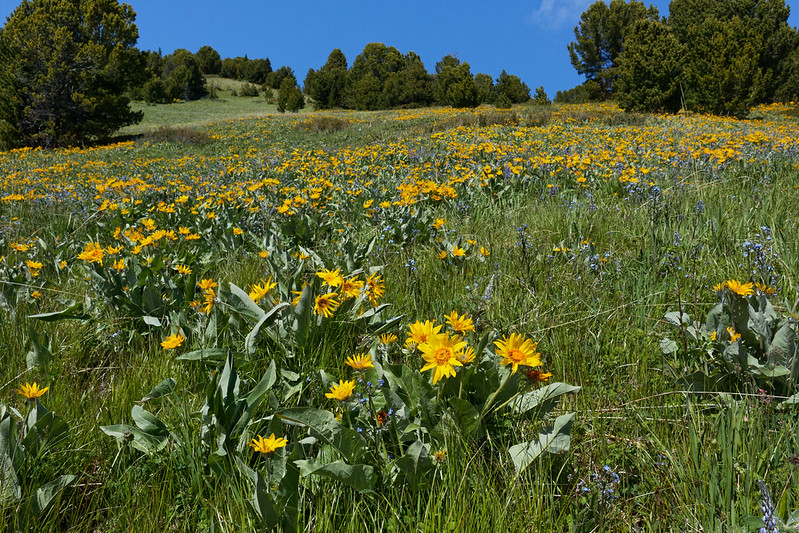