Opinion
Today confirmed why I enjoy this hike: superb views from the summit, plus a thoroughly enjoyable climb up Christmas Gully. The descent was crappy as usual, and made worse by all the ice, but somehow it didn’t bother me too much today.

Fact
Sunny weather brings out the hikers! The uppermost parking lots were full, though the vast majority of people seemed to either venture only as far as Bowen Lookout or join the conga line to St Marks Summit. (At least that’s how it seemed to us.)

We hiked the loop clockwise, just like last year. The trail to Strachan Meadows was in great shape and easy to hike. The route up Christmas Gully was very icy in places and, although it was possible to avoid most of the ice, it was tricky in places, especially near the top where we put on our microspikes. Even then, where the ice was steep, the microspikes were not a magic solution as they don’t penetrate really hard ice. So, choose your footing carefully.

Likewise, the short ascent to the south summit was very icy. However, it was quite easy to avoid most of it and stick to bare rock. While there were many places with paths worn into the heather at the edge of the rocks or wet areas, those were just as slippery as the ice because they, too, were frozen solid and it was not possible to gain any traction on the surface.

Descending from the south summit was the usual array of slick roots and rocks with a few big, awkward steps. Add to that lots of ice and slick frozen ground. In the meadows below the Strachan-Hollyburn col, the trail had numerous patches of muddy water, occasionally covered with a layer of unsupportive ice. At lower elevations, the roots were often a bit of a hazard. All in all, a very slippery experience. Thankfully, I think we only fell once each.

While busy at the summit, the trail was delightfully quiet as most hikers inexplicably chose to hike up and/or down the ski runs. Not recommended, and especially now as the ski resort is running the snow cannons to create the first layer of snow. The trail to St Marks looked extremely busy!

Wildlife was limited to a few birds: ravens, whisky jacks, and a pair of soaring eagles above the south summit. 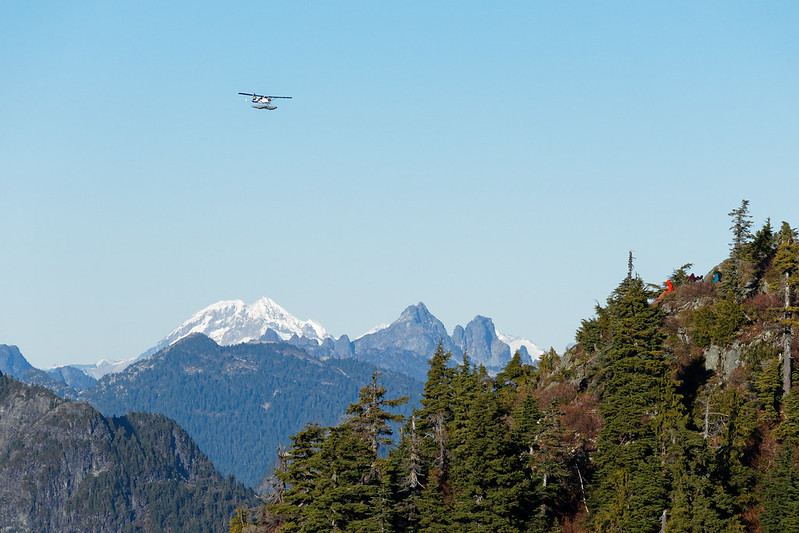