Opinion
A superlative destination with a long but relatively easy hike in and out. The new campground at the Ponds is superb with unobstructed views of Mount Garibaldi and is now one of my favourite camping spots of all time! A three-day trip is the perfect amount of time to enjoy this area.

Fact
We arrived just before 9 am and the parking lot was already mostly full (on a Thursday!). BC Parks staff were on hand to check day-pass and overnight reservations so don’t forget to bring it with you. Cell service is not reliable at the trailhead so download a copy to your phone or print it out.

The trail to Elfin Lakes was as good as ever, allowing for speedy travel. The hikers’ trail from Red Heather had some slick, muddy spots (which one poor descending backpacker fell foul of) but was otherwise fine to walk. With the exception of those muddy spots, the upgraded trail seems to be bedding in quite nicely. Beyond Elfin Lakes, the trail was again in good condition with the exception of a few washouts. The first two were easy to negotiate but the third (which was terrifying to cross in the aftermath of a severe storm in 2013) required more care as it was full of loose boulders. Also that gully still looked like a bowling alley for any rocks falling from above so I wouldn’t linger.

The last few steps leading down to the bridge over Ring Creek have seen significant erosion since our last visit in 2013. Given how crumbly that slope is, it seems likely that this part of the trail will suffer the same fate as the old trail, eroding to a narrow goat track with the risk of boulders falling from above. It was okay on our trip but could easily get worse in a short time. Thankfully the expanded bridge over Ring Creek was intact and sturdy. The same can’t be said for the posts holding the guard rope – one of them was very loose so do not be tempted to lean on them when on the bridge!

On the east bank of Ring Creek, the trail was mostly good and easy walking with a couple of small runoff channels to cross. There was one large washout/gully to cross that was severely eroded and required considerable care to get through, especially with overnight packs. It was over 2 metres deep, with sheer sides, and lined with loose rocks embedded in the dirt, some big enough to do serious damage. We followed a line of cairns up the slope until we could cross reasonably safely. After that the trail was fine up to Opal Cone and onto the flats beyond. Once into the Zig-Zag Creek valley, there was another deep gully to cross which was actually trickier to cross as the slope was steeper. Again, beyond that, the trail was in good condition all the way to the Rampart Ponds campground. The bridge over Zig Zag Creek was solid.

The campground is in a stunning location near the pass above Mamquam Lake with a clear view of Mount Garibaldi immediately to the west. It has 12 dirt/gravel tent pads, a composting outhouse (though without a liftable seat) whose door was propped up against the outside wall, and metal food lockers. There are no trees for shelter so it would be very exposed in bad weather. Also there was no designated eating area, which I fear just tempts people to eat by their tents (and we saw other campers do that). We ate on a flat(ish) rocky area just south of the food lockers. Another good place to eat would be up the trail to the pass. The Rampart Ponds themselves are quite shallow with silty bottoms, but were fine as a water source.

On our second (middle) day we explored the ridges to the north of the campground. There were no trails to follow so we had to read the landscape to find the best route. We found heading up a creek-bed was the most efficient way to gain the ridge. Once on top, we followed it north, descending to two tarns to then climb up to the east ridge. One short, steep section of rocks required a little bit of scrambling but the rest was just straightforward off-trail hiking. However – watch your step as the heather contained a miriad small flowers that were easily overlooked and would be easy to step on accidentally. A GPS track was really handy for retracing our steps as there were some steep slopes to avoid. The views from this ridge were awesome, revealing glimpses of some of the wilder portions of the park.

Flowers were still remarkably abundant with some superb displays of arnica, pink monkeyflower, broad-leaved willowherb, and red paintbrush. Other flowers included lupine, yellow monkeyflower, pearly everlasting, fireweed (rosebay willowherb), purple mountain daisies, Sitka valerian, leatherleaf saxifrage, Tolmie’s saxifrage, bird’s beak lousewort, sweet coltsfoot, white heather, yellow heather, white bog orchid, kalmia, edible thistle, fringed grass-of-Parnassus, and a new one for us: silverback luina. There were undoubtedly others that I’ve since forgotten. Blueberries were abundant in places, though not as tasty as the ones on the way to Tenquille Lake a few days earlier.

Wildlife sightings were few but memorable. We saw a black bear way down in the meadows below the Elfin Lakes trail near its high point (other groups warned us of bears near the Gargoyles junction on our return but we saw nothing). Near Opal Cone we saw a marmot whistling from a large rock. At the campground, ravens flew by one morning calling to one another. Mosquitoes were occasionally annoying but mostly not an issue. 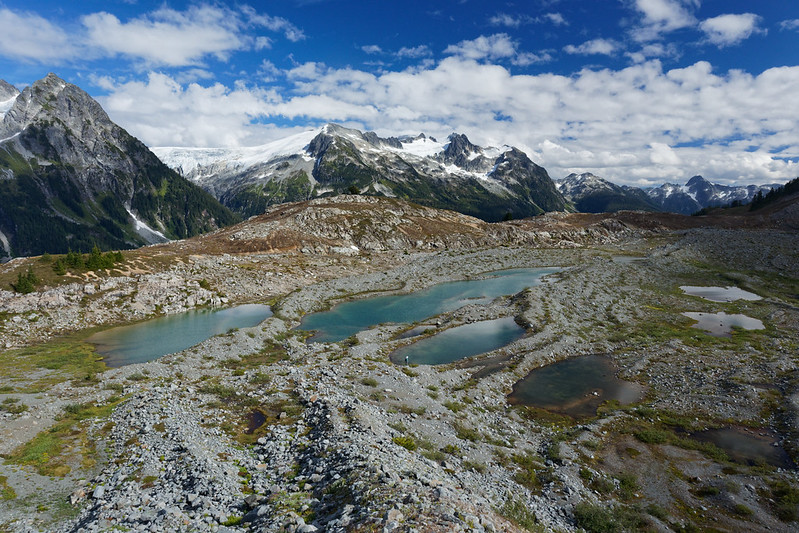