Opinion
With the most time above the trees, Mount Seymour is simply the best of the North Shore mountains in winter, especially on a bluebird day like today. The price is, of course, popularity so getting a parking spot requires a very early start, and when the conditions are right, venturing beyond Pump Peak to Tim Jones Peak is a good way to lose most of the crowds.

Fact
As I’ve mentioned before, the only way to get a parking spot for accessing the Mount Seymour backcountry is to arrive as early as possible. We turned up at 7:45 am and pulled into a mostly empty overflow lot. The roadside parking was already full.

A wide groomed path led from the lower parking all the way to the trailhead, and was hard-packed snow, slightly icy in the morning but churned up to sugar by the middle of the day.

The trail was marked all the way to Pump Peak. It looked like it had been widened with a groomer too, most of the way to Brockton Point. Snowshoes were not necessary as the snow was hard-packed (and quite icy in places) with only a thin layer of churned up snow on top. Microspikes or similar were invaluable, especially on steeper sections and the descent, and the firm snow made hiking easy. Boots with good grip would probably get you up without too much trouble but the descent would be much trickier. As ever, several sections of the trail have been turned into miniature butt-canyons from people sliding. Most were easy to avoid, thanks to the aforementioned groomer, but a few on particularly steep sections made life quite tricky, especially for snowshoers and skiers. Please slide off trail if possible!

Beyond Pump Peak, there were no markers but the route to Tim Jones Peak was obvious, and safe given the stable snowpack and low avalanche danger today. Although some had attempted it, I would not recommend going beyond as the terrain gets very steep and unforgiving of any mishaps (two snowshoers had to be rescued last weekend as they got stuck in this area). It’s the domain of experienced mountaineers with crampons and ice axes only.

We noticed an injured hiker on our way up who was still there on our descent. We checked in with him to see if he needed anything (there was a group of people tending to him as we walked past earlier) and he said he was fine. A couple of minutes later, a helicopter with a North Shore Rescue team showed up. The point here is that even on a busy, popular trail, it can still take over two hours for a rescue team to reach an injured person. That’s a really long time to sit on the snow (or any surface really) so be sure to bring a hot drink, warm layers, and something insulated to sit or lie on.

Wildlife was sparse: a few whisky jacks near the usual congregation points along the trail, while ravens seemed content to hang around the parking lot. 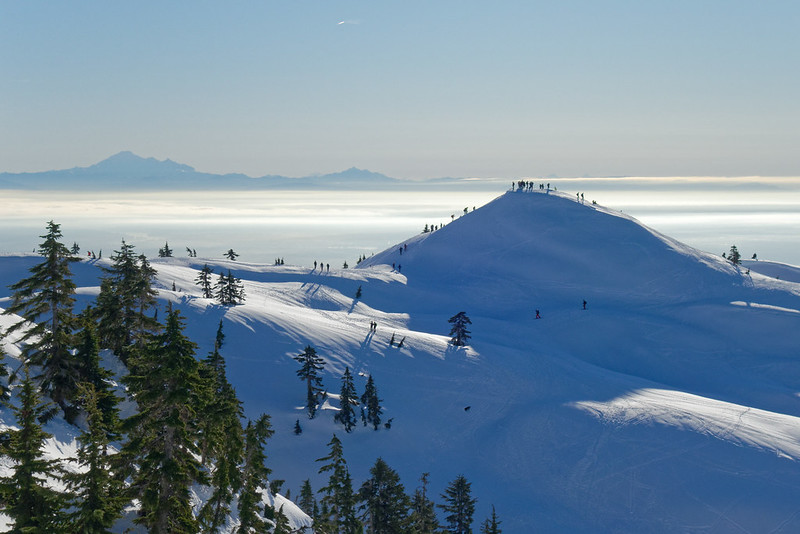