September is often an excellent hiking month. Cooler temperatures, no annoying insects and clear blue skies make for some of the best hiking of the year. Our friend Brenda was back in Vancouver for a short time having moved back to Ottawa a few months earlier, and was looking to get out in the mountains. After some discussion we opted for Brandywine Meadows, with the possibility of continuing on up to Brandywine Mountain itself. Merewyn couldn’t make it, so it was us, Brenda and Andrew. 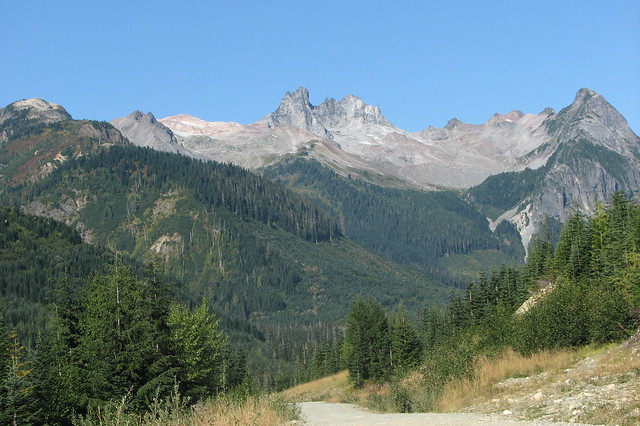 A sunny day dawned and we piled into the car and headed up towards Whistler. We turned off onto the Brandywine Forest Service Road, following the new route in thanks to the upgraded Callaghan Valley road. Andrew guided us the first couple of turns (although it was obvious which way to go) and soon we were back on the road I remembered driving three years previously. We rounded a corner and the spiky remnant of Mt Fee greeted us. It halted us in our tracks and we paused for a photo-op.

I was confident we’d get up to the parking lot at the trailhead, but when we reached the last hill we noticed a few cars parked below. We paused to chat to one group getting ready and they said they couldn’t get up the hill. Well, having done it before I was sure it could be done again. Except that three winters of rain and snow coupled with the spinning wheels of previous cars meant that the hill was cratered and cobbly. We got about 10 feet up the road before we came to a total halt, tyres caught on some rocks. Despite my best efforts, we were going nowhere so (with some difficulty) I turned the car round and parked in a small pullout.

We set off up the hill (which was actually quite steep) and after about 10 minutes reached the trailhead proper. We stopped long enough to use the facilities before heading into the trees. The trail is another one of those no-nonsense Coast Mountains trails: into the trees and straight up the slope. We picked our way up the steep terrain, through a few muddy parts and deciding to crawl under one particularly large area of blowdown. The creek to our left kept us company and provided a few nice opportunities to view its cascades.

Up and (yes) more up followed. Eventually (having taken much longer than I remembered) the trail began to level off as we approached the edge of a clearcut and we came to our next batch of mud. Even though we’d had a dry summer this mud was still boot-suckingly deep and just waiting for us to slip off one of the helpful logs laid down to guide hikers over the worst parts.

We made it over the boggy bits and found ourselves hauling up another steep slope to the beginning of the meadows. But once in the meadows we encountered our first batches of ripe berries and we slowed right down. The next couple of hundred metres were hiked at a very slow pace as we picked our way from one laden bush to the next, savouring the juicy ripe blueberries and huckleberries. Remarkably, we saw no sign of bear activity, always keeping in mind the story we’d read from two years ago when a couple of hikers had a very close encounter with a feeding grizzly. 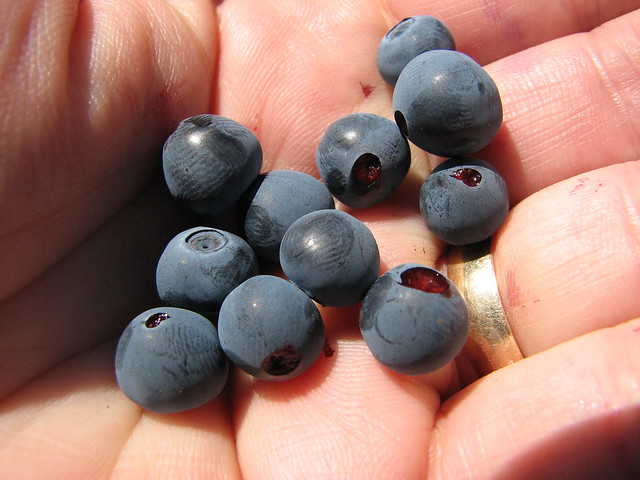 But then we were at the meadows and our elevation gain was over for now. We gawped at the scene before us: the meandering creek cradled in a small valley terminating at the headwall of Brandywine Mountain. We paused at the creek for a snack and (in Maria’s case) a stretch. Moving on, we followed the creek, traipsing through more boggy sections and admiring the golds and yellows of autumn. The broad-leaved willowherb had all gone to seed and so what we’d seen as a carpet of pink and purple at Wedgemount Lake was now a bed of fluff
and seed tufts.

Looking back at our way across the meadows, the view was dominated by Black Tusk and, in some places, by Mt Garibaldi too. I’d seen this before, but it was Maria’s first trip here so this was a new angle on a familiar landmark for her. Further up the valley, the creek was flowing fast and we couldn’t cross in the usual place. We explored the bank and about 50 metres further up, we found a few well-placed rocks to get us over. We rejoined the trail and began ascending again up through the upper meadows, passing more low-lying berry patches and
willowherb fluff. 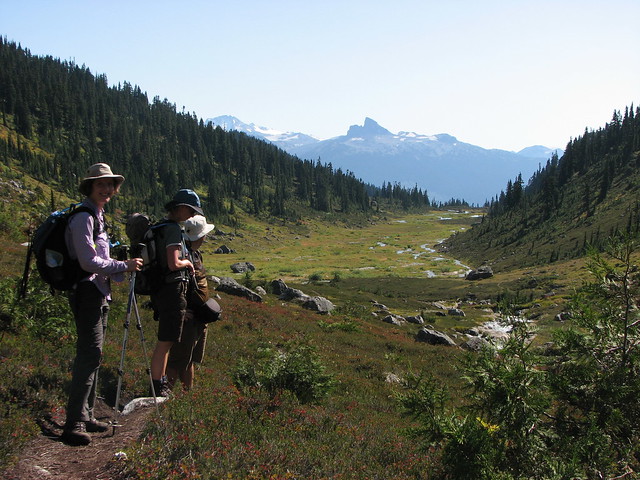 Eventually the trail ran out and we stopped to identify a suitable route up for the approach to Brandywine Mountain. The group Andrew had been with a few weeks previously had taken a (very) wrong turn so he was keen to try out the correct route. Initially our progress was easy as we crossed more small creeks and began picking our way up a boulder field. But we soon began to slow down and I was aiming for closer and closer landmarks. We reached a small plateau and regrouped briefly. We were taking a very long time and for the first time I wondered if we’d make the summit today.

We pushed on, but before long Brenda opted to rest. The hot sunshine was taking its toll (there was absolutely no shade and it felt more like July or August), so she decided to find somewhere comfortable and shady. The rest of us carried on as the trail got steeper, first over large boulders which soon gave way to small, loose scree. We hauled ourselves painfully upwards, aiming for the ridgeline. After what seemed like an age, we crested the ridge and as ever it was all worthwhile. Beautiful views greeted us, and we admired the next valley over. Black Tusk and Garibaldi and Castle Towers dominated the skyline to our east. In front of us was the fantastically-spiky Mt Fee, and we could see Tricouni and the Tantalus Range beyond. Looking west were more amazing sights. There was the similarly-spiky Pyroclastic Peak and the colourful Mt Cayley, and more unnamed peaks beyond. 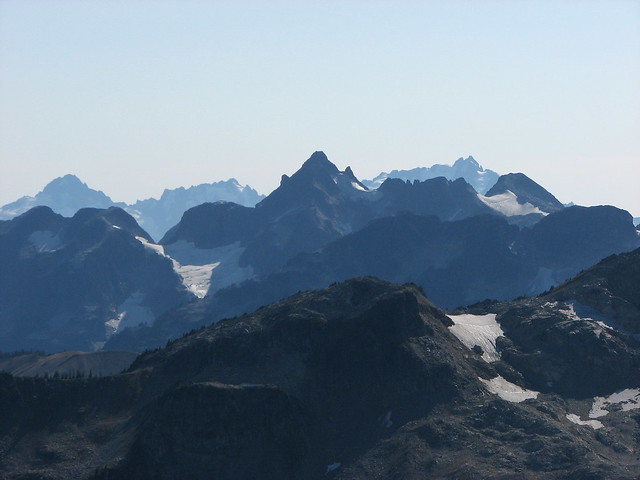 This would make a fine lunch spot, and so at 3.15pm we sat and had a very late lunch. It was now clear that we wouldn’t make the summit today, but curiosity got the better of us and so after lunch we scrambled up the slope behind us to the end of the summit ridge. More fantastic views greeted us, now down into Brandywine Meadows itself. Maria decided this was good enough for her and found a good spot to stretch and admire the view. I couldn’t resist going on to the next bump, just to see how much further it might be.

Andrew joined me, and we reached it within a couple of minutes. From here we dropped down onto the snowfield at the top of the Brandywine glacier. And so for the second time in as many weeks, I found myself standing on a glacier. Woohoo! The surface layers had melted in the sun and we found ourselves on wet, slushy snow. We made our way up the slope of the glacier to where it began its downward plunge, stopping to admire a couple of nearby crevasses. Despite how scary this sounds, we were perfectly safe, the snow providing plenty of grip. We took in the view again, noting that we could see the Wedgemount Lake area we’d been exploring a fortnight earlier. 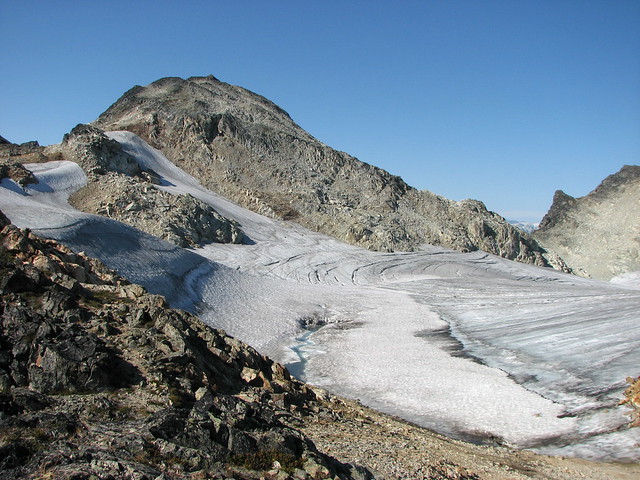 We made our way back to dry land, pausing long enough to examine a couple of meltwater sink-holes in the glacier. In several places it looked like someone (or something…) had bored perfectly circular holes into the snow and ice. We peered into them but they were totally dark. Well we didn’t really want to get too close to such holes so we were content to admire them from a distance, taking a photo or two.

Time was ticking so we started back to rejoin Maria. I filled up one of my sandwich bags with slush from the glacier and took it with me so Maria could ice her muscles (two weeks ago she’d been able to lie on the Wedgemount glacier). Our descent was wall-to-wall views, with most of Garibaldi Provincial Park laid out before us: Wedgemount in the north, Whistler and the Musical Bumps, Cheakamus Lake, Black Tusk and Castle Towers and the Garibaldi massif itself. Spectacular. 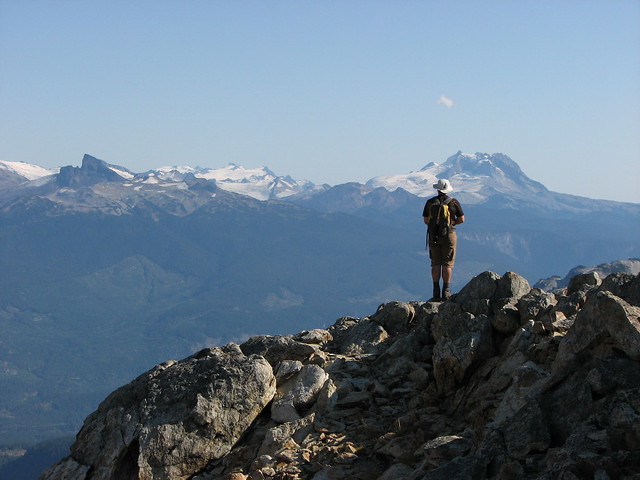 We returned to our lunch spot, where we met another group which seemed to include Charlie’s Angels… Then down the scree to meet up with Brenda again. We convinced her to go up to the ridge for the views, which she was happy to do now that she’d had a snooze! Yes, we were right: it was definitely worth it, she said. Our descent was slow and it seemed to take a long time to regain the meadows. We retraced our steps and stopped for a rest at the creek, the same place we’d paused when we first reached the meadows.

Andrew found some deep water in the creek and managed to go for a refreshing swim. The rest of us were content to cool our feet and faces. Then it really was time to make our move back to the car. We scooted back through the berry patch, though we could not resist stopping for another feast along the way. Here we noticed even better views of Garibaldi, and could even see the Barrier. Within a few minutes we found ourselves walking through a patch of tall fluffy fireweed. I stopped and asked if anyone else thought it seemed unfamiliar. Sure enough, no one else remembered it so we back-tracked a little to find the trail we’d come up on. It was a tiny intersection marked by a stray piece of flagging tape which we simply strode right past.

OK now we were on the right track! We descended through the woods, over the muddy sections (where Brenda wiped out – twice – much to her disgust), down again to the blowdown section, where we opted to go over rather than under. This promptly spawned a series of over/under jokes that lasted for much of the next 20 minutes…. 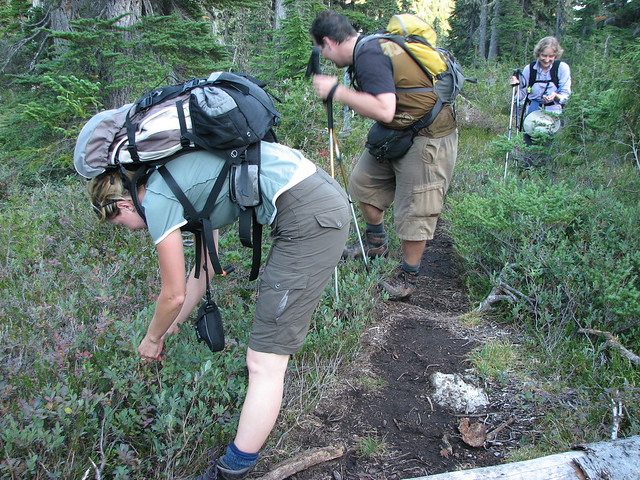 We were determined not to get caught out again hiking after dark so we sped down the last section, reaching the trailhead a mere 5 minutes after sunset :-) Then it was just a 5-minute yomp down the logging road back to the car and home via Tim Horton’s in Squamish.

We may not have made it to the summit of Brandywine Mountain, but we still had a fabulous day in the mountains. Next time we’ll get there for sure!

Distance: about 10 km
Elevation gain: about 1000 m
Photos on Flickr