We came round just after dawn. Something wasn’t right: it was too quiet… The rain had stopped! And we were dry, just a little condensation on the inside of the tent. Woohoo! A bit of sun shone on the tent and we laid there listening to the water dripping from the trees.

Then, clunk! Not just water, something else was dripping off the trees. Something hit the car. Once we were up we realized it was a Douglas fir squirrel (noisy, scolding squirrels) in the tree above, gnawing off the fir cones and collecting them up at ground level. Breakfast was leisurely as the sun rose further and caused the trees and bushes to steam. We laid out our stuff to dry off and eventually took a wander down to the beach with our lunch and books. 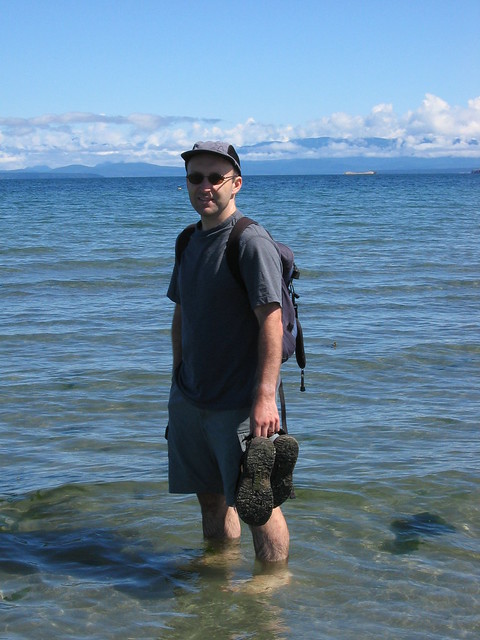 It was a 10 minute walk to the beach and when we got there we just stood for a few minutes looking out to sea. The tide was out but seemed to be on its way back in. Remarkably the beach was almost empty — Miracle Beach is supposed to get crowded in the summer. Maybe it was because it was a Wednesday. We walked out on to the sand, through warm shallow pools and down to the water’s edge. Aaaaahhhh! That’s better! We followed the beach northwards until we reached a rocky patch, where we turned round and headed back the way we came. As we walked back through some more pools, we spied living sand dollars — we don’t get these in Britain, so it was a novelty to see them. Sand dollars are round flat shellfish, related to sea urchins, which burrow into the sand. Their shells are covered in thousands of tiny black spines which help them move through the sand. We were so captivated we didn’t get round to taking a picture of any of them. The pools were also full of really colourful shore crabs, which we did manage to get photos of. 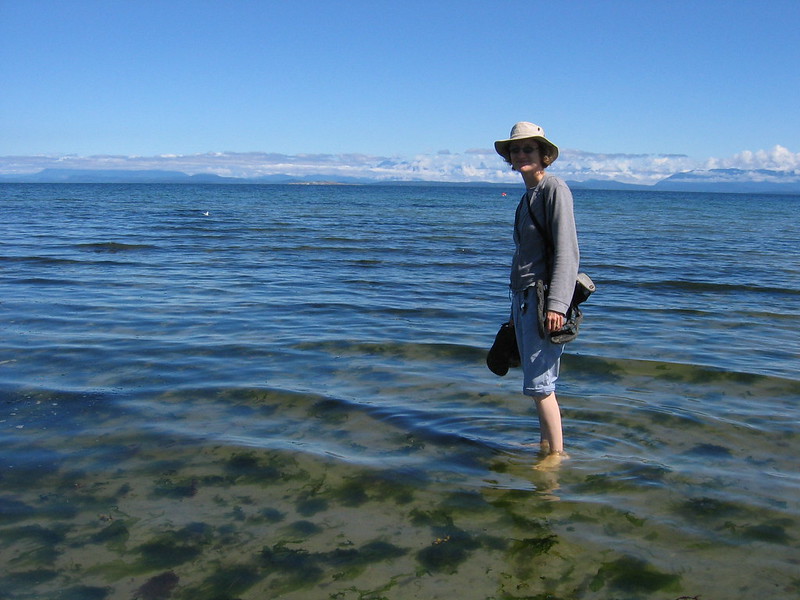 We headed back up the beach for lunch at a warm picnic bench, only to be bugged by the inevitable wasps. They weren’t too much of a nuisance, but the folks at the next table certainly made a meal of it every time one buzzed within about 6 feet of them. We sat back and read for a while after lunch, content to sit and watch the tide come in. Once the tide was in far enough to swim, we went back to the tent to grab our swimming gear and returned for a swim. Brrr. It was chillier than expected but not too bad for a short while. I grabbed my face-mask and snorkel and went chasing fish in the shallows. After drying off and changing back into dry clothes we returned to our spot on the beach and picked up our books again. By now we were thoroughly chilled out. This was what holidays are for.

Then dinner and a beer. It was a pleasure to cook in the dry, even if it quickly became cool once the sun had disappeared. Time for bed.