Another beautiful sunny morning saw us packing up our gear for the last time. From there we stopped at the Mount Robson cafe for breakfast (our first coffee in several days!) and more gawping at the mountain. Since it was fairly early in the day we figured we had enough time to do a little more sightseeing before getting on the road home.

We headed west on Hwy 16 towards Moose Lake (and Jasper) looking for moose. Well that was a waste of time. All we succeeded in doing was annoying a truck driver as I slowed alongside the road looking for a place to turn around. Ah well. Back the way we came then (it was so tempting to continue towards Jasper…) and to Overlander Falls. These falls are named for an expedition in the 1800s (the Overlanders) who sought to explore the Rockies and find somewhere to settle. They are important because they mark the furthest point upstream on the Fraser River that salmon can swim as the falls are too sheer (even though they’re not very high) for the salmon to leap. Anyway, it’s a pleasant 10 minute hike down to the falls, and they’re a nice little set of falls. It’s also really nice to see the Fraser looking so clear and un-muddy. 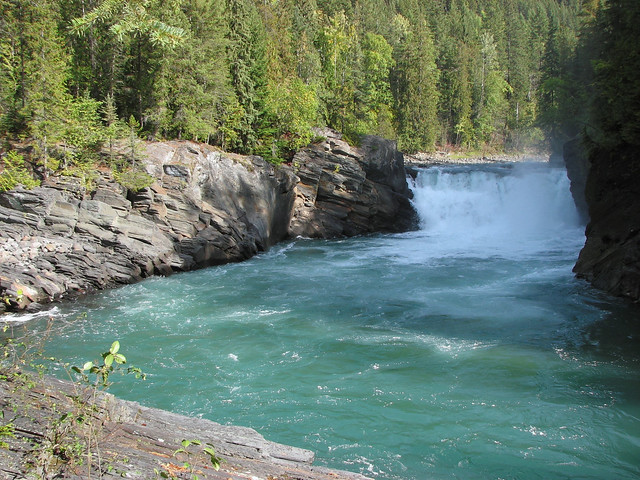 We pulled back onto the road, whizzed by Mount Robson for the last time and headed for the next set of waterfalls on the Fraser, Rearguard Falls. Another short hike downhill to the river and another nice set of waterfalls. These falls are more impressive than Overlander, if mostly because it’s possible to get really close and get a sense of the power of the water. It would be fun to spot salmon making their way up over the cataracts too, but not today. However, we were treated to the sight of a whitewater rafting trip putting in by the falls and then floating off downstream. Looked like fun – maybe next time. 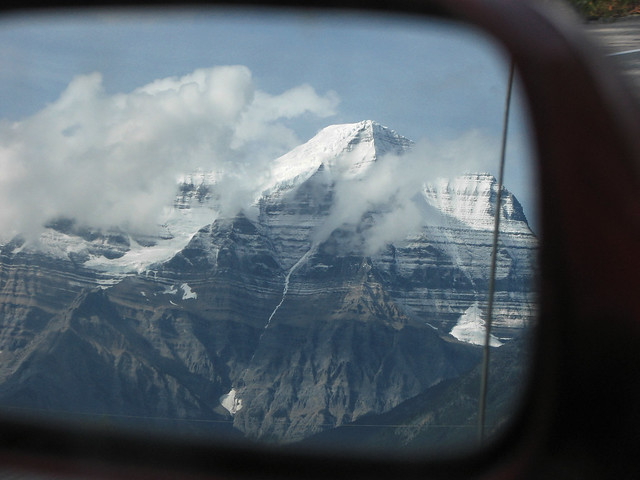 And so with the rafters departing, it finally felt like the right time for us to set our sights for home. We stopped at the Swiss bakery/cafe in Valemount again for more life-giving streudel and special coffee :-) before hitting the road for good. The scenery rolled by as we followed the Thompson River south. RVs and trucks were passed at varying speeds. At one point we passed a slew of cars pulled over by a railway bridge, and I almost stopped (to watch a bear on the railway line) but for some reason I didn’t. And then I wished I had stopped because I always like seeing bears. Anyhoo, a few miles later I was a little too slow recognizing the car coming towards us and that is the story of how I got my very first speeding ticket. Ever. Phooey.

So the rest of the drive was pretty boring after that. We stopped in Clearwater for a makeshift late lunch/dinner (pretty crappy too) before making our way down to Kamloops for an emergency coffee and washroom stop. I’m ashamed to say it was a Starbucks that received our custom, but at least they had the decency to serve me the best coffee I’ve ever had from a Starbucks. Then it was back onto the Coquihalla Highway, through the toll booth and the final stretch through the Fraser Valley. Remarkably we were home by 9 pm. The car was emptied, and everything dumped in a big pile in the living room. Another excellent trip had ended with us desperate to go back and do it again.