An even warmer night than before, but a restless one for me. The river, normally so soothing at night, was just too loud and it kept bringing me round. Apparently I was the only one with that problem though, as everyone said they slept well. We ate breakfast and packed away our gear, and Christian persuaded us to go explore upstream. A narrow trail led away from the campground and soon entered a series of massive boulders at the foot of the Devil’s Staircase. We picked our way over these, following pink flagging tape, and within about 15 minutes we came to the base of another cliff where the river widened. At this time of year, the river remained in its main channel, though clearly at other times the river filled the area we were walking on.

We found more pictographs on this cliff, and explored further upstream to the point where one of the meltwater channels we had crossed yesterday entered the river (quite a spectacular chute) but could not find any more. Presumably this cliff was too sheer to approach. We headed back to the campground and hoisted our packs for the last time. Only 4 km to go – we should be done within an hour and a half. 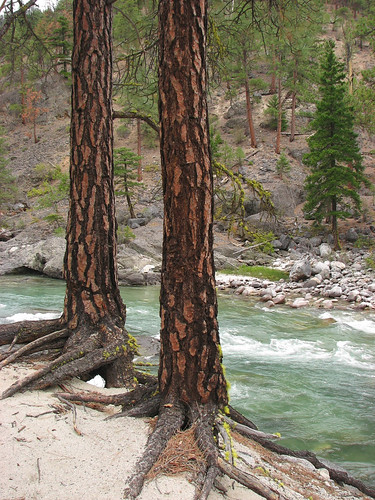 The trail was soft and easy going, the forest was open and our pace was relaxed and steady. The river ran on our left as we walked, but we were mostly up above it on benchland, old floodplain or river bed. Here and there the trail passed close to the river, including a nice flat rocky area (though I can imagine it being slippery in the wet). We passed many ponderosa pines and were stopped in our tracks by one in particular which had clearly been designated a memorial tree. Several wooden plaques had been attached to the tree, each talking of someone’s life and their importance to the local people. All featured intricate carving all had the park symbol at the top. I say park symbol, but that sounds wrong. It makes it sound like I am saying these were official in some way and something to do with the park authorities. Well, maybe that’s partly true since the Nlaka’pamux people are co-stewards of the park. Perhaps it’s more correct to say they all featured a representation of the pictograph which has become the park symbol. We stopped and read about these people, and I felt glad that this place was still a living wilderness not just some land fenced off (in a legal sense) and left alone.

Soon we came to the Asking Rock, which also featured pictographs, and paused to look and wonder what people came to ask here. The rock was festooned with trinkets and offerings. Maria had been carrying a lovely piece of ponderosa pine bark, just like a piece from a jigsaw. It didn’t seem right to walk away with it, so she left it there at the Asking Rock.

From here we crossed Stryen Creek (a valley which we intend to explore another time) and began to veer away from the river up a gentle incline. Within a matter of minutes the trail levelled off and we had reached the trailhead. We had finished. We spent some time taking pictures at the sign, including one last group photo. Christian fetched his car (now the only one in the parking lot) and we crammed our gear inside. 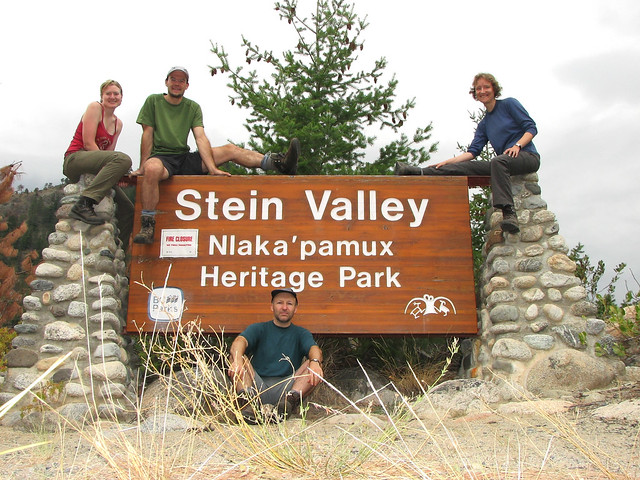 We drove back to the cable ferry, giving Merewyn and Maria their first glimpse of it in action, and after crossing the Fraser River we were on the road to Lillooet and back to Blowdown Pass. We stopped briefly in Lillooet to pick up something to eat at the German bakery (of all places!) and enjoyed the scenic drive back up through Cayush Canyon up to Blowdown Pass. We reached our car and I was relieved to see it was all still intact, just a little dirtier. The large metal culvert pipe which lay behind our car when I had parked a week ago, was now gone presumably now part of one of the new drainage culverts in place along the road. I was glad I had left plenty of room for manoeuvre!

We removed Christian’s bike from our car, transferred our packs to ours and agreed to meet up at the Pony Espresso in Pemberton for coffee. Christian had charged the mobile phone we had found on day 2 and rang the home number in the contacts, getting through to the owner immediately. They were pleased to hear about the phone (though perhaps disappointed we hadn’t brought the rest of the pack!) and told us the tale of how it came to be where we found it. Christian dropped it off with the owners in Mt Currie, on the way to Pemberton.

Coffee in hand, we met up for one last time before heading for home. Seven days ago we had started this trip. What a week!