After yesterday’s excursion to Wilcox Pass, we wanted to do something closer to home before we set out on the Skyline tomorrow. A quick discussion led us to opt for Indian Ridge as it was a highly-rated hike, plus it got us up into the alpine with little effort, thanks to the Jasper Tramway. On our last visit here with my parents, we had clear skies and could see the white spire of Mt Robson rising above every other nearby peak. Unfortunately today was cloudy and we had no such view.

Susanne went off and did her own thing (heading for the Miette hot springs) while the rest of us took the tramway up Whistlers Mountain. Stepping out of the building we were hit by the cold mountain air, which was still below freezing. Brrr! Still, we had some sunny breaks to take the edge off, and took advantage of the shelter provided by the summit station to admire the view of Jasper and the Athabasca River valley far below. 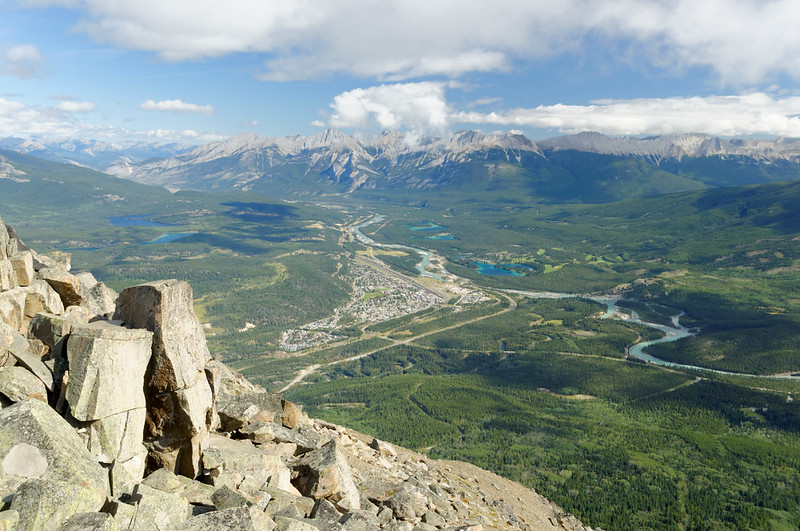 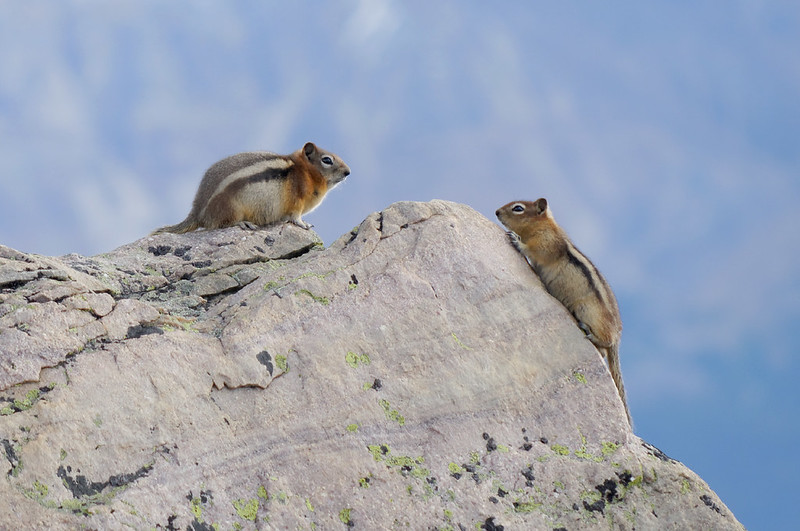 But we had a schedule to keep if we were to make it back in time for the last car down, and we set off up the hill towards Whistlers summit. It’s quite a steep climb to begin with, and I was huffing and puffing in no time, thanks to the altitude. However, it wasn’t too long before the slope levelled off as we took a side trail which looped around the south-eastern flank of the mountain. This gave us good views of the Athabasca valley, and we could trace the thin ribbon that marked the Icefields Parkway. The towering face of Mt Kerkeslin looked even more impressive.

We rejoined the main trail, passing a large rock adorned by a pair of golden-mantled ground squirrels, and made it to the summit cairn at Whistlers summit. With fine views all around, we spent a while taking them in and grabbing some photos. Cairns of all sizes littered the flat open summit area where previous visitors had decided that the main cairn wasn’t good enough for their rock. Of course, numerous inukshuks also dotted the landscape, many reduced to the “legs” and for all the world looking like the set of Spinal Tap’s “Stonehenge”. We hung out for what seemed like a long time before gathering our momentum once more and striking off for Indian Ridge. 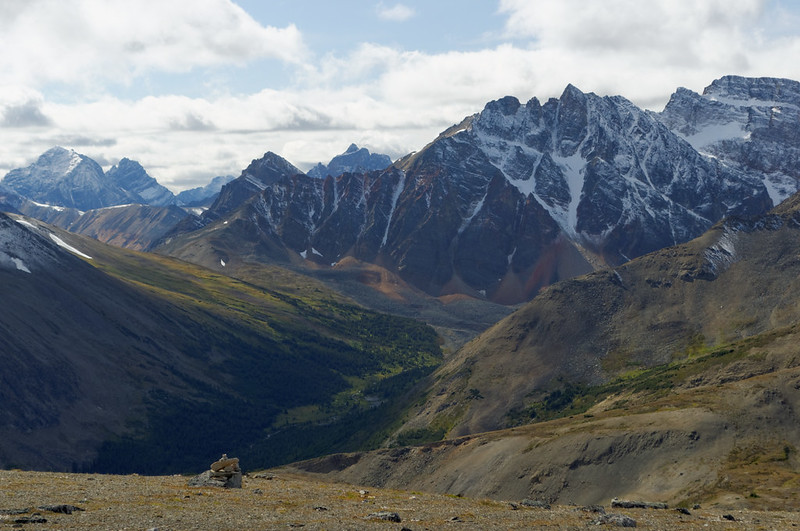 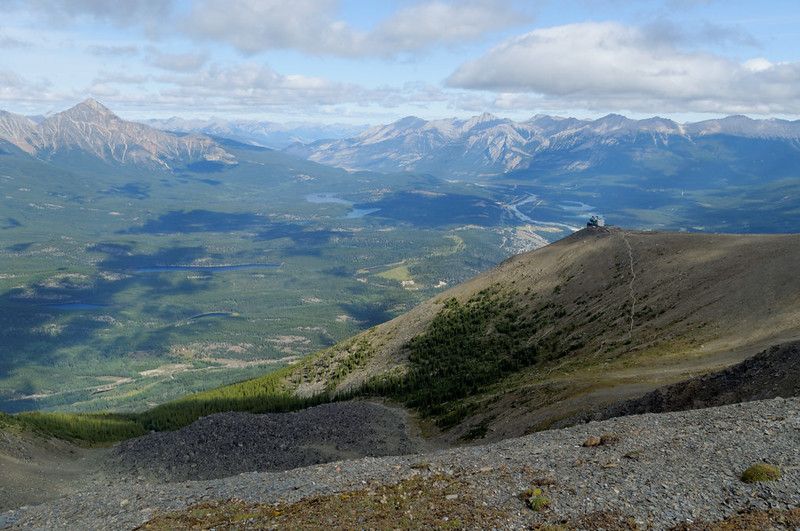 Initially, a trail led us towards a secondary bump on Whistlers, dipping down into a shallow col, at which point it ran out. We could see where we had to go, and took a sharp left turn to head down the slope into the Whistlers-Indian Ridge col. As in Wilcox Pass, the alpine flowers had long-since bloomed and gone to seed as we picked our way over endless mats of dryas. Reaching the col, we found a few fresh flowers – fleabane and asters – undoubtedly growing where snow patches had only recently melted.

Ahead of us we could see the trail making its way up the northern flank of the first bump. As ever, the foreshortening effect made it look much steeper than it really was. And yet, as we made our way up, both Jeremy and I found the long drop off to our right to be quite daunting, especially in the strong wind which threatened to bowl us over. I focussed on the trail ahead and kept moving upwards. The trailbed was compacted shards of shale which oozed mud if you lingered too long in one place. This made the trail surprisingly slippery in places, and like quicksand in others. I found that having a hiking pole made a big difference to how secure I felt: Jeremy and Gabriela were less sure, having left theirs in the car. 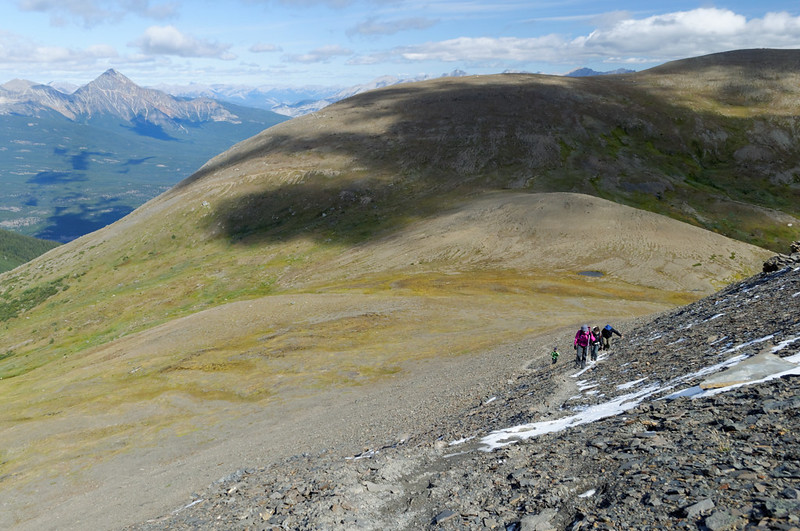 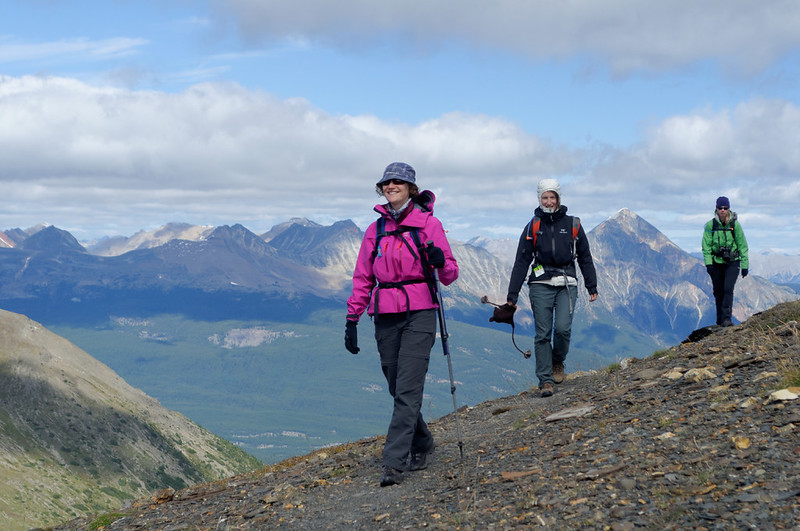 We reached the dip between the first and second bumps without incident, though, and paused for a lunch break. Having left civilization behind, we needed somewhere to pee, and found that up here in the alpine, there is no cover. There were no large rocks, no trees, no dips in the ground to hide in. Hmmm. All we could do was walk around the bump until we were out of sight of the rest of the group, which was mostly fine apart from the fact that we were still in full view of anyone further up the ridge… Ah well, if we made their day, then they must lead dull lives!

Our lunch spot consisted of a flaky outcrop of shale that formed a small wall, just the right height to sit on. We had sunshine on our backs, a little shelter from the wind and food. Life was good.

But we had that schedule to keep, and as soon as we were finished eating we moved on. Jeremy and Gabriela didn’t fancy going on up even steeper slopes without their trekking poles, and opted to explore the first bump a bit more and take a steady walk back to the tramway station. Brenda, Maria and I set off up the intimidating slope in front of us, as usual finding that it was nowhere near as steep as it looked. Even where it was steep, there was an obvious and safe trail to follow. 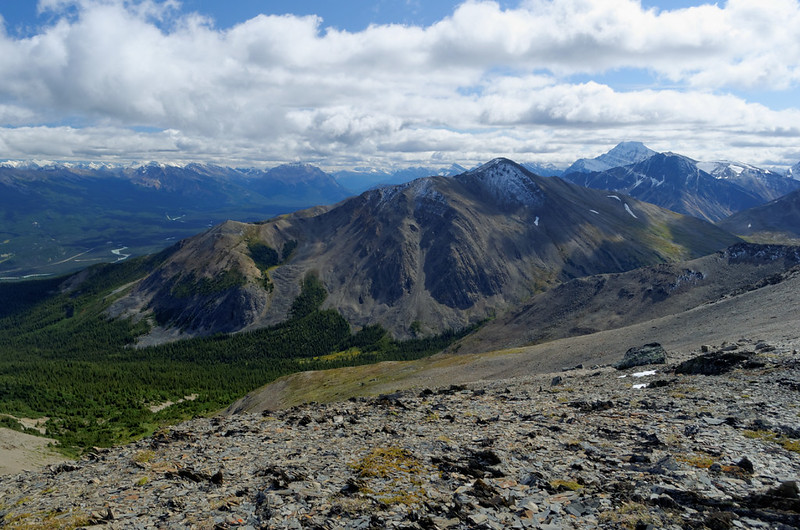 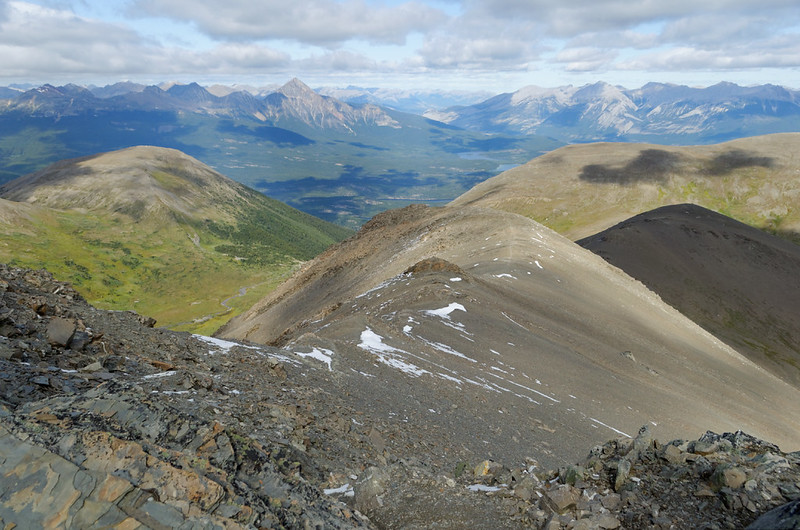 We soon made it to the second bump, paused briefly to admire the even more expansive view, and continued on uphill to the third bump. Here the trail did get a bit steeper, and we had to pick our way carefully through one of those flaky shale outcrops, complete with shaley-quicksand (quickshale?) and patches of snow. But, really, it was fine – with our good boots, and experience of hiking many trails, we had no problems at all.

Between the second and third bumps, I noticed hoof-prints in the ground which led to a snow patch with more. I think they were mountain goat prints, and I searched the snowy northern slopes in vain for any sighting of a white furry goat. No luck. One more push and we reached the third bump at our turnaround time. We had great views from here and really wanted to push on to bump four but we had to head back. We estimated that it would have been another 15 minutes or so to get there, plus time to get back – time we didn’t think we had. I climbed a little higher, staying long enough to take more photos and attempt a large panorama before hurrying down the slope to catch up with Maria and Brenda. 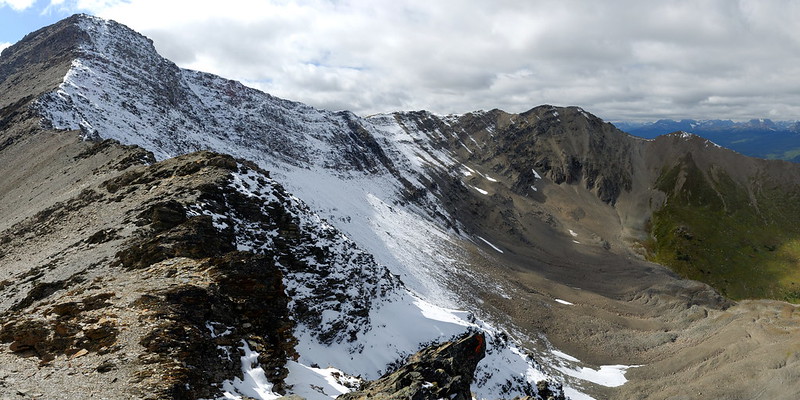 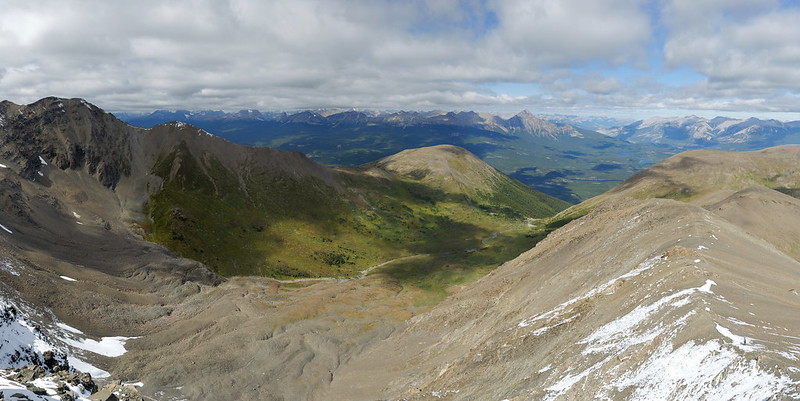 As it turned out, we could have gone on a bit further. Our descent was very rapid on the soft ground and it seemed like no time at all before we were climbing up through the dryas once more towards the summit of Whistlers. We passed the array of cairns and followed the steep trail back down to the summit station in plenty of time for the last tram.

Next time we’d like to do the entire horseshoe around the ridge, but there’s no doubt we’ll have to move really fast to achieve that. Maybe in midsummer when the last tram is at 8 in the evening.

Once we were back at the car, the sun had come out once again. We took advantage of the space of the parking lot and spent some time organizing and packing our gear for the Skyline trip in the morning. That done, we headed back into town for beer and food at the Jasper brewpub.