Another day, another sunny breakfast on the beach. Reluctantly we broke camp, running to Island Time of course, and re-crammed everything into the car before heading off somewhere else new. We end up at Bluffs Park with spectacular south and west views over the entrance to Active Pass, the channel between Galiano and Mayne Islands. We parked the car in the last bit of shade and went for a wander to case out a suitable lunch spot. 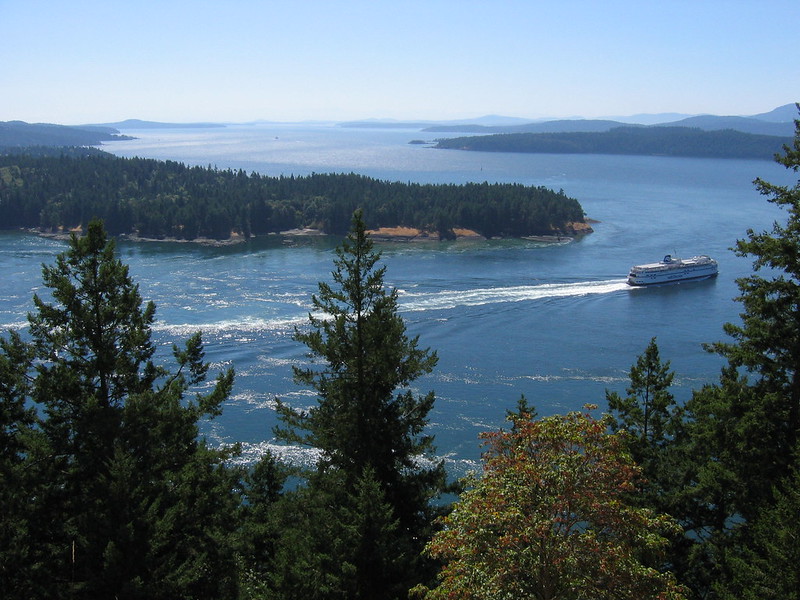 The sun was hot and the ridge was dry. We found an old shelter which overlooks the water but it was too nice a day to sit inside it so we sat in the shade of a young cedar. Yet another fabulous view on which to feast our eyes. For the better part of a couple of hours we sat back and watched the world go by. OK, in reality just a handful of people, a couple of bald eagles and a multitude of ferries making their way back and forth through the pass.

The tide was still quite low and we spotted a small islet which looked like it was covered with logs. Except these logs occasionally flopped around a bit and took to the water. A well-populated harbour seal haul-out: we lost count around 30.

Since we hadn’t yet seen all of the island we finally decided to move on a couple of miles down the road to Matthews Point Park. A 20-minute walk ended in a steep descent (complete with ropes) down to a secluded pebbly beach in Active Pass. There was even a beached whale. Or was it a large naked sunbather? We weren’t too keen on investigating further so we walked off in the opposite direction. This wasn’t a swimming beach: the currents in Active Pass are just too strong. Here again we made ourselves comfortable and watched yet more ferries tootle back and forth. More bald eagles too – or were they the same ones as earlier? The odd seal or two poked its inquisitive nose above the water. 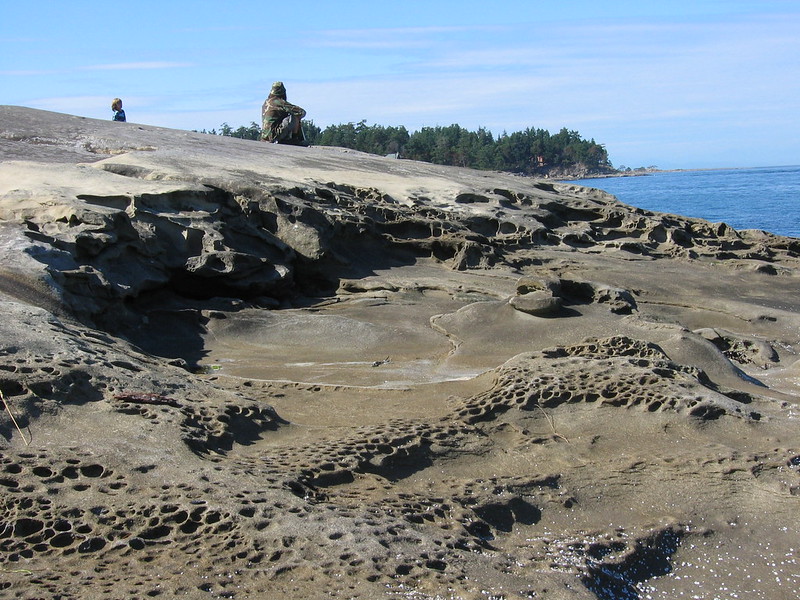 Well, pebbly beaches aren’t that comfy to sit on for very long, and it was now time for a caffeine injection. Suitably caffeinated, our next stop was Bellhouse Park on the point overlooking the ferry terminal. We explored the shoreline, admiring the weathered sandstone formations on the way. A couple of old men were stood competing with the seals for fish. The seals occasionally surfaced among the swathes of bull kelp. As we headed back to the car Maria was stopped by a trio of elderly locals with the question “Is that a really Tilley hat?” Well, of course it is. But that wasn’t enough and Maria was forced to tell them everywhere her and her Tilley hat had been. OK it seemed like that, but I guess it was only a minute or two. :-)

Still running to Island Time, we lazily made our way to the island’s ice cream parlour. Two huge ice creams later (we were on holiday, after all) we fancied a swim, so we headed back to Montague Harbour. We found ourselves a vacant spot on the white shell beach and dipped our feet in the water. Within no more than a second, we decided that swimming was out of the question. The water was freezing! OK, now for plan B: just sit back and read some more. Except it was too hot in the sun, so I wandered off to look for a shady patch leaving Maria to soak up the hot sunshine on an almost empty beach. When I returned there was a small rubber dinghy beached right in front of our chairs. It turned out that a couple from one of the yachts moored offshore decided to come and look around the beach for a bit. Naturally, the only place to leave their boat was right in front of us. To be fair, that was the husband’s idea. His wife commented on his version of the D-Day landings: “All that empty beach to aim at and you pull up right in front of these people”. Turns out that they’d navigated their way up from Seattle. Somehow. 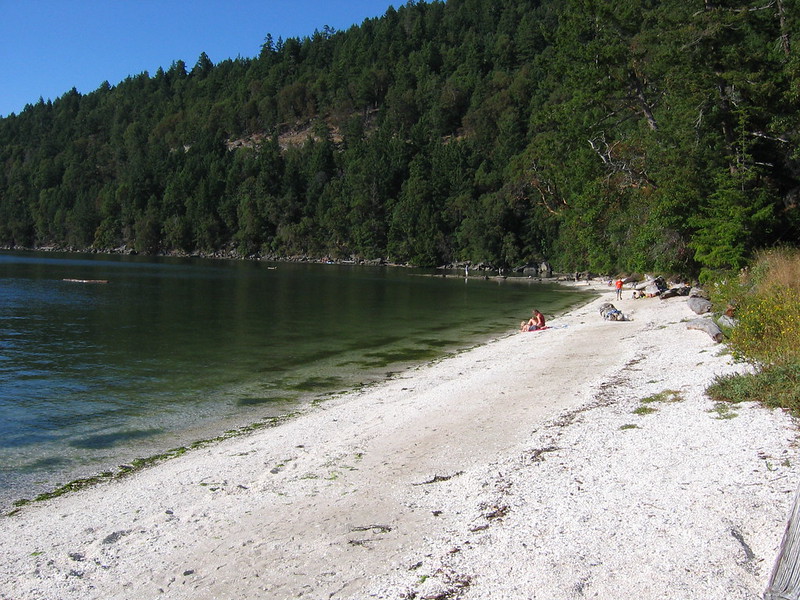 We found some shade under a lovely overhanging arbutus tree and sat down with our books for a little more peace and quiet. It didn’t last as long as we had hoped but what happened next was so bizarre we just couldn’t carry on reading. On our way to our shady spot we passed a group of four guys (they sounded eastern European) larking about on the beach, being a little noisy but perfectly ignorable. As we were sat they decided to turn up their radio, a little at first and then really loud. This prompted someone on one of the yachts to starting yelling at them to turn it down. Of course this didn’t work so he got into a dinghy and rowed over towards them, stopping about 20 yards off the beach. At this point he launched into a tirade against them and their music and informed them that unless they shut up he’d be forced to return to his yacht to collect his badge (“Don’t make me go back and get my badge”). Sounds funny, doesn’t it? Except he was British, and just sounded like an officious prat. The four on the beach swapped cat-calls and threats with the guy in the dinghy and eventually they came to a stalemate or a compromise depending on your point of view. He rowed back and they turned down their music. A bit.

After all the excitement had died down we read until the tide was lapping at our feet before taking ourselves back to the car. We drove back to Sturdies Bay for some dinner at a Thai food-stand. We braved the green curry. Ooh, ahh — a little too spicy perhaps? Note to self: don’t get over-confident about the heat of Thai curries in Canada.

Finally it was time (8.15 pm) to catch the ferry and leave the islands behind. Surprisingly it was one of the little open ferries and it pitched about a bit as we headed back to Tsawwassen. We sat out on deck, in a sheltered corner sipping a chai tea and waiting for the moon to rise. Forty minutes later and only 5 minutes from the mainland a deep orange moon crept from behind Mt Baker and made its way into the night sky. All too soon we were back on the road and heading for Vancouver. Soon to be home. Except we hadn’t actually driven back from the ferry before and we got lost in the back streets of south Vancouver. After a longer-than-expected detour we ended up on a road we recognized and, after breathing a sigh of relief, were at our front door within only a few minutes more.

We emptied the car, dumped stuff on the floor and had only one final thought that day: to sleep in a bed. Aaah, luxury!