It’s a 700-km drive from Vancouver to Mount Robson. The last time I drove that far it was from Canterbury to Inverness back in the UK. Somehow that trip took almost 12 hours, so although I was looking forward to the drive I was also a little concerned about how long it might take. Google Maps suggested about 8 hours driving time, so I was mentally prepared for about 10 hours.

We collected Andrew just before 6 am on a clear sunny morning, then Merewyn and were on our way by 6.30 am. Breakfast along the way: bagel and coffee while driving. Not optimal, but with light traffic at that hour and cruise control it was actually a pleasant way to enjoy breakfast. Our trip along Highway 1 was uneventful, Maria dozing off as usual :-), though we did encounter some dense fog near Abbotsford which stole our views of Mount Baker and the pointy North Cascades peaks. Then Chilliwack, Hope and on to the Highway 5, the Coquihalla connector. The first part gains a lot of elevation to Coquihalla pass and passes by some spectacular granite peaks. Well I enjoyed looking at them anyway. Not sure if any of the passengers saw the view, but I told them all about it later. Beyond the toll booth we stopped for a quick break and were surprised at how chilly it was up there! It was 8.45am and T-shirt and shorts were not enough clothing. Brrr. Back in the car asap and onwards over the Thompson Plateau.

Here the devastation of the Mountain Pine Beetle was obvious. Whole areas have been clear cut, I mean harvested to gather the wood before it becomes commercially unviable. And apparently the problem is much worse further north. Sad. An hour or so later and we approached Kamloops. And we all agreed that it seemed one of the ugliest towns we’d ever seen. It just sprawls all over the place and mostly looked unappealing. Passing through we continued north on Highway 5, following the Thompson River through a very pretty valley. We stopped for fuel at Barriere and lunch before continuing on.

The sun shone, the km mounted up, places on the map came and went. Clearwater and the gateway to Wells Gray provincial park were next. We’d been driving straight towards the peaks in the park for a little while and were surprised that the area wasn’t more mountainous. Still, it’s somewhere we have to visit at some point as it is supposed to be beautiful. More highway, twisty in places, the occasional RV or truck to overtake, criss-crossing the Thompson River. Moose signs. Ooh, moose? Well, we never saw any but we kept our eyes peeled. A long stretch with no towns, a few spectacular mountain peaks and glaciers and by late afternoon we reached Valemount.

We pulled in for a coffee and strudel stop, following the signs to the Swiss bakery on the far side of town. Wonderful fresh strudel (even though it’s not my favourite pastry) and a great cup of coffee to go with it. We sat on the porch at wooden table and looked across the railway tracks at the peaks beyond. What a way to end the drive. Finishing up, we drove the last 35 km to Mount Robson. I should add that there is a point where the road turns a corner, with a signpost for the Mount Terry Fox overlook, and you come face-to-face with Mount Robson. It looks huge. Absolutely enormous. Your jaw drops and you lose the power of intelligent speech. It is simply breathtaking. Fortunately there is enough time to hit the brakes and pull into the car park. Just wow! From there the mountain is ahead of you the rest of the way to the visitor centre, another 10 km or so. 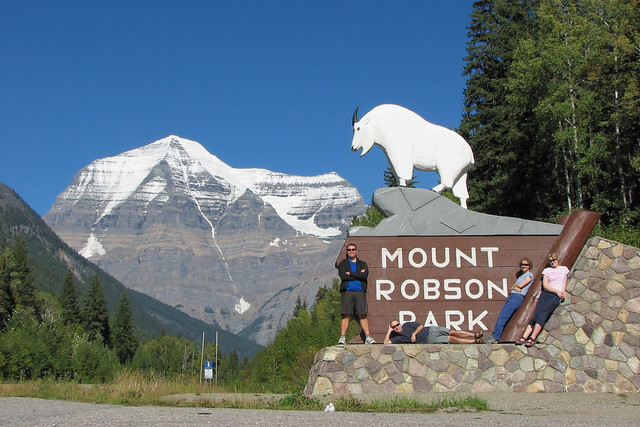 We headed for the visitor centre where we paid for our camping permit. Here we had to make the decision to spend our first night on the trail at Whitehorn campground (before the big uphill bit) or at Emperor Falls (after the big uphill bit). We considered the distance and the elevation gain and though that it would be worth pushing for the more distant campground. It would give us a shorter hike in to Berg Lake plus some extra time to explore, maybe go see Toboggan Falls.

We drove back to the Robson River campground and picked our spot, pitching our tents before wandering down to the river, the Robson River, to check out the view. And what a view! A beautiful ice-cold glacial-milky river, the first yellow leaves turning on the birch trees, an azure sky and a huge white mountain. We took pictures, and spent some time just sitting there soaking in the view. We were really here, and were really excited about our upcoming trip.

To end the day we drove back in to Valemount and ended up at the pub for a nice little pre-expedition (ha-ha) meal. Back to our tents and a good night’s sleep before another early start.