Wow! I don’t remember the last time a hike so clearly won me over. Cape Scott has been on our to-do list for years, and to be honest I wasn’t feeling particularly inspired as we set off on our 5-day trip. But between the gorgeous sandy beaches, atmospheric old-growth forests and peat bogs, the human history, and the great weather, this trip was an absolute pleasure and I’m now an enthusiastic proponent of this hike.

We spent 6 days/5 nights in the park to maximize our beach time, given that we’d driven so far. It can be done in 3 days (and we met a handful of folks doing just that), but that’s a pretty poor effort-to-reward ratio in my view. I would strongly suggest allocating 5 days to take in all the best of the beaches. That way you will spend more time out on the beach than among the trees!

Beach camping was great, and despite the number of cars at the trailhead, it never felt busy. The beaches were big enough for groups to spread out. OK so the sand got into everything but that’s to be expected! I re-learned my lesson from Nootka about not wearing sandals on the beach when the beach hoppers are around… Yuck!

Going in, the long section to Nissen Bight was long and painful with a full pack. Coming back, my feet got a bit fed up of the boardwalk after Eric Lake. Sure, it’s welcome respite from mud but after a while I found myself wishing for a bit of soft mud to walk through…

Don’t be fooled: the 15-17 km slog to get to the good stuff is exactly that: a slog. It’s part trail, part boardwalk, part old corduroy road, part mud. It really helped us to break it into pre-planned sections of about 1-2 hours’ hiking. The trail was in mostly excellent condition with very little mud to deal with. I didn’t even bother with gaiters. The boardwalk gets hard on your feet after a while, plus it’s hard to use your poles properly. Some of the older boardwalk is very slippery and not always secure! The corduroy road is horrible to walk on – the old logs are the wrong distance apart for pretty much everyone. The plank road nearer Cape Scott has quite a few loose planks too, but is mostly easy going.

With the exception of Eric Lake (OK but why would you?) and Fisherman River (don’t), the camping is on sand. Glorious beach camping! Even with regular tent pegs (stakes) we had no problems securing our tent in the firmer sand below the top layer. One minor annoyance at San Josef Bay was the most of the best tent sites had also been used for camp fires, so it was harder than it should have been to find a good site.

Water sources are, well, good enough. There’s decent running water at the far end of San Josef Bay, Nissen Bight, and Nels Bight. The water source at Guise Bay is a trickle. The water itself is fine, but has the colour of tea (or something that rhymes with tea) and a bit of a taste to match. You can get treated water at the Cape Scott lighthouse, so take your water carriers with you when you head out that way! The camp spots all have outhouses and food caches.

Entry/exit points to the forest are well-marked with floats and buoys. Tides weren’t an issue – we were there around the spring tides so we had plenty of beach to explore at low tide. Only at San Josef Bay will the tides make the beach route between the first and second beaches impassable. In this case there’s in inland trail, though we didn’t explore it.

The human history of the area is just as interesting as the nature. Do yourself a favour and print out the BC Parks pamphlet with the historical info and points of interest. We didn’t find everything listed, but between that and the information boards, it built it a decent picture of the Danish settlement of the area at the end of the 19th Century. Keep your eyes peeled for a few little unmarked side trails to find various remnants.

To my surprise, we saw quite a few flowers in the peat bog areas (which I enjoyed far more than I expected), particularly king gentian, swamp gentian, bunchberry berries, round-leaved sundew, and perhaps apargidium (which looks like a dandelion). In the forest there was plenty of foamflower, more bunchberry berries, and an unidentified saxifrage.

We had an up-close bear encounter on the beach as we exited the forest – it took over 2 minutes of soothing chatter to get it to move along far enough for us to hike out safely. We had one other near bear encounter – it ripped apart a log next to the food cache at Nissen Bight while we were on the beach not 20 m away. We thought we heard something crack in the trees, but didn’t think anything of it until later! Our closest wildlife encounter was with a mouse of some kind: there were half-a-dozen munching on the seeds of foamflowers, and were not the least bit bothered by us. I was able to shove the camera pretty close to them before they reacted. I even prodded one’s tail with my hiking pole and it didn’t budge!

Plenty of eagles and ospreys (sometimes the eagles bullied the ospreys for fish), a handful of falcons (possibly peregrines), wrens galore, seagulls (of course…), a kingfisher or two, and a handful of Steller’s jays.

Weather-wise we struck gold: it drizzled on us a little at the peat bogs around the 11-12 km mark (both directions!), we had one short-lived shower on the morning at Nissen Bight that kept us in the tent for an extra 20 minutes (no hardship really), and it was damp and misty on a couple of mornings. Apart from that, it was dry which is the best you can hope for out here. And the rain had held off long enough before our trip to dry out the trail too.

Remember to pay for your backcountry permit – the park rangers are checking!

The logging road in from Port Hardy is in good shape, though a little rough in places. Look out for logging trucks: they drive without much consideration of car traffic. We encountered two en route, one of which was a closer-than-I-would-have-liked call. You’ll also probably have to pull over to let locals pass. The road is signposted to Cape Scott on the outward leg but not Port Hardy on the return (follow signs to Holberg on the way out). However, most of the intersections are in your favour so you should be OK. If in doubt, record a GPS track on the way in. Don’t forget to stop off at the shoe tree around km 13 on the road. You’ll know it when you see it :-)

The stats below represent *all* the hiking we did according to our GPS (edited for garbage), including beach exploration and our treks to get water. The length of the main trail is about 15-20 km less. Yes – you read that right! With enough time to explore the beaches and side trails you can easily rack up another 15-20 km. I’m as shocked as you are… 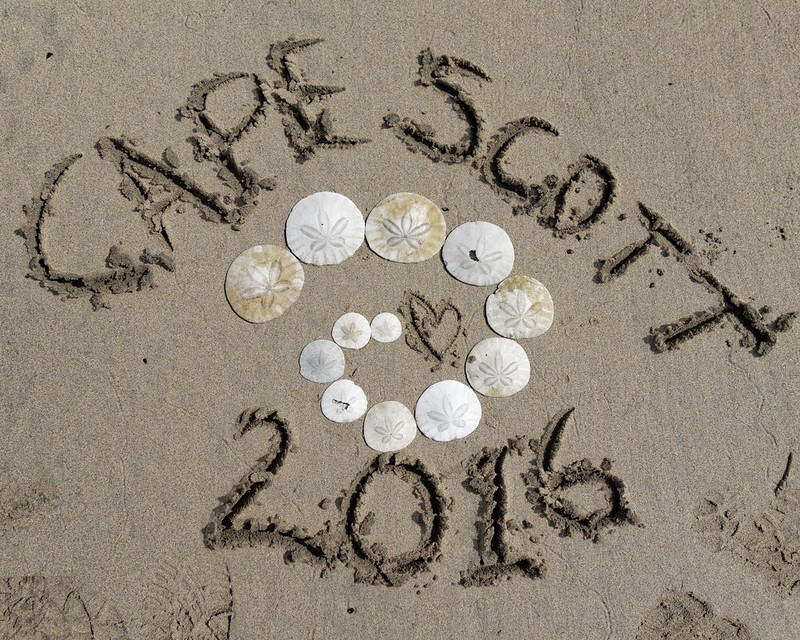 Where do I start? Ever since our first beach backpacking experience on the Nootka Trail back in 2006, Cape Scott has been on our list. Eventually it floated back up our to-do list and, with a bit of research, we decided to spend a full 6 days/5 nights on the trail, broken down like this:

Initially, we had planned to spend two nights at Nissen Bight, but on the suggestion of a friend, we packed up and headed over to Guise Bay instead for two nights. And it was well worth it! But more of that later.

Rather than turn this into an epic post, I’ll break the trip down into one entry for each day. Easier for me to write, and (possibly) easier for you to read!

Oh, and if you want to skip straight to the photos, here is the full set on Flickr or the slightly shorter Top 140.