Opinion
It’s a steep grind to get to that first rewarding view on Elk, but it only gets better after that with stunning views and immense wildflower displays. Going to Thurston is not to be done for the views, but the trail is quite wonderful and of course there are plenty of glacier lilies at this time of year. Like many hikes in the Lower Mainland, it is becoming ever more popular, so get there early to get a good parking spot.

Fact
The trail is snow-free all the way to the cairn, with only a couple of small patches on the way to Thurston. Pay attention here, though, as it would be easy to end up off-trail. There are km and half-km markers along the trail that I don’t remember seeing before. The last one I saw was 5 km, just before the section of forest that precedes the ascent to the cairn.

The trail is in good shape; steep as usual and tricky to descend in places without good footwear where the surface is loose with shale or gravel. I think the steps just before the first viewpoint are becoming increasingly undercut, making them more difficult than they used to be. I also think that the first open meadow near the windsock is showing signs of greater wear and tear. The trail beyond the cairn to Thurston is actually really quite lovely, despite the uninspiring destination. Occasional views of the Cheam Range are to be had, while Lady Peak is nicely framed by trees at Thurston summit. Signs point back towards Elk (3.5 km) and on to Gloria Lookout (4.5 km away), a relatively new trail.

The parking lot was full by 10 am, and cars were already lining the road. Unfortunately many people weren’t parking as close to the right-hand edge as they could have done, leaving barely enough room for cars to drive past on the left. We parked in a shallow pullout about 100 m from the trailhead. (When we returned there were parked cars for a couple of hundred metres down the road, showing just how many people had ventured on to Elk that day.) In terms of facilities, there’s an outhouse near the beginning of the trail (stocked with TP) and I saw for the first time a sign for an outhouse near the first meadows of Elk where a few camping spots exist in the trees.

A pretty good haul for the first day of June! 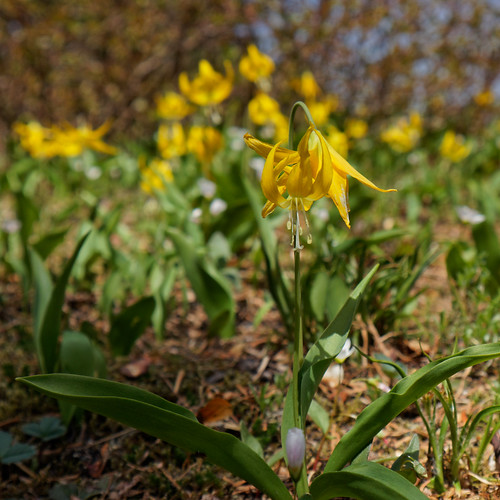